These days, it seems everyone is training to become something other than what they are. They want to be strong if they're weak, ripped if they're round, huge if they're shrimpy, or they want to build enough endurance to achieve an elite finish in a race they've never run.

This is all admirable, no doubt. But take people outside of the constraints of their sport, their gym, or their favorite Instagram filter, and they wither in the face of all kinds of personal, professional, and physical challenges.

Why? Somewhere along the line, they lost grip of their toughness.

Very few people possess both great strength and true toughness. Some of these rare individuals lead virtually 'normal' lives, and you couldn't pick them out of a lineup. Some ascend the elite ranks of professional athletes. I prefer these specimens spend their energy defending our country in the military or protecting others on our police and fire departments.

My favorite place to find one of these ultimate warriors is standing beside me when the shit hits the fan, and thankfully, I often do. Let's talk about toughness, what it is and isn't, and why you need to build it.

What does a tough man or woman need?

Far too many guys at the gym mistakenly believe size and strength automatically make them tough. Undoubtedly, this comes from the animal kingdom: size tends to intimidate. But some animals don't follow the rules. A 50-pound wolverine can fend off a 1,000-pound grizzly bear if it comes between him and a meal, or her and her young on the wrong day. Likewise, big gym bullies may rue the day they try to intimidate some little guy who thinks like a wolverine.

I'll admit the practice of getting one's body physically strong takes a certain amount of toughness. Stressing your body against heavy resistance, on a regular basis, is not an easy process. It's a brutal grind in the pain-zone to complete those vital final reps.

If you've ever fought through the urge to quit during a set of breathing squats or endured the burning in a high-rep set of calf raises, you know it's not for the weak of heart. But if you think that's enough to prepare you for the worst life can throw at you, you're sorely mistaken.

So what's the difference? One dictionary definition of strong is: "able to withstand great force or pressure." Look up tough, and you'll see: "strong enough to withstand adverse conditions." The two may seem interchangeable, but they're not. Toughness is strength and then some. It's strength forged by adversity. It's closer to strength coach Dan John's definition of fitness, "an ability to complete a task," but more like "an ability to complete the task," whatever the task might be.

One of the dog breeds said to be both strong and tough is the pit bull. In my extensive experience, it seems to me that it's pretty much mandatory for every gangbanging drug dealer to own one. My SWAT team has served many high-risk search warrants where these dogs were part of the intruder defense system.

I'll admit the practice of getting one's body physically strong takes a certain amount of toughness. Stressing your body against heavy resistance, on a regular basis, is not an easy process.

But get this: Despite their massive builds, very few pit bulls stand their ground when faced with the overwhelming aggression of a legitimate SWAT team entry. They tend to hide or run for the closest exit. The same often holds true for their big, ripped owners. After hundreds of SWAT missions, I noticed that these reported badasses seem to lose their nerve when faced with a true challenge.

Conversely, I'm reminded of a night the team had an armed standoff with this skinny dude holding the high ground on his front porch. He glared at us as I watched a flash-bang device explode at his feet. The concussion shook the entire neighborhood, but he didn't even flinch.

This is the type of guy that concerns me—the type of guy who seems to lack the ability to quit. I would sooner face a hundred hulking giants who are squeamish about combat than one little dude with an attitude like: "Is that all you've got?"

We Don't Need To Be Strong

For the vast majority of us, physical strength is not a necessity in our everyday lives. The process of becoming physically strong has become a choice ever since the advent of computers and automation.

Very few jobs still require physical strength. Most jobs favor brain over brawn and even blue-collar workers see their muscle be replaced by machines. Follow a team of warehouse workers for a day, and you'll find they probably walk 16 miles but never have to lift anything more than 20 pounds, because most companies have strict rules prohibiting lifting anything that could lead to an on-the-job injury.


Strength is even more of a rarity in our free time. Life gets easier every day, but people still complain about every little inconvenience. We live in a country where people take the elevator up to the gym to get on a stair climber. Parents tell their kids stories about what they had to endure "back in my day," but I have no idea what horror stories my kids will be able to conjure up to tell their kids about how bad they had it "when I was your age."

Of course there's an upside to this. In the absence of adversity, we have the privilege of choosing to eat healthily and to live longer, active lives. We can train to make ourselves more attractive. We tell ourselves we would have the strength to perform a task if the need arises, but mostly, I think we just enjoy feeling like we're strong, even if deep down we kinda doubt it.

The decision to "toughen up" is an even harder choice to make, because doubt goes out the window. If you want to be tough, you have to expose your weaknesses ruthlessly and eradicate them. You have to embrace challenges that are tougher than you—for now, at least—and spend your hard-earned time and money to do so. Your road to "tough" is like becoming a vegan or a Hare Krishna; it has to make sense to you, even if everyone else thinks you're nuts.

I believe that every living creature is born with its own level of strength and toughness. However, once you're a self-aware adult who realizes the value of toughness, you can also cultivate both of these traits with time and determination. Certain exercises can help, but the way you approach your training objectives overall is more important.

Want to know where to start? Build physical strength systematically however you wish, but mix it up with tests that push your limits, legs, and lungs in cruel and unusual ways. Make use of hills, mountains, bodies of water, and other natural landmarks that defy categorization.

Exercises to increase your toughness

Occasionally test yourself against reps that can't be counted, races against superior opponents, WODs dreamed up by sadists, or challenges that you know from the front end will make you hate life before you're finished. These are the sort of things I wish I had utilized when I was preparing for a TV adventure race.

To Fight or Not To Fight

You can't talk about toughness without talking about fighting. Some muscle-bound behemoth may be able to deadlift a townhouse, but if he's afraid of his own huge shadow, no one would describe him as "tough." 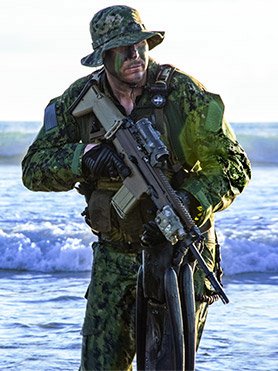 We need an unyielding determination to complete the mission regardless of the adversity we face.

Alternately, consider that the average Navy SEAL weighs in at 175 pounds and stands 5-foot-10. That's a far cry from massive, yet a SEAL is my ideal absolute tough guy because of what he can do with what he's got.

The Internet seems to back the idea that you have to be combative to be tough, since it's the kingdom of the tough-guy typist and the keyboard killer. School kids can choose to avoid any face-to-face contact in favor of engaging in anonymous cyber bullying.

Back in my day, kids wouldn't dare to openly talk smack about someone they feared, for concern of an actual confrontation. Today, why would @KickAssThug really need to be tough when he can Tweet challenges to @MikeTyson, all day long and he'll never need to back it up?

But here's the thing: You don't need to fight to be tough. You just need to have strength you're afraid to use, and you can access when you really need it. You can integrate some of this into your training in simple ways, but not easy ones, because nothing that builds real toughness is easy. You do your best to survive the worst, and then you trust it will work when you need it to.

I've never been a big guy but I have ingrained in myself the mindset that if someone tries to kill me, they'll need to cut my head off and hide it where I can't find it. I'll never quit. Those of us who have sworn an oath to keep others safe don't need to be big and strong.

We need an unyielding determination to complete the mission regardless of the adversity we face. That's the toughness we seek, and it's in the background of everything we do inside of the gym and out of it.

What's your mission, and how do you prepare for it? Let me know in the comments.

CrossFit Competitions: How To Prepare To Perform Your Best

The rules change once you're no longer a beginner, but your desire to keep growing and improving only gets stronger! Heed these six rules to maximize your results for the long haul.