As bodybuilders, our bone structure is the underlying framework for the physiques we construct.

We usually don't give much thought to our bones unless we break them. Because the only bones of ours we see on a regular basis are our teeth, it's easy to take for granted the incredibly complex network of supporting structures we call our skeleton. However, as bodybuilders, our bone structure is the underlying framework for the physiques we construct.

Even though Bobby Brady misled an entire generation of youth into believing that they could change their bones, (he hung from a bar in an effort to become taller on The Brady Bunch) the reality is that the proportions of our skeletons are unalterable. 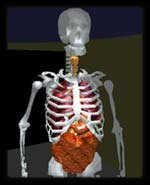 Ribcages can be deepened by supersetting high-rep breathing squats with pullovers, but beyond this all else is set in stone, or in this case, set in calcium.

So why bother to learn about our bone types? Simply because once you have identified your own kind of bone structure and joint size, you can tailor your training to maximize your personal "framework." Most people lean toward one of three types which roughly correspond to endomorphs, mesomorphs, and ectomorphs, which I have dubbed Jumbo Joints, Perfect Structure, and Bird Joints.

One thing will always give a Jumbo-Jointed bodybuilder away, and that's a wide waistline. If one were to draw a line around the clavicles and hip joints of a Jumbo-Jointed man, you would have a square shape, as the hips are generally as wide as the shoulders. These bodybuilders can diet down to shredded condition and have zero fat on the abs or obliques, yet they still are described as "blocky."

In shots like the most-muscular or side chest, they dominated with slabs of freaky, striated beef, but in the front relaxed stance or in shots like the front double biceps, they were unable to hide their wide waistlines and appeared to have little or no V-taper.

They often lost to men whose only advantage was a superior skeletal structure. And although the Jumbo-Jointed man may have 23-inch arms, they may appear smaller than those of a smaller-jointed man with 19-inch arms standing next to him. The larger the joints are, the less separation there tends to be between muscle groups. This is why Nasser El-Sonbatty can stand next to Flex Wheeler and outweigh him by over fifty pounds of muscle at the same height, yet not appear to be significantly bigger than him.

If you have the Jumbo Joint bone structure, there is actually quite a bit you can do to create the illusion of a smaller waist. Bodybuilding is a sport of illusion, so you might as well use every trick available to you. Your mission must be to keep the waistline small and make your shoulders and lats as wide as possible.

Avoid very heavy squatting and deadlifting, as these tend to thicken the hips and muscles around the waist. Do all of your abdominal work with bodyweight only, as very thick abs will only serve to expand your waistline further.

Never do exercises like weighted side bends, which will build big, thick oblique muscles. Next, work hard to have wide delts. This

translates to a lot of side lateral movements super-setted with overhead presses of all kinds. One of the above-mentioned pros actually wanted wider delts so badly to offset his wide waist that he showed up at his first pro contest with an odd fourth delt head, the result of some injected compound or other.

As for the lats, spend part of each training session performing wide-grip chinups. These will not only build up the muscles around the scapulae, such as the rhomboids and teres major and minor, but will also stretch the scapulae themselves to a degree. Dorian Yates, though he has a fairly large waist, had such incredible back and shoulder width that he successfully drew attention away from his flaw.

If you have a perfect bone structure, you probably know it already, you lucky sod. It is characterized by wide clavicles and a small waist, as well as ideal limb lengths. People with these skeletons tend to look athletic even if they don't exercise. If they weight-train and put some muscle on, forget about it. They usually look more like Gods than men or women. If you were to draw their

torso as a geometric shape, you'd end up with something that looked like an inverted triangle with a blunted bottom.

Examples of bodybuilders with perfect bone structures include Lee Haney, Cory Everson, Lee Labrada, Ronnie Coleman, Bob Paris, Gary Strydom, Matt Mendenhall, Francis Benfatto, Dennis Newman, Brian Buchanon, Steve Reeves, Chris Cormier, and Danny Hester. This is the ultimate framework with which to build a world-class physique on top of. If you have been gifted with such bones and also have small joints and long muscle attachments, then you are surely on the way to bodybuilding greatness.

Although those with Perfect Structures really don't need to concern themselves too much with waist size, they should still take care not to thicken the waistline and spoil the perfection.

Some great bodybuilders were nothing special to look at before they began weight training. These are the people I call Bird Joints. Others might call them skinny, stretch, runt, or scrawny. Bird Joints are characterized by two very distinguishing features; narrow clavicles and hips, and very light bones and small joints. Until they start packing on serious mass to the shoulders, chest, and back, it's tough for them to even be recognized as bodybuilders. Then, even at the peak of their mass achievements, they still often look like average people in clothes.

The fortunate aspect to having Bird Joints is that these are the men and women who create the grandest illusions under the stage lights. Tiny joints and swelling muscle bellies create deep muscle separations, what some call the "Marvel Comics Superhero Look." Often they beat competitors with far more muscle mass because they create the illusion of being much larger than they actually are. 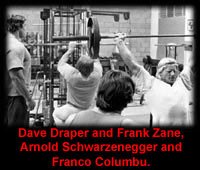 Some bodybuilders with Bird Joints who have successfully crafted championship physiques include Flex Wheeler, (the narrow shoulders were much more obvious when he was a lightheavyweight in 1989) Frank Zane, Thierry Pastel, Larry Scott, Jean-Paul Guillaume, Aaron Baker, John Brown, Steve Davis, the late Mohammed Benaziza, and Chris Faildo.

Typically, this bone structure type also corresponds to a difficulty in gaining muscular bodyweight. Obviously, several of the above-mentioned pros solved that problem through years of dedicated heavy training, eating, and supplementation.

For the bodybuilder with Bird Joints, mass is the key. The more mass you can pack on overall, the less of a visual handicap your narrow clavicles will be. Build up the shoulders and back, and also the lower and outer quads. The narrow waist and tiny joints are actually a blessing, as it will make every pound of muscle on your body look like three pounds. Often slender-boned bodybuilders of 190 pounds are mistaken for 220 pounds or more due to this illusion.

Aside from the standard three bone structures, there are also those with unusually long or short limbs. Some men have done well despite having long torsos and short arms and legs. Three examples that come to mind immediately are Lee Priest, Mike Matarazzo, and Skip LaCour. Long limbs are probably the worst bone trait to have, as they make the illusion of a densely-muscled arm or leg almost impossible.

The NBA is full of men with 20-inch arms, but because professional basketball players tend to be six and a half feet tall or more with very long arms and legs, their arms look no more impressive than the average bodybuilding novice. Ralf Moeller, now seen on the syndicated "Conan" TV series, was frustrated during his bodybuilding career to be told that his arms and legs appeared too small. This was perplexing because at 6'5' and 285 pounds, his arms were well over 22 inches, and his legs over 32 inches.

There are many different types of bone structures in the human race. You may lean toward any of the three main classifications I have discussed, or even appear to be a combination of two. In the end, you can build a great physique on any type of skeleton, as evidenced by thousands of bodybuilders whose bone structures were as wildy different as their faces and muscle shapes.

The key is to identify what your own bone structure is, then make the most of it through intelligent training. Don't just blindly train and hope for the best. When builders construct a house, they do so based on a blueprint that starts with the framework. Mother Nature has already given you your framework, now get in the gym and construct the best physique you can!

Reprinted with permission from eMuscleMag.

Great articles on nearly all aspects of bodybuilding to help you succeed.