Reinventing The Wheel! A New Training Philosophy For Killer Leg

My training philosophy has changed from how much weight I can put up to how I can achieve the same level without having to resort to lifting heavy.

One of the most neglected body parts in gyms today are, drum roll please; yes, you've guessed it, legs. However, if you are an athlete, regardless of your chosen discipline, leg training is a necessity. Football, rugby, and soccer all require a great amount of strength, speed and stamina from the lower extremities. Saying this, the need for leg development is most obvious in the sport of bodybuilding.

How many times have you opened a magazine and seen pictures of guys with awesome upper body development, but lacking in legs? Especially when you go to the beach, you will notice numerous guys walking around in their board shorts, with what I call, the light bulb effect. And no, I do not mean that they generate good ideas or that their physique is so radiant that in some way they are illuminating.

The light bulb effect is nothing more than a descriptive analogy - real small in the lower portion, swelling out up top. From day one in my bodybuilding life I have loved to train legs. I remember as a young kid of 8 years old watching the Golden Eagle, Tom Platz, train in my Dad's gym, chalk dust everywhere, the weights clanging together, rattling with each and every rep and the bar bending under the pressure caused by the hundred's of pounds on the bar. I have been inspired to blast out some real hardcore leg workouts ever since using that image of the man with the Million Dollar legs ever since.

That being said, 22 years later and I still love to train legs, and nothing short of hardcore will suffice. But my training philosophy has changed. No longer is it all about how much weight I can put on that squat bar, watching the bar bend as I go through my reps, or loading up the leg press until I can't fit any more weight on there.

It was actually doing leg presses that caused an injury, which forced me to reevaluate my leg training regime. I was training in Gold's gym, 6 weeks out from the IFBB European Championships, hitting legs like it was my last day on Earth. I had about 1,200lbs on there and banged out 20 reps. To say I was feeling good that day would be an understatement of titanic proportions. I went on and loaded another 3 plates each side, 15 reps for that set. I was feeling great and psyched that I was moving some serious weight for reps! So I threw on another 2 plates each side, bringing me up to around the 1600lbs mark.

5 reps into my final set and my right knee felt a sharp pain and gave out. The pain that I felt was so severe that I had first thought I ruptured my patellar tendon. Little did I know that when I braced my knee using my hands that the sudden release of pressure on the foot would cause the natural arch to return to normal and that that would create 1600lbs of impact pressure (and that's not taking into account the rate of acceleration due to gravity - 9.14m/sec). This caused 4 fractures to the 3rd and 4th metatarsal bones in my right foot. Six weeks out from the biggest show of my life, this injury could have been the sinking iceberg to my dream of being an international bodybuilder.

Coming into the European Championships, I had to train around this injury; after all I was only 6 weeks out from the show, so basically I did what I had to do to make it to the stage. However, after the show I had the foot repaired and got back training, albeit with a new philosophy.

This new training philosophy, which I implemented into my leg training, was pretty much compensatory. That is, how can I achieve the same level of stress on the muscle, without having to resort to lifting heavy weight? To compensate for the lack of weight I decided the only thing to do was to increase intensity, by minimizing the rest time between sets. I also focused more on absolute perfect technique on each and ever rep, squeezing real hard during the concentric phase, and going slowly through the eccentric phase. This method maximizes the time under tension for the muscle. 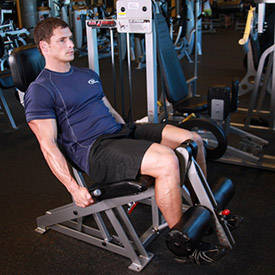 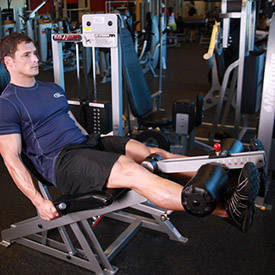 So how would a typical workout look for me using this method?

The workout would start out with a 10 minute warm up on the stationary bike, followed by approximately 20 minutes of dynamic stretching, which I find to yield great pumps throughout the workout. Once the stretching is complete, I would perform the initial sets on the leg extension, up to 20 repetitions on the first set, then 15, 12 10 then 8 for the final set. The emphasis here is to focus on the contraction, fire up the weight fast, holding it in the extended (flexed) position for the count of 2 then down slowly through the eccentric (negative) phase of the movement. When on the final set it is advisable to have a training partner to assist with the forced reps at the end as the muscle fatigues.

After this set is complete, it is time to move onto the leg press and squat rack. Perform a single warm up set on each exercise, and then load the weight to the desired amount. Remember, we are emphasizing the full range of motion here. I would perform 30 reps on the leg press, then get up move into the squat rack and go for 20 reps. The weights I would use were relatively light considering my previous pre injury workouts, however, 30 reps with 600lbs on the leg press followed by 235lbs on the squat for 20reps will blow anyone's legs into oblivion, especially after pre-exhausting the quadriceps with leg extensions. Two sets of this were the usual, with 3 sets on a good day.

Now that we have annihilated the quads, we have to move onto the hamstrings, where the principal remains the same here. The leg curl machine is where we start, and do exactly the same thing as on the leg extensions, 15, 12, 10 & 8 reps utilizing your training partner for some forced reps. The second exercise I go to then is the stiff leg deadlift, when done correctly this can add some serious mass to the hamstrings. The legs should be shoulder width apart pointing forward. As you bend over, only go to the point where the back begins to round, this is the lowest you should go. As you return to the start position, only return 3/4 of the way before you begin to lower the bar again. This will keep the tension on the hamstrings and glutes, and minimize lower back involvement. 3 sets of 12 are plenty on this exercise. 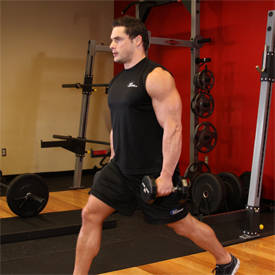 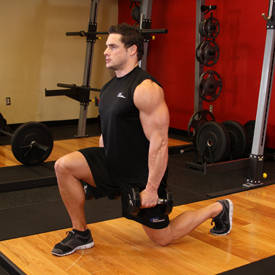 From time to time I will add in some walking lunges, and other times I will substitute them for the stiff leg deadlift. In modern bodybuilding glute development can be the difference between winning and loosing a contest. And besides, it's also good for the ladies. They all like a man with that "bubble butt". It can also help to have strong fit glutes in the bedroom, after all, there is no point having a nail to hit if the hammer can't drive it home!

The final part, and in my opinion the most vital part of leg training is calves. From a visual perspective the calves are what make the leg. I cannot think of a single example where there is an athlete with great calves and the opinion was that his/her legs were poorly developed, even if they had not so great quads. That is not to say that merely because they have good calf development and there thigh development is up to standard, it merely creates the illusion, and after all, isn't that what bodybuilding is, the illusion of a great physique.

I alternate each workout. I might do standing calves one day, seated another. But the basic principals of my leg training still remain the same, focusing on the stretch and squeeze. Holding the contraction for 2 seconds. A point to note here is that your calves are used to doing a massive range of repetitions on a daily basis. If you think of it, they complete rep after rep with your own bodyweight with each and every step you take. This means that your calves are able to sustain a lot of punishment. I never go below 12 reps on any calf exercise, and I love to utilize strip sets, keeping the pressure on the muscle.

So there you have it, my fast paced leg inflating workout. It was born out of necessity, and turned out to be a blessing in disguise. Since I began this workout, my leg development has improved dramatically. They are more balanced, fuller, and more defined than they have ever been before. This is what worked for me and it can work for you!