Service members give their time, their bodies and lives to service. Some leave fingers on foreign soil. None are left behind. None are forgotten.

In the face of devastating loss, the easiest thing to do is give up. A new, daunting challenge seems like a curse of permanent inability. The promises of the future deflate into in depression. But it doesn't have to be this way.

The week before Memorial Day, 2009, Staff Sgt. Corwyn Collier of the U.S. Army National Guard lost his career, his muscles, his fingers and his ability to walk. His Humvee was struck by an explosively formed penetrator (EFP), a precise form of an IED used in Iraq and Afghanistan. 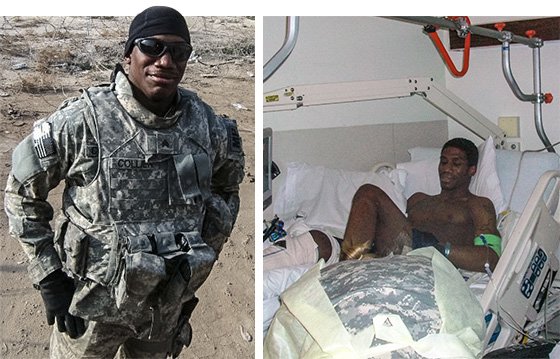 Yes, he lost some things. No, he did not stop living. He found a new way to live, to lift. He re-learned to walk, to tie his shoes; he proved doctors wrong. He refused to be disabled.

Q
How Did You Get Started in Bodybuilding?

I have always been athletic. I went to college on a track scholarship before joining the Army. Lifting now is a way for me to stay competitive with myself and not to feel handicapped.

It was not a hard transition for me since I was in the [Army National] Guard. The hardest transition for me was figuring out what I wanted to do with my life after spending nine months in the hospital. It was then I decided to go back and get my master's degree in education and become a teacher.

Will You Please Describe Your Duties in the Military?

I was a military police so my duty while on tour was to help the Iraqi police train and be prepared to take over their country once we had completely pulled out.

I was on tour in 2009 and I had the goal and dream of trying to get one more shot at the Olympic trials for 2012. So while I was over there, if I was not on mission, I was in the gym putting in work and constantly running. Being in shape is one of the main reasons I'm still alive today. Doctors said normally with the blood loss I experienced most people would not have had a strong enough heart to survive. I take fitness serious, especially when it comes to preventing future problems.

Seeing as I was in the National Guard, I was already in the insurance field. I'm grateful for my deployment because it allowed me to switch over to teaching, which is something I have a strong passion for because of my wife and her career as a teacher.

Has Your M.O.S. Positioned You for a Career After the Military?

Being a military police has made me more aware, so as a teacher I can see and hear everything. It has also given me greater leadership ability. Being a team leader for an MP team is great responsibility and you have to be able to set an example as a leader.

I think each branch feels they have their PT studs, but it really comes down to the individual and how much work they put into it.

The accident happened on May 23 2009. We had just finished our mission at the Iraqi police station. I was in the lead vehicle on the passenger side. We were almost out of the city when an EFP (more powerful IED) went off and hit my truck.

At first I had no idea I was hit. After I scanned the truck and noticed my driver was a little shook, I continued to look and saw that my door from top to bottom was covered in blood. With me being left-handed, naturally my weapon sat in the middle and I pulled my right hand up and noticed it was completely mangled.

The contractor who was with us in the truck began first aid on my hand. I was in disbelief pulled my hand back just to check again. The door was completely caved in, as well as the dashboard. I had about four inches of wiggle room. I had no idea I was sitting in the bomb and it was burning through my legs and it severed my artery and I was bleeding out.

My squad engaged in a firefight with insurgents while trying to reach me. I had to help call the medevac. Once they got to me, they had to pull me out, which caused more damage to my leg, but it had to be done. Once I reached the hospital, and they took the tourniquet off my leg, I passed out from a loss of blood.

Initially they told my wife I wasn't going to make it. Eventually they got my heart started again and blood back in me. I had lost so much blood they had people donate on site. Two days later I woke up in Germany with no idea what had happened the past 48 hours. They eventually brought me home to Walter Reed Army Medical Center, where I recovered over the next nine months.

The biggest obstacle is being away from family. When you have young kids and you miss big moments in their lives that you can't get back, it hurts.

How Important Is It to You to Perform Well on a PT Test?

The PT test was important to me. For me it was just as important as know how to shoot and being able to think on your feet. If you are out of shape as a soldier you can hurt the team.

Everybody loves a good cookie or piece of cake, but when you have a fitness goal in mind you must to be able to sacrifice it for the end goal. We sacrifice a lot in the military, so it actually makes it easier with fitness in my eyes.

Do You Think It's More/Less Difficult for Military Men to Stay in Shape, as Opposed to Civilian Men?

I think it is an individual thing. It is easy to live a sedentary life being both military and civilian. Granted in the military you have to take a PT test, but you don't have to be some fitness stud to do so.

Gender Roles Are Changing in the Military. How Does That Affect You?

It doesn't affect me at all. As an MP I served with some bad-ass female MPs who would put some men to shame. If they can do it, let them do it.

Fitness allows for you to score better on your PT test, endure long tough days, and meet rigorous standards.

How Would You Evaluate Your Recovery and the Treatment You Received?

My recovery has been tremendous. Walter Reed Hospital (in Bethesda, Maryland) did a great job putting Humpty Dumpty together again. Even though doctors doubted how much progression I would have, I continue to get stronger and better. Physically I'm probably in the best shape I have been in years and stronger than ever before. Psychologically it has its moments and it mainly has to do with the fact that I will never be a sprinter. But I get a joy out of watching my sons compete in track now. 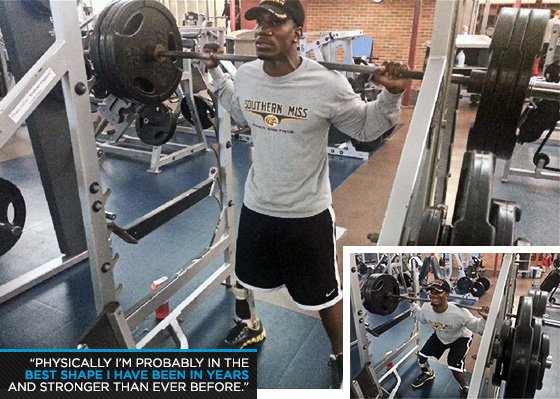 You Said You Don't Want to Be Called "Disabled." Can You Explain That? What Have You Done to Enable Yourself?

The biggest word of encouragement that was given to me was "it's not about the disability, but the ability." That has stuck with me as I push and strive to hit new goals in the gym. As a father and teacher I want to show my sons and students, that no matter how large the obstacle you can overcome it. I always say: "Don't let your current situation dictate your future." It was hard at first but I modified and studied and took the support from my wife and kids to keep striving. 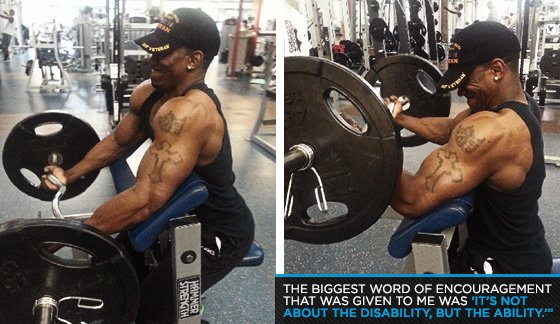 Water and vitamin water throughout the day.

Which Supplements Give You the Greatest Gains?

What I use: Whey protein and creatine.
How I use them: I take the creatine right after my workout and wait 20 minutes to take the protein. 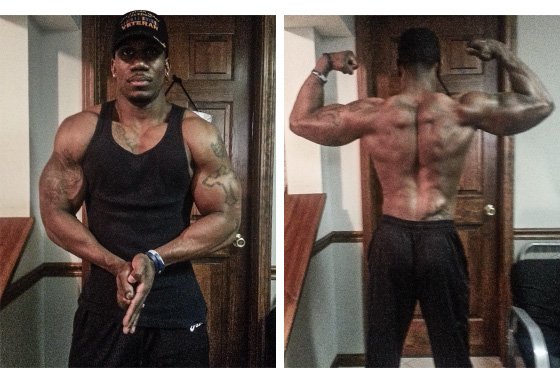 Because I'm lifting to bench press competitively in the Paralympics, I don't really have a favorite bodybuilder. I'm more into the fitness aspect of the sport. I look to guys like Lazar Angelov and Greg Plitt. I'm also a big fan of the Dwayne "The Rock" Johnson.

What One Tip Would You Give Other Strength Athletes in the Military?

Don't give up. If I made all of these gains and I'm limited physically, there is no limit to how far you can go.