Back in 8th grade I played my first year of competitive football. I did horrible that year, and I promised my dad I was going to start my freshman year. So the summer of 2000 he bought me an old weight bench with the lat pull-down machine and leg extension at bottom end of it, with the front end being a typical flat barbell bench. He also bought me a tub of creatine and protein.

Not knowing any better I did a full body workout almost every day that summer, I would push, pull and curl until I could no longer complete another rep! By the end of the summer I could bench all of the plastic coated concrete plates that came with this contraption I had fallen in love with.

Not only did I start that year, I learned a valuable lesson. You could do anything you put your mind to! My love for football eventually faded, however; my passion for weightlifting began. Throughout my high school years I continued to lift-and my body responded rapidly. 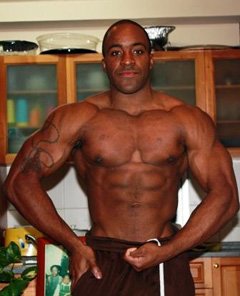 Fast forward past basic training in 2004 and I found myself at my first duty station, Misawa Airbase Japan. Here, I met my first training partner Michael Gonzales. The training sessions we had together were extremely intense, but I loved every minute of it. He would explain in detail the mechanics of every lift so I knew why we did certain exercises.

After about 4 years, I PCS'd to Osan Airbase Korea. Here, I met Bodybuilding.com's previous bodybuilder of the month Shawn Wolfe! Not only did he teach me the importance of your diet, but he encouraged me to compete. Utilizing everything Mike and Shawn taught me, I found myself on stage at my first show located at Kadena Airbase Japan, which is where I am currently stationed. I won my weight class and met some amazing competitors!

What Is The Hardest Part Of Making The Transition
From Civilian Life To Military Life?

My dad is prior Army, so discipline has been instilled in me my whole life. So making that transition from civilian to military life was fairly easy for me. The hardest part would be being stationed in a different country for my first duty assignment. Being so far away from my family was hard for me initially but I have adjusted over the years.

What Is The Biggest Obstacle In Leading A Military Lifestyle?

Getting called in on the weekends during contest prep with no meals cooked! But you learn to adapt and overcome extremely fast. 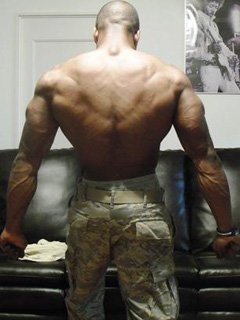 My future plans for bodybuilding include obtaining my INBF Natural Pro Card either late this year, or early 2012 and possibly entering some power lifting competitions.

What One Tip Would You Give Other Bodybuilders In The Military?

Be patient and don't expect results over night. Develop a plan, train hard, and never get "too big" to receive advice or constructive criticism.