Although Megan has always had that certain 'Je ne sais quoi' about her, when she got the biggest role of her career, she had to pull out all the stops... Here's the workout she used to get lean and mean for Transformers! Learn more.

This summer's big blockbuster is set to be, none other than the sequel to one of the best action and visual effects movies of all time, Transformers. The movie launched the super hot Megan Fox into the Hollywood elite.

Although she has always had that certain something about her, when she got the biggest role of her career, she had to pull out all the stops and transform herself from merely just another hot bodied young Hollywood starlet to the "she's so hot she would give a dog a bone" sex siren that she has become.

Fox has even been tipped to replace Hollywood icon, and one of the world's sexiest women, Angelina Jolie, as the voluptuous Lara Croft in the next Tomb Raider movie. 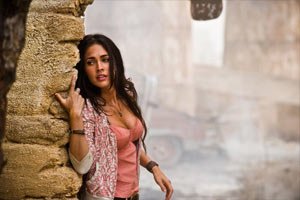 Not too shabby for a girl who is barely in Hollywood a week. I know a lot of you readers, especially the women, are thinking, "Come on, she's young, she's got the genetics and she probably had a little nip/tuck here and there." Guess what, you are all 100% correct.

Megan Fox is young, she has good genetics, and she has also had a little bit of nip/tuck. Just so you know, she has had rhinoplasty and some lip injections!

But none of that can give us a good explanation as to why she looks so lean and mean in the Transformers movie. And let me tell you, getting chased by Megatron had very little to do with sculpting those buns of steel. I bet he wished he wasn't a robot in some of those close up scenes.

The workout is pretty simple, yet it is not for the faint of heart, which is a little bit of a conundrum as Fox was alleged to have said that she is so lazy she will not even make the trip to the gym, the trainer has to come to her. Wow, now that's lazy! 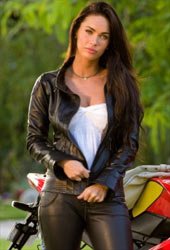 Click Image To Enlarge.
The Workout Is Pretty Simple, Yet
It Is Not For The Faint Of Heart.
© DreamWorks - 2009.

So what does that mean for her workouts? Well, her workouts are blend of interval and low intensity cardio work and lots of abdominal and core work.

To begin the Megan Fox workout, start out on the floor to begin the core circuit. Ensure that you are on a padded surface, either carpeted or on an exercise mat. The circuit itself is time based, that is, you should try and achieve maximum repetitions within the given time frame, in this instance it is 30 seconds.

The rest period between exercises should be kept to a minimum; it really should only be the amount of time that it takes you to get into position for the next exercise.

For instance, should you be performing abdominal crunches, then decide to perform supermans, you literally need only move from laying on your back, to laying on your front. That is about the same length of time that it takes Bumble Bee to transform from his robot self into a Camero. 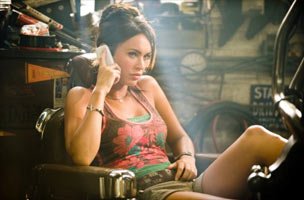 Click Image To Enlarge.
The Rest Period Between Exercises
Should Be Kept To A Minimum.
© DreamWorks - 2009.

As you can see, there is a circuit of 10 different exercises, hitting all the muscles of the lower trunk, or, the core muscle group. Each exercise should be performed for 30 seconds before moving onto the next exercise.

The circuit should be performed at least 3 times, taking a 90 second break between circuits. The goal is to improve the rep range achieved each week. For this you should use a training journal to record your progress.

The second phase of the workout is cardiovascular, and for this portion of her training Megan Fox likes to use her stationary bike. Since the pace of the circuit training for Megan Fox is at a high tempo, it is classed as interval-style training.

This increases the heart rate rapidly, but only for short bursts, transforming your body into a fat burning furnace. The stationary bike is like having a canister of gasoline that you can throw onto the fire, and burn your body fat into oblivion. 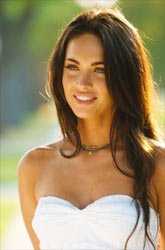 Click Image To Enlarge.
For This Portion Of Her Training Megan
Fox Likes To Use Her Stationary Bike.
© 2009 - DreamWorks.

Once you have gone through the final 2 minute recovery period, keep the resistance level at around level 3 and cycle at a moderate pace for a further 30 minutes. In no time you will have your body functioning like a finely tuned machine that even the Autobots would envy.

Like any training plan, the success is limited and dependant upon the nutritional support we give it, and for Megan Fox it is no different. She likes to stick to a healthy diet. She tends to avoid processed and whole grain foods, and tends to stick to vegetables and fruits as her source of carbohydrates. 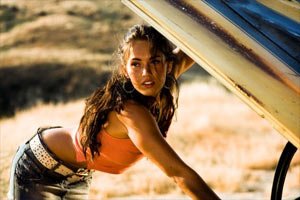 For her protein requirements, fine foods like eggs, meats, fish and nuts are incorporated into her daily diet plan. Keeping the levels of healthy fats at a moderate amount. She likes to snack on almonds throughout the days to keep energy levels high.

Another little secret weapon that Megan Fox has implemented is the use of cider vinegar. This is an amazing fat burning tool, which also acts as a mild appetite suppressant and is also a great detoxifier. Both my uncle and I have been using this, to great effect, for years getting ready for bodybuilding contests.

You simply add a few tablespoons of it to a glass of water and drink it down. I however, tend to smother my salads with it. Either way, it is an awesome natural way to boost metabolism.

So with the training style and nutritional know how at hand, you have got the tools needed to get into the best shape of your life. 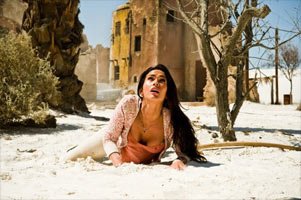 Click Image To Enlarge.
You Have Got The Tools Needed To Get
Into The Best Shape Of Your Life.
© 2009 - DreamWorks.