To learn how to train abs properly and thus attain maximal results, it helps to clearly articulate three fundamental principles.

Everyone wants nice abs to display at the beach during the summertime or have something to show off in a half shirt other than a protruding mid-section. 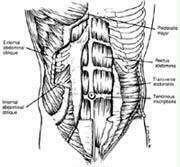 However, very few people actually train their abdominal muscles and of those people, even fewer know how train them correctly. To learn how to train abs properly and thus attain maximal results, it helps to clearly articulate three fundamental principles.

First and foremost, the abdominal muscles cannot fully contract with air retained in the lungs. Thus, those that hold their breath while performing crunches for instance, never attain a full muscle contraction.

To correct this error, exhale upon exertion through every rep and remember that once the air in your lungs is gone, the abs are fully contracted. If you watch people perform sit-ups, you will invariably observe them coming up to a full upright position at the end of the movement.

While the abs may have initiated the movement at the outset, at some point the hip flexors took over to pull the torso into a full sitting position.

If you exhale when you initiate the movement and stop when the air in your lungs is gone, then you are relying upon the contraction within the abdominal muscles to begin and complete the movement as opposed to relying on the hip flexors and gravity.

Second, unlike other muscles in your body that may take a few minutes to fully recover after a set, abdominal muscles recover within seconds. Because the recovery time is so short, abs respond best to continuous movement. Your abdominal routine should therefore entail continuously moving from one exercise to the next until complete exhaustion.

Those people that claim to work out their abs for any more than five minutes are taking too much rest in between sets. Try continuously moving from one exercise to the next without more than a few seconds of rest in between each set to really hit the abdominals.

Third, work the lower abdominal region first. I prefer to begin with something like reverse crunches or ">leg lifts because the moment that you tighten the lower abdominals, all of the abdominal muscles immediately tighten to stabilize the rest of your body in preparation to execute the movement.

If you worked your lower abdominal region until exhaustion, then do not be alarmed when you cannot perform too many trunk twists or crunches. Remember that the amount of rest that you take in between sets should be just that amount of time that it takes you to change positions to begin the next exercise. Continuous movement is key to training abs.

Don't fixate on the number of crunches that you can perform. Instead, concentrate on exhaling on exertion and contracting the abdominals to initiate and complete the movement. In fact, don't even count the reps - simply execute the movements in succession until you literally cannot force another rep.

Getting The Abs To Show

Finally, to really get your abdominals to show, you must diet and include aerobic exercise in your routine. Exercise without maintaining a diet rich in protein to enhance muscle development, is like having a car without an engine; you get absolutely nowhere.

You can work your abdominals every day that you are in the gym. I suggest, however, specifically working them three times per week. Because your abdominal muscles are responsible for stabilizing your torso, they are the secondary muscles involved in many different exercises.

Consequently, even though you do not specifically train your abdominals, they nevertheless work to some degree in every one of your workout sessions anyway.

In summary, to enhance your abdominal workout, abide by these few principles:

Finally, adhere to a diet rich in protein and religiously perform exercise for cardiovascular endurance and watch your midsection really shape-up!