The squat is a very powerful exercise. It is one of the only exercises that will work 75% of your muscles with one, single movement. The squat should be one of the primary movements in any leg workout. There are many varieties of squat...

The squat is a very powerful exercise. It is one of the only exercises that will work 75% of your muscles with one, single movement. The squat should be one of the primary movements in any leg workout. There are many varieties of squat that can be performed to make workouts interesting and prevent plateaus or stagnation.

The traditional squat should be one of the first squat techniques to learn. In this movement, the bar is placed high on the back. This is sometimes known as the bodybuilding squat. The shoulder blades should be retracted to help support the bar. Wrists can either be rigid or extended power-lifter style, depending on flexibility. Keeping the elbows beneath the wrists can be important, because outside of this position, the shoulder may rotate. This can impinge the rotator cuff and may actually pinch a nerve and make the arm go numb for some people.

Stance is just about shoulder width. Foot orientation is "natural". When you are standing casually, this is "natural". Most people will find that the feet are pointed slightly outwards. This is fine - in fact, forcing the feet to point straight ahead can place enormous torque on the knee joint and cause injury. I have had surgery on my right anterior cruciat ligament, and as a result, my right foot is exaggerated - it points at about 2 o'clock. This is my natural stance - right foot pointed more than the left - because the surgery has altered my leg alignment. Trying to force my leg into an unnatural alignment would only cause injury. 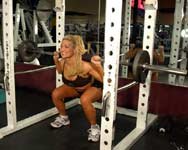 There is much debate about proper alignment of the hips when performing a squat. Slight lordosis is typically recommended - this means the back curves inward slightly and is not rounded. This engages the spinal erectae, or muscles that protect the spine. A neutral hip position can also be used. For the neutral hip position, you simply rotate the top of the pelvis back and bottom of the pelvis forward to flatten the back. Do not exaggerate this movement - too much of a "thrust" and the back will round - just use enough rotation to make the back neutral. Keeping the head facing straight ahead with respect to the torso rather than looking up or down also helps align the spine and protect it from injury.

Descend as if you are sitting in a chair. A common mistake is to allow the knees to bend so far that they extend well beyond the toes. The bodybuilding squat places a bit of stress on the knee joint, and the farther the knees track forward, the more stress is placed upon the joint. By "sitting back" so the weight is transferred through the heels rather than the toes, you assure that tension is on the quadriceps more than the knee joint. It takes balance and flexibility to execute this movement correctly. Some people place their heels on blocks. While this improves balance, it is a compromise for lack of ankle flexibility. A better approach would be to address the root cause (lack of ankle flexibility) through stretching, rather than to eliminate the symptom by using blocks.

Descend as far as you can go without the knees tracking forward excessively or the torso bending too far forward. Most people through practice and with appropriate flexibility can descend to thighs parallel or beyond. There is nothing wrong with going below parallel if you are healthy and your flexibility and strength allow this full range of motion. If your torso begins to bend forward, beyond 20 - 40 degrees or thereabouts, you are at the limit of your range and should stop the movement. Excessive "lean" simply places extra stress on the lower back and can lead to injury. Try to maintain the torso as erect as possible - perfectly vertical is ideal but a slight angle is common. 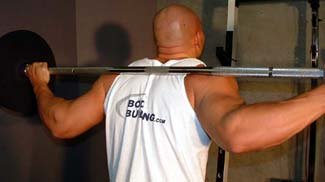 Again, descend as if "sitting back into a chair" and let your body dictate the proper range of motion. Shooting for parallel is ideal but do not exceed your body's parameters - if your ankle flexibility, lower back strength, or other factors prohibit the full range of motion, then an abbreviated range is necessary until the supporting muscles are strong and flexible.

A bar position between the previous two is known as the athletic squat. This is a compromise between the bodybuilding and power-lifting varieties of squat. 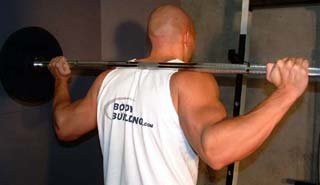 The athletic squat is a trade-off between stress on the knee joint and stress on the lower back, and is a great movement to use in various phases of training.

Taking an excessively wide stance is necessary to perform the sumo squat. Do not try to keep your legs pointed forward during this movement. If you try to bend at the knee with a wide stance and feet pointed forward, your leg will twist at the knee joint. This not only stresses the joint, but also stretches the ligaments and can injure them.

Feet should point farther out than your natural stance, so that the leg bends in a plane that does not allow twist or excessive torque on the knee joint. The sumo squat will employ more muscles in the inside of the thigh than the traditional squat.

Another variation of the traditional squat is the box squat. In this movement, you squat until you are sitting on a platform or box. This is typically placed just at or above parallel. It is essential that you transfer all weight to the platform, pause, and then drive upwards. This technique works the weakest range of motion by forcing you to have a "cold start" from the bottom. Squeeze the glutes to drive upward and keep the torso as vertical as possible (many people make the mistake of leaning forward before driving up from the platform, and this may lead to injury). 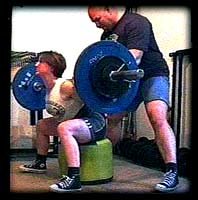 The box squat will employ more of your hamstrings and glutes than a traditional squat, but helps strengthen the weakest range of motion and is sure to help you increase your maximum squat poundage. By transferring your weight completely to the platform, you eliminate the "stretch-shortening cycle" which uses "recoil" or "spring" energy to help drive back up from the bottom of a traditional squat.

Squatting against the wall is known as the ski squat. Step about 2 feet away from a way, take a natural stance, then lean back onto the wall. Support that position for 20 - 60 seconds. It is important to work this movement through all ranges of motion, because you will only gain strength in the range that you are working. 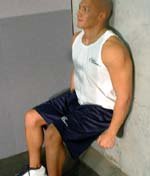 A common practice is to keep the start position, then slide downward a few inches and maintain that position for 20 - 60 seconds, then slide down again, etc, until you finish the last "rep" at parallel or below.

A front squat involves placing the bar across the anterior deltoids or the front of your shoulders. If you have sufficient wrist flexibility, you can grasp the bar and allow the fingers to bend back towards your body to support the bar. Many people lack this flexibility and must use an alternate method. This involves crossing the arms and then lifting them to support the bar. The front squat forces the torso to remain nearly vertical. 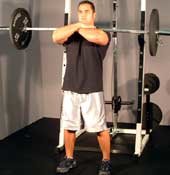 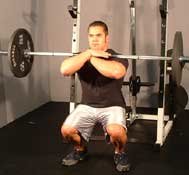 The location of the bar shifts the center of gravity and assures that more tension is placed on the quadriceps. Because most people lack the upper body strength to handle heavier weights, this movement is typically a periphery movement - not enough weight can be loaded to make it an effective primary movement.

Stand on the bench and grasp a single dumbbell. Now, taking a wide stance, squat down with the dumbbell dangling between your legs. Lower yourself as far as your flexibility and balance permit, and then drive back up to just short of lockout. This is known as a plie squat.

Like the sumo squat, it can help work muscles in the inner and outer thighs that don't receive as much attention in the traditional squat. The advantage of a plie squat is increased range of motion when you are elevated on a bench.

If you explode upward during a squat and even jump from the ground, you are performing a jump squat. This is a great neurological movement - it will improve explosive and overall strength.

It forces the muscle fibers to fire in unison, and improves the efficiency by which your central nervous system uses your leg muscles. This is a great movement for people in explosive sports like basketball or track.

After about 5 more reps like this, take two breaths between reps, etc. It is important not to perform breathing squats with a light weight - these are only to be employed when required to obtain extra repetitions. If you use this technique without sufficient weight, you can actually hyperventilate and become dizzy or pass out!

While there are many, many more variations of the squat, the last squat that I would like to mention is the "King squat" or one-legged squat. Ian King takes credit for this movement. Take a natural stance. Now, take one leg and extend it out so it is as close to parallel with the ground as your flexibility and strength permit. If possible, grab your toe with your same-side arm (you may not be flexible enough to do this).

Eventually, try to perform this movement "free standing" but to start, take the opposite arm and grasp a frame or pole to balance yourself. Now, using the leg planted on the ground, lower yourself as far as you can go without your raised leg touching the ground or losing balance. This is the one legged squat and is a great exercise to address weak-side issues (work the weak side first and don't exceed weak-side reps with the strong side) and also to improve flexibility and overall leg strength.

The squat should be a staple of leg training, but there are plenty of varieties to keep training challenging and interesting. This movement places so much stress on the body and works so many muscles at once that it has been shown to affect your hormones! Many people report growth in all areas of their body - including their arms - simply by performing heavy squats. The squat is not only a strength and hypertrophy (muscle growth) exercise, but can provide a great cardiovascular workout as well. The squat will be a key tool in your quest for your peak physique!

Be sure to also check out:
Ten Fat Mistakes!

August of 1999 Jeremy weighed in at 245lbs. Today, he is down to a ripped 180lbs. Learn how to lose weight from someone that has done it before and continues to help others do the same!