Justin is now 1 week out from the New England Bodybuilding and Fitness Competition. This last week is the final stage in his contest prep. Read on below to see how the last week and competition day finish out.

Justin is currently at the one week out mark from the New England Bodybuilding Competition and there is not much left to improve upon in this final week before the show. All the work that got him to this point was accomplished in the previous 9 weeks of his contest preparation.

This last week is the final stage in his contest prep where he will be depleting his body Monday through Friday, and then he will be carb loading the night before the contest. This method of carbohydrate loading is much different from the normal three days deplete - three days load method and I will be discussing how it is going to work in detail further into the journal.

Body Fat: Justin's body fat at this point is extremely low. We do not keep track of body fat percentage at all through out the course of his contest preparation, instead we look for key areas on his physique that will indicate if his condition is where it needs to be or if he still needs to tighten up certain areas more. These areas are his gluteus, lower back, and his face. If all these areas are very tight and striated then he is where he needs to be, and they are.

We will accomplish this by cutting out a small portion of his carbohydrates on Monday, Tuesday, and Wednesday, so that he can still perform his final depletion workouts. Then on Thursday, Friday, and Saturday, we will drop his carbohydrates extremely low so that he will be very depleted going into his carbohydrate load on Saturday night. This will also be further explained in the journal.

Justin's protein intake will still remain as high as it was in the previous weeks leading up to the contest. Since we will be bringing his carbohydrates very low over the course of the week we will need to keep his protein high to compensate for the lack of carbohydrates.

Over the course of this week we will also be incorporating higher fat protein sources into his diet to give him some energy due to the low carbohydrate intake. To do this we will be adding some more steak and salmon into his diet on top of the natural peanut butter and EFA's that he was already taking.

Now on to the training journal...

Today was an off day from training, and since this is the final week going into the contest Justin's training will be altered to properly deplete his body for his carbohydrate load. Since he is not performing any weight training or cardiovascular work today his carbohydrates will be dropped from his usual intake of 300g down to 200g. So his diet for the day will look like this.

Justin's meal schedule is still the same as it was from 10 weeks out. The only change to his diet is that he is only having carbohydrates at 3 of his 6 meals. He is also including more red meats and fish into his diet for a higher fat intake. His protein and fat intake is evenly divided over the course of his 6 daily meals.

Today Justin will be starting the first workout of his three depletion workouts. The first workout will consist of chest, shoulders, triceps, and abs. These workouts will be performed with moderate weights for sets of 12-15 reps and none of the sets will be taken to failure. His diet for today will be the same as yesterdays. 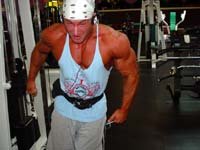 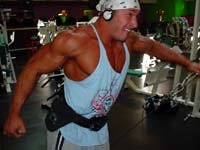 Today's workout went very good. There is not much to comment on due to the fact that it was a depletion workout and the goal for the workout was to simply exhaust the targeted muscles.

Justin was looking very hard and tight during this workout (as you can see from the pictures) and everything is right on track for next weekend.

Today's diet was very similar to yesterday and will probably not be altered until Thursday by the way things are looking. Today was a day off from weight training and cardio, so there is not much to say. Justin's diet looked like this.

Today's diet is the same as yesterday's, but tomorrow there will be a slight reduction in carbohydrates, and an increase in water intake. From now on Justin will be drinking 2 or more gallons. Justin performed his second depletion workout for the week by training back, biceps, and abs. The sets were very light through out the workout and the reps were around the 12-15 range. The diet for today looked like this.

- This workout went pretty good. There is not much to report about the workout, it was just a light weight/high rep depletion workout. Justin is starting to really dry out on the lower carbohydrates, and I am excited to see how everything turns out this weekend.

Today Justin will be dropping his carbohydrates by 50g down to 150g for the day. He will do this for the next two days going down to 50g on Saturday before he starts to carbohydrate load on Saturday night. Today is an off day from training and cardio, so his diet for the day looks like this.

Today will be the last day that Justin will be training before the show. Just like yesterday his carbohydrates will be dropped by 50g down to 100g. For the last depletion workout Justin will be doing one or two exercises for each upper body part. Today's diet looks like this.

- For the third depletion workout Justin just picked 1-2 exercises for each body part and went through chest, back, shoulders, triceps, biceps, abs. The weights were very light and the pace was fast in order to burn up the last of his glycogen stores for tomorrow.

Today Justin will only be eating carbohydrates in his first meal of the day with each meal after consisting of a protein source and a vegetable. Through out the day up until 4 P.M. Justin will be drinking a minimum of a gallon of water until he cuts it out. After that he will only consume water if he isn't filling out fast enough. So up until 4 P.M. Justin's diet will look like this.

- Four meals consisting of 60g of protein and a small amount of healthy fats with 50g of carbohydrates in the first meal of the day.

From 4 P.M. until 8 P.M. Justin will not be drinking water and the only food he will be eating will be a small amount of lean protein. At 8 P.M. Justin will be starting his shit load, which will consist of all junk food, anything with fat, sugar, and sodium will fit the bill, the only catch is that he will not be drinking any water what so ever. So, imagine trying to eat foods like pizza, Wendy's, donuts, muffins, banana bread, with out any water, needless to say it becomes a challenge.

Every two hours consistently through out the night Justin will be consuming a meal consisting of all junk food. So, a sample meal might look like this, 2 slices of pizza, two mini coffee cakes, a few cookies, and some sour gummy worms. It doesn't sound right but it works. If you're in peeled contest condition you can pull off a shit load and look awesome the morning of the show. In order to do this right you must be able to properly assess your conditioning over the night and be able to make alterations where needed.

Through out the night Justin continued to eat every two hours into the morning and when he woke up Sunday morning he looked awesome! He was hard, dry, striated, and vascular from head to toe. Things were looking pretty good for today, now its time to get everything together and go to weigh ins. Justin weighed in at 192lbs and would be going toe to toe with the other 17 light heavyweights.

After Justin turned in his music and got his number we took off to get some breakfast. Justin had another meal that consisted of breakfast pastries, and other sweets and he was allowed to have a small amount of water.

Backstage Justin continued to snack on junk foods and candies before going onto the stage for the Pre-judging round. Justin was called out with the top 5 guys and held his own against all of them. On stage Justin looked very good compared to the other competitors and was the most conditioned guy at the show. When the Pre-judging round was all said and done it was assumed that Justin would get a top three spot, we just didn't know where.

Between the Pre-judging and the night show we decided to go to the Hard Rock café to get a good meal. Justin ate a huge cheeseburger with fries, and a small soda. After that it was back to the venue for the night show. 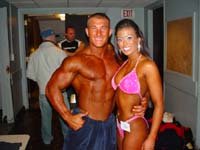 The night show went pretty fast and Justin put on a very solid routine compared to the other competitors in his class. He then got called back out with the top 5 to determine his placing in the show.

Justin was called out in third place behind Brian Walsh, and first place winner Brian Saltzman. Justin was fairly happy with his placing, but we were hopping for a first place finish.

All in all Justin was placed third out of 18 guys in his class, which was a major improvement upon his sixth place finish last year. He was not put in the spot we had hopped for and missed qualifying for the Junior Nationals by one spot.

This will be the final installment of Justin's pre-contest journal, and hopefully there will be another one in store for the future. If there are any questions or comments about Justin's preparation please feel free to e-mail me at Kas1n0l3i30y@aol.com.