Justin is now 3 weeks out from the New England Bodybuilding and Fitness Competition. As I said in the last journal, Justin's pre-contest journal will now be updated on a weekly basis. Keep following Justin to see how he progresses.

Justin is now 3 weeks out from the New England Bodybuilding and Fitness Competition. As I said in the last journal, Justin's pre-contest journal will now be updated on a weekly basis, as his prep will begin to change more often. From 4 weeks out to 3 weeks out we have made some slight alterations to Justin's diet and supplement schedule. His overall look has improved since last week's journal, and he hasn't lost any muscle fullness or size during this time.

Body Fat: At this point in Justin's prep his body fat has become extremely low, and his face continues to get more drawn in over the past few weeks. From his assessment photos you can see that Justin still has a thin layer of fat covering his back, and his legs (these two places come in last when Justin is dieting) that will harden up from the increased cardio in the next few weeks.

Like I said in the first journal entry, we do not do body fat measurements (they are irrelevant on stage), we simply assess his condition using weekly photos, and mandatory posing sessions, which have also become more regular over the past few weeks.

From week 4 to week 3 Justin has used the same carbohydrate cycling strategy that he began using at 6 weeks out, but he has dropped his carbohydrate intake at each meal slightly (refer to the 6 weeks out journal to get a detailed outline of his weekly cycle). The slight reduction in carbohydrates was just what he needed to continue to progress in his prep. 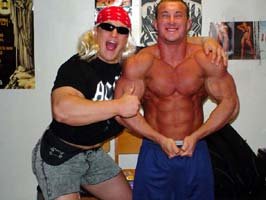 Click To Enlarge.
We are also continuing to shit load on Saturdays and this weekend's load has worked very well without using any drastic depletion workout or any water restriction, so when we do deplete the week before the show and manipulate water intake the results are going to be awesome. Like I said in the previous journal, the shit load method is definitely not for everybody, and most bodybuilders would benefit by just increasing their clean carbohydrate intake for that one day a week.

Throughout the week Justin's protein has still been kept fairly high, around 350g or more every day except on Saturday when it gets reduced a bit due to the high amount of carbohydrates. Since this cycle has continued to work so well, Justin's diet will most likely remain the same until the final week before the show.

The food sources still remain the same in this phase of the diet except Justin's red meat intake gets reduced to only 1 day a week. During this time he also starts supplementing with more omega 3, 6, and 9 fatty acids on his low carbohydrate days, either in pill form, or from whole foods like salmon.

Cardio has remained the same since last week continue to harden up his back and lower body. To do this Justin has been using the rower cardio machine for around 10 min. and then hopping on the elliptical or bike for another 10 min. This change has been working extremely well and we will most likely add another session at 2 weeks out depending on how he looks this weekend.

You can refer to the section above detailing his carbohydrate-cycling strategy for this week of his diet. His meals are still split up evenly over the day with a high amount of carbohydrates coming from his morning meal, and his post workout meal. His protein and fat intake is split evenly over the course of his six daily meals.

* BCAA powder was added to Justin's supplement schedule this week, on top of the changes that were made last week.

* When it says 12 plates that is the total amount of 45lbs plates on the machine.

The dashes between the reps and the weight means that a triple drop set was performed for this set. 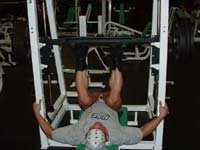 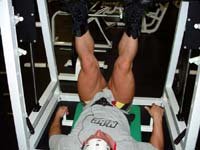 Click To Enlarge.
This was probably one of the hardest leg workouts over the last 10 weeks, and I have some very nice pictures to go with it. The triple drop sets that were performed on the Hack squat and the Leg press were very taxing for all of us, let alone Justin who is 3 weeks out from the competition. Needless to say that this was a very impressive workout and everyone maintained their strength throughout the whole workout.

- Like last week today was a day off from training, but Justin still got in some abs and cardio on the elliptical trainer. His carbohydrates were reduced from yesterday's amounts.

You can refer to the section above on Justin's carbohydrate cycle, and how it breaks down over the course of the day. This is just the macronutrient breakdown for this particular day.

* BCAA powder was added to Justin's supplement program this week.

* BCAA powder was added this week to Justin's supplement program. 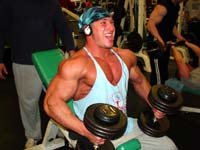 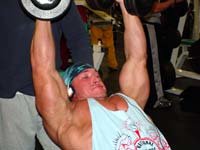 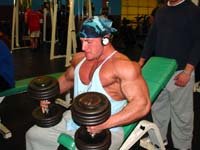 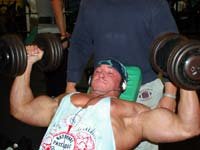 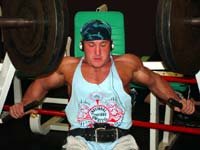 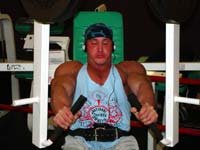 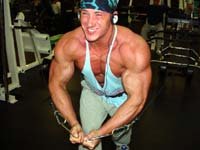 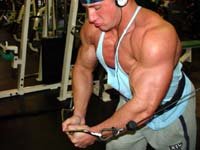 Click To Enlarge.
- Today's workout consisted of chest. As the show closes in, the intensity has been continuing to improve from week to week. We realize that these last few weeks can be the determining factor in Justin's place at the show, so we will be making sure that Justin continues to put forth 110% effort and nothing less.

- Today's training consisted of back and calves. The diet for today was the same as it was yesterday.

* BCAA powder was added this week to Justin's supplement schedule.

Another intense workout for the week. Justin has been training as heavy as possible these last few weeks to make every workout count. At this point there is no room for Justin to slack off, which is why he continues to increase the intensity and give 110% to every workout.

- Today's training consisted of traps and shoulders. Justin's carbohydrate intake was reduced slightly today in order to deplete for his weekend carbohydrate load. So today's diet looked something like this.

You can refer to the diet section in the 6 weeks out journal to see how Justin cycles his carbohydrates over the week.

- Today's workout was another quick and effective shoulder routine. I got some nice training pictures for this workout, and you can see the improvements in his condition over the past few weeks.

Today's diet was the same as yesterday's diet. Today's training consisted of biceps and triceps, and his carbohydrate intake remained low today due to the fact that Justin will be carbohydrate loading tomorrow morning.

* This is the total number of reps performed in both arms.

Click To Enlarge.
- Today was an awesome arm workout, and instead of working triceps first, then biceps, we alternated between one triceps exercise followed by one biceps exercise. The weights used during this workout were very good, and I am very impressed at the fact that Justin has continued to use most of his off season weights during these last few weeks.

Today was a day off from training like usual, and Justin practiced his shit load again through out the day. On this trial he didn't restrict his water at all like last week, and the results of the load were still phenomenal.

I just hope it works as well as we think it will for the show in a few weeks when we employ the depletion workouts and the water manipulation. Justin's diet is never recorded today since you can not really keep track of calories coming from junk foods, but his supplement schedule still remains the same, as it has been on previous off days.

- WORKOUT - OFF DAY (training and cardio)

By dropping Justin's carbohydrates slightly this week and paying attention to his cardiovascular training we were able to drop a few pounds and tighten up his lower back and legs.

In these next two weeks we will make minor alterations to his diet and training since his condition is where it needs to be. At this point in Justin's prep he is ready to go to war, so now we will focus on bringing out as much detail and separation as we can in the following two weeks.

Until then, if there are any questions or comments about Justin's preparation please feel free to e-mail me at Kas1n0l3i30y@aol.com.