Jason Statham has already shot straight to the A list of the Hollywood elite. Crank it up a notch with the following muscle-numbing workout!

He is the latest British export, but has already shot straight to the "A" list of the Hollywood elite. He is a former international diver who placed as high as 12th at the World Championships back in 1992 and was a member of Team Great Britain for 12 years. He is none other than the smooth talking cockney that is Jason Statham.

Known for movies such as Guy Richie's Lock Stock and Two Smoking Barrels, and Snatch, where he co-starred alongside Brad Pitt. He later went on to star in movies like The Italian Job, where he played get away driver, Handsome Rob. These roles catapulted him into the lime light and as a result, landed the lead in The Transporter, where he also played an elite driver, and most recently Death Race, in which case, the title says it all!!!

Since his rise to fame, Statham has had to re-evaluate his whole outlook on health and fitness. In an interview for a men's magazine he was quoted as saying, "I never gave a f%@k about a calorie. An apple? It's good for me. I'd have five. Bananas? Eat the lot."

Although he was keeping active through his roles in the movies and doing some MMA as a hobby, he realized that it was no longer enough and had to do something about it.

His new training regime was an intense 6 days a week, but no workout lasted more than 35 minutes. He still managed to drop almost 20lbs of body fat in a mere 6 weeks, and what better a time than now to do that with his new movie, Crank 2 due for release. But bear in mind that in order to make changes like those in that time frame you must have an immense work ethic and unwavering motivation.

When asked to describe his workout, Statham answered in his cockney accent, "f%&king horrible, f@%king nauseating, f*&king murder, f@&king nightmare, and f%@king priceless." From this, I am getting the ever so slight impression that this workout is a little bit tough. Like any good athlete, Statham brought a certain discipline to his training; his rules were simple:


The workout in and of itself is relatively simple; it consists of a 10 minute total body warm-up on the rowing ergometer, followed by another ten minutes of a medium intensity exercise such as the following:

In this part of the workout Statham will also do "static exercise circuits." This is where you perform an exercise and hold a certain position within that exercise for predetermined period of time. For instance, as you do a squat, you may hold the half squat position, keeping tension on the muscle, and even though they are not moving, contracting in an isometric fashion.

This can also be done for every other exercise. This is then followed by what is called interval training; where there are short bursts of explosive exercise followed by active rest.

For example, while cycling on a stationary bike, sprint on a difficult level setting for 60 seconds and follow it with 2 minutes of active rest—that is, cycle slowly while you get your breath back or walking around. This "active rest" can be pretty much anything so long as you keep the body moving. However, the interval style chosen is based on circuit training and unconventional exercises are used.

From the exercises below, Statham's trainer would choose a combination of 6, set a required rep range for each individual exercise and repeat this cycle 5 times. The time taken to complete all 5 circuits is how the level of intensity is measured. This target time is then used to increase intensity as fitness levels increase.

Use an explosive manner on the concentric part of the exercise. Slowly return on the eccentric portion. Rep range - 20 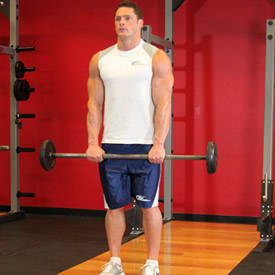 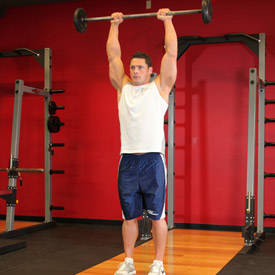 Begin by placing your feet shoulder-width apart, squat down, thrust your legs back, perform a push-up, pull your knees back to your chest, and jump, exploding as high as you can out of the squat position. Rep range - 20 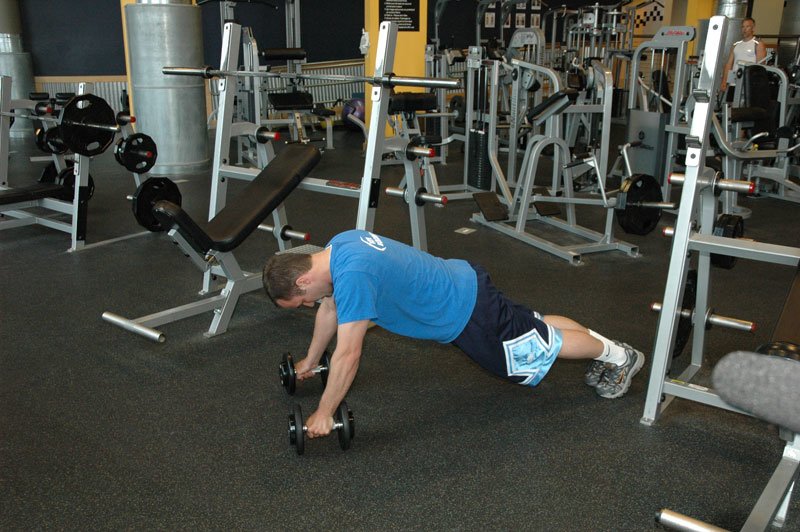 Made famous through its use during the World's strongest man contest; this is a great exercise. Holding a heavy kettle bell or dumbbell in each hand, keeping your arms hanging at your sides, march the length of the gym floor and back again. Rep range - 3 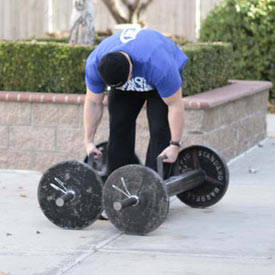 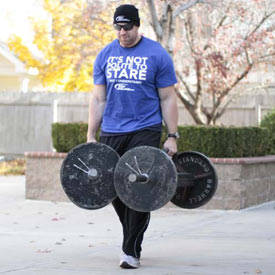 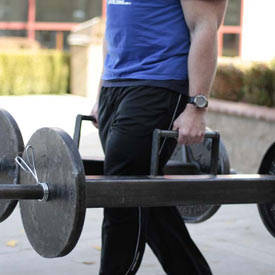 Statham does a type of pull up known as "Dyno Style" pull ups. This is where you perform a pull-up, but in an explosive fashion, jump to another bar above. However, since Statham is a former elite level athlete, normal chins will suffice. Rep range - 8 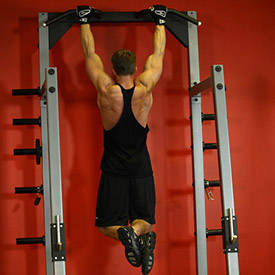 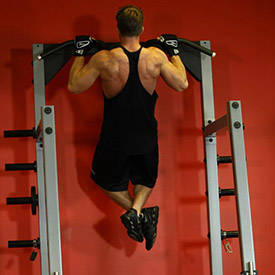 This military exercise is a real killer; here you will walk on all fours the length of the gym floor, and back again. Rep range - 3 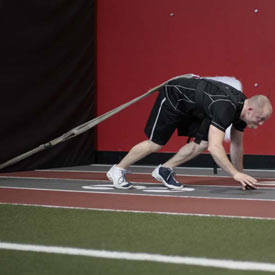 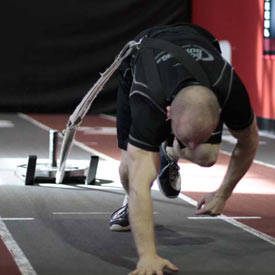 Works the lower lats. Sit at a lat pulldown machine or kneel in front of a cable pulley. Hold lat bar with hands about 8 inches apart. Start with arms extended overhead. Pull bar straight down until it is even with your upper chest. Return slowly to starting position. Do not swing or lean back! Rep range - 5 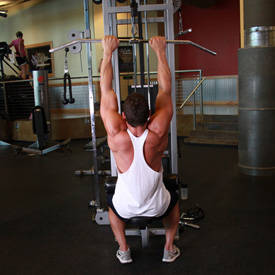 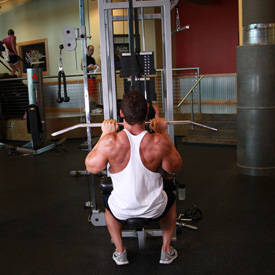 Begin by holding a barbell in front of your shoulders, similar to the beginning phase of a military press, then bend at the hips and knees until your thighs are parallel to the floor. Then push back up. Rep range - 20 Statham can do five at 1.25 times his body weight. 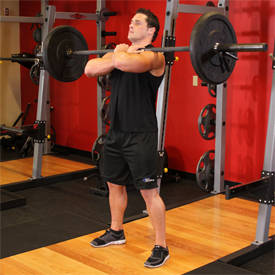 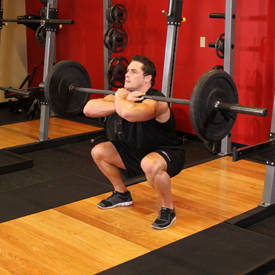 Hanging from a pull-up bar, bend your knees and curl them toward your chest, and then lower them slowly. Rep range - 10 to 20 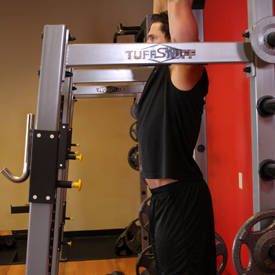 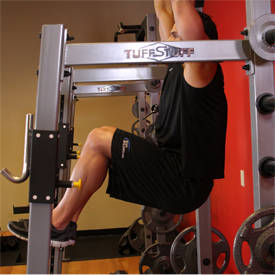 Holding a dumbbell in each hand, (a kettlebell may also be used) step up onto a bench, and then step down, alternating the leg you step up with each time. Rep range - 20 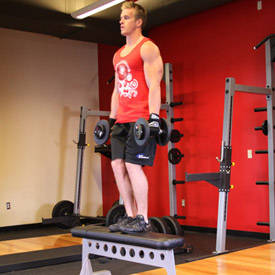 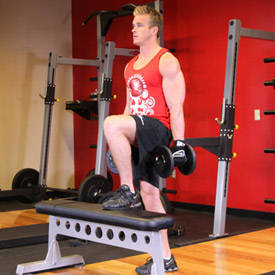 These are a variation of the traditional seated cable row. To perform these, sit at a seated cable row station with you back erect, feet planted firmly against the pads and your knees only slightly bent. Attach a single attachment to the bottom, and grasp it in either hand. Bring the weight in towards that same side, keeping your back straight and your chest out. Rep range - 5 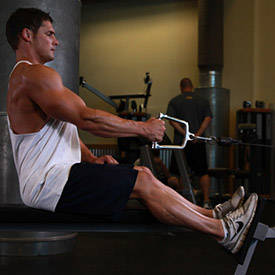 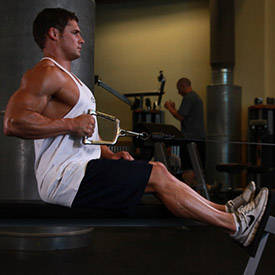 This is where the traditional or conventional exercises are utilized. Compound exercises such as bench presses, squats, or dead-lifts should be performed with about 75 percent of your one-rep max, and never incorporated into a circuit.

Of course, no training regime is of maximal value without adequate nutritional and supplementation support. And for our Crank 2 - High Voltage star is no different. However, he doesn't go for any fancy fad diets; it's a basic, no nonsense approach to healthy eating.

Statham doesn't eat any refined sugars, these are the high GI foods such as candy, honey, etc. He also has a total ban on flour. This means breads and pastas are out; good job he's a Brit and not Italian eh.

Statham also has eliminated fruit juices from his diet, which are high in fructose and some that have added sugar, and he has knocked the "ole booze" on the head. This, for a Brit, must be tough because those guys are far worse than us Irish, and that's a fact!!

Now saying that, this doesn't mean that just because you eat well that you have to be a boring old fart, you too can be cool like Jason Statham. He eats his dessert every night; he downs a bowl of mixed fruit smothered with plain yogurt. So you guys with the sweet tooth can have your cravings satisfied.

He does admit that there is a way to keep yourself on the straight and narrow, and that is to record everything that passes those lips. He carries around a notepad and writes down everything that he eats, and I mean EVERYTHING, down to every sip of water. Statham drinks up to 1 1/2 gallons of water everyday.

Not only does this keep him hydrated throughout his hectic schedule, but also helps to keep that feeling of being full. After all, he religiously sticks to a diet of a maximum of 2000 calories. He divides this 2000 calorie limit into 6 small meals, which he eats in regular intervals throughout the day. He will also supplement his diet with some protein shakes post workout.

So there you have it people, the complete guide to the Jason Statham fitness routine. Try it out for yourselves and see if you can "crank" up your training and "transport" your body fat into oblivion.