The pectoralis major is without question one of the most frequently trained muscles in fitness and sport. Despite it's popularity, few people know much about the anatomy and kinesiology of this important muscle. Learn it here!

The pectoralis major is without question one of the most frequently trained muscles in fitness and sport. Despite it's popularity, few people know much about the anatomy and kinesiology of this important muscle. Knowing this information will make your training more effective for you and your clients while minimizing the risk of developing muscle imbalances in the shoulder area. Let's take a closer look at what you need to know to train this muscle safely and effectively. 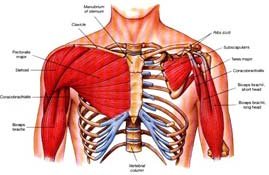 The result of this unique shape and varying fiber angles of the pectoralis major is the superior and inferior portions of the muscle have somewhat different actions on the arm. Hence, certain exercises involve the upper "head" of this muscle more than the lower and vice versa (1,2). This has significance in your training because you can select exercises that will train the portion of the pectoralis major, specific to your goals. This can be more effective than a general training approach of exercising the whole muscle as one unit.

The pectoralis major has a tremendous capacity for development in both strength and size. The reason for this lies in the fact that humans have evolved to walk on two legs. When we were quadripeds (if you believe in evolution), the pectoralis major played a significant role in our everyday lives of walking with our arms and legs.

Nowadays, the muscle gets much less opportunity to contribute to our daily activities, and thus lies in a state of atrophy in your average person. For this reason, detrained people who begin a strength training program incorporating the pectoralis major have a lot of genetic room to work with and typically show great improvement in this muscle in a short time period.

A general approach to training the entire pectoralis major is the best choice for beginners, general fitness enthusiasts, and athletes looking for general improvements in strength of the arms. If this is you, the flat bench press is a great way to go. The only limitation to this exercise is that it does not allow a full range of motion in the upper portion of the movement.

If you are interested in developing the lower portion of the pectoralis major for aesthetic reasons or a need for improved strength in arm extension (lowering the arm from in front of the body) or adduction (pulling the arm towards the body from an out-to-the-side position) performing the general pectoralis major exercises discussed above on a decline bench is a effective way to train.

It is important when training any muscle to be sure to train that muscle's antagonist(s). Failing to do this will likely result in muscular imbalance, which will alter the mechanics of the joint involved. Muscle imbalances resulting form a strong pectoralis major and weak rear deltoid/rhomboids are very common. To avoid this condition in the shoulder area, incorporate just as much time training with reverse flies, seated rows, T-bar rows and other mid back/ rear deltoid exercises as you do training the pectoralis major to maintain agonist/ antagonist balance.

As you can see, there is a lot to know to safely and effectively train the pectoralis major. To be an effective trainer, you need to be able to match you and your client's goals with the best and most specific training program while avoiding the possible effects of negligence. The more you know, the faster and more frequently you will obtain the proper results. Look for similar articles on training other muscle groups in the future! Contact me with any suggestions at parsons@issaonline.com.