The most complete forearm building article ever. You will build huge lower arms quickly!

This should be a short article. I wasn't even going to include it in this short version of the system. I think the majority of people really don't spend much time training the lower arms. They get a lot of work without spending extra time on it. But since there are people who have to train their forearms, someone pointed out to me that if I wanted to keep the short version complete, I needed to include it.

Maybe he was right. After all, strong forearms may not be your first concern but they have their benefit. When flexing your arms in biceps and triceps poses the forearms complete the picture. Strong forearms show people you are serious. Nothing forces someone to give you respect as a firm grip when shaking hands.

It screams: Don't mess with me! And you have to admit that the striations in the forearm look pretty cool no matter what. And since you can show them off all the time, it may give you some motivation. 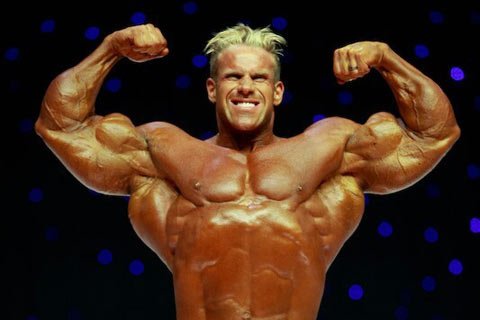 Click To Enlarge.
When Flexing Your Arms In Biceps Poses
The Forearms Complete The Picture.

You can get at the forearms with every exercise you can think of, it's their use in lifts that target the other muscles that gives them their completion. Preacher curls, chins, dips and deadlifts all get more out of the forearms than does actual forearm training. So be sure to include some lifts that take a lot out of them in your other workouts. That's why a lot of people don't really train the forearms.

Turning the wrists, pushing them up in a point of contraction, just hanging down when doing chins, all these things are ways of increasing the forearm involvement in training other muscles and should take priority over other things. There is virtually nothing, short of sleeping, that doesn't target the forearms.

The forearms can be trained up to two or three times a week if you choose. But unlike common belief dictates this is not necessary. Some of the fiber is used a lot, true, but not to such an extent as say the calves. Lots of people think that because they are similar muscles, and the likeness (lower legs, lower arms) that forearms need to be trained more often, just like the calves. This simply isn't true.

For starters they aren't used nearly half as much. They get a lot of work, but a lot lighter as well. The functioning isn't the same either. There is no rotator joint in the wrist either. But we'll get to that when we discuss the physiology.

What you do need to do is train with high reps. Get the weight you can handle and do 20-30 reps a pop. You only need one real weighted work-out, but try to give your forearms more action the rest of the time. Not just in your other workouts, but in every day life. Things that move the wrist, and there's lot of them, should be a conscious thing. That's how you develop forearms that stand out.

Physiology Of The Muscle

The main muscles in the lower arms are the two counteracting muscle-groups, the forearm flexors and extensors. Next to that there is also the coracobrachialis that ties in to the biceps and a whole host of other little muscles. Instead of playing four separate sections against each other to move a rotator joint, like the calves, the muscles are attached to two bones in the forearm. That's right, two bones. The bones of the hand are attached rather loosely.

By extending one of the bones and retracting the other you can put the thumb forward or the pinky forward. The flexors and extensors can make the fingers go down and up. So the wrist can rotate as well, albeit in a different way than the calves. That's why you need to train the muscles in different ways. Up and down, as opposed to back and forth.

The structure of forearm musculature is immenently complex. You can sum up a biceps in three distinct muscle groups with distinct functioning and distinct training. This is not so for the forearms that consist of a whole host of hard to define muscles that have strongly overlapping functions in the control of the hand and forearm. The flexor carpi radialis, the brachioradialis, the flexor carpi ulnaris, the extensor pollicus brevus (short wrist extensor) , the extensor pollicus longus (long wrist exentsor), extensor carpi ulnaris, pronator teres and the palmaris longus are the full extent of the forearm muscles. But strangely enough all these muscles serve only to move the hand.

Unlike the physiology suggests, training a forearm directly is infinitely simple. The wrist can flex, extend and suppinate. In short that means you can make the palm of your hand towards the elbow, or away from the elbow. This is the bulk of forearm mass and the main thing you need to concern yourself with. To train them you can use a cable with a handle or a bar, a barbell, an Olympic bar, and EZ-curl bar or a dumbbell. But the exercises are the same.

There is the wrist curl and the reverse wrist curl. To do a wrist curl rest the upper side of the forearm on your leg or on a bench or something of the sort, with your hand hanging off the side holding one of the weights suggested above. Let your hand hang down, with the weight supported in your fingers. Now curl the hand up, let the weight roll in the palm of your hand and get it as far up as you can. Hold for a count then lower slowly and repeat.

To do a reverse wrist curl rest the bottom of the forearm on your leg or a bench. So the back of your hands is facing up. Again let the hand hang down off the edge with the weight supported on the fingers. Pull the fingers closer so your get a grip around the weight as you aim to get the back of your hands as far back toward the elbow as possible. Hold for a count, lower slowly and then repeat. The latter is harder than the first exercise. But this is the meat and potatoes of forearm training.

Grip strength, the power to curl your fingers, is another aspect of forearm training that may be more functional than aesthetic in training. Grip strength improves exercises like deadlifts and chins and several curling motions, which may in turn provide better returns in the target muscles of those exercises. Partially of course you should train them by actually doing those exercises. A popular way to improve grip strength is by using one of those spring-based grippers they sell at any novelty store. They work great, But you tire of them so easily.

Sometimes I use those large clamps for Olympic bars to simulate the movement. They are very resilient and do a great job, plus they save you the money on grippers. The other way I train for grip strength is behind-the-back wrist curls. Using a smith machine is handy in this, but if you can pick a barbell up behind you back that is fine too.

So with hands behind the back palms facing backward, support the barbell in your fingertips and simply curl the bar up until you have a strong grip of it and repeat this motion. You will find grip strength Improves drastically as weight increases. I do this exercise twice a week regardless, eventhough I rarely train forearms separately.

The last part in forearm strength and in my opinion the most useless since it doesn't really add to either strength or size, is the rotation of the wrist. When training this correctly it can prevent injury in the forearm, if trained incorrectly it can cause injury in the forearm. The exercise I'm referring to is the tomahawk. Strip one end of a dumbbell of its plates and hold it on that end.

The weights remaining should be on top. You are holding it in a hammer grip as if holding a hammer or an axe. In this case a tomahawk. Now rotate to the left until the bar is parallel to the floor, return to starting position and rotate right until its parallel to the floor. Hold the parallel position a bit longer than a count and move slowly from one end to the other.

Do this for both arms of course. If you feel up to it, try rotating it forward. The strain is incredible, so be careful.

A wrist-curler is a home-made device that consists of the bar from a dumbbell with all the plates stripped, a rope attached to the middle of it and a heavy plate at the other end of the rope. Grab the bar on both ends and now twist it until you get the rope all the way wrapped around the bar. Then unwind it slowly and repeat on the other side. Keep going back and forth. This is a great overall exercise for the forearms.

There is also a wrist-curler machine. This may be an easier alternative for those of you that have one of these at their gyms. I hate the contraption myself, but that doesn't make it any less useful. It operates on the same principle as the wrist-curler.

There isn't much progression involved in forearm training. You have it or your don't. If you are six months in your regimen of lifting and eating right and see no improvement in forearms, its safe to say you don't have the genetic predisposition to grow them overnight. These are the people that need to train them separately as well, with one or two extra sessions weekly after their arm exercises. Usually these are skinny, tall, stocky people, but not always. And vice versa, some of the skinny tall people may not have the problem, such as myself. That's pretty much all there is to say about progression: If there is none, you may want to consider putting some extra work in.

Before his passing, van Mol was an author, muscle model, editor at Muscle and Sports Science, and quality assurance manager and R&D specialist for Musculi, a Belgian sports supplementation company.