The Science Behind Calf Training!

Calves training is the most misunderstood. Some people claim that you need to hit them every day with high reps while others claim that low rep low volume works best. In my experience I found that an approach of heavy twice a week calf work worked great.

Calves besides being one of the most neglected body parts in the gym are ones whose training is most misunderstood. Some people claim that you need to hit them every day with high reps while others claim that low rep low volume works best. In my experience I found that an approach of heavy twice a week calf work worked great.

Getting Your Calves To Grow...

My typical routine was 10 sets of 10 reps with 800 lbs on the standing calf raise machine and only 20 seconds of rest in between sets. I would also do this routine on a calf press machine or on a hack squat machine. This approach worked great for many years with small variations here and there such as me changing the exercise used or preceding the routine with two sets of 50 reps for the soleous on the seated calf raise machine or tri-setting calf raises with tibia raises and then back to calf raises again. 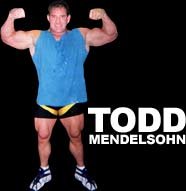 I met Todd at a gym in St Petersburg Florida and the first time I saw him I almost hit the floor. When he walked his Legs looked like those of a cyborg, all striations twitching up and down and the calves I swear looked like they where pure fiber without skin. After Todd finished his workout I introduced myself and asked what he did for calves.

Todd first mentioned that he hits them twice a week and that his first workout of the week is 8 sets of 8 reps on either the calf raise machine or the calf press machine.

Not much different than my routine, I thought to myself. Now the second routine is the one that shocked me. He would choose the calf press, calf raise machine, dumbbells or donkey calf raise machine and do 4 sets of 100.

Todd claimed that this is the method that made his calves grew beyond belief. I tried this out and while at first I had to stop at 50 reps in excruciating pain as the body got used to it on the first couple of weeks, by the third week I finally was able to achieve 100 reps. Three weeks later my calves were bigger creatures.

Now the reason I always trained them with 10 sets of 10 is because I always thought that the calves were comprised of mainly fast twitch fibers (at least the gastroctnemius as I knew that the soleous, which is the part under the gastroc, is mainly slow twitch). I took this question to Todd and he explained that the gastrocnemius is both fast twitch and slow twich contrary to being predominantly one or the other.

Weeks later an article named High vs. Low Reps for Abs and Calves by Dr. J. Clayton Hyght (www.drhyght.com/index2.html) that was published on Lee Labrada's site www.labrada.com) corroborated what Todd mentioned. Dr. Hyght mentioned that "the lateral head of the gastrocnemius is composed of about 51% slow-twitch (Type I) muscle fibers.

That means that the remainder is either fast-twitch (Type IIB) or intermediate (Type IIA). As for the medial gastroc, it's composed of 44% slow-twitch. Thus the remaining 56% are fast or intermediate.

In my opinion, it would be crazy to train the gastrocs with high reps or low reps exclusively. In order to stimulate both the fast and slow-twitch fibers, you must train both with heavy weights and low reps, as well as with light weights and high reps. While you're at it, make sure to hit the intermediate fibers with medium weight and medium reps".

Having said that, the mystery behind calf training is unraveled. Twice a week training alternating high reps and slow reps; at least that is the way that I now do my calf training. Below are 3 weeks worth of workouts that you can start using to get some new growth on the calves:

Well, there you have it. Try these routines for the next three weeks for bigger calves. As always remember that nutrition and recuperation are as important as training and that if those two are not in order you may not get as much benefit out of these routines. Take care and train hard!

Be sure to also check out Hugo's website at:
www.hrfit.net

Eating food will not make you fat; only abusing the quantities of the bad foods will. After listening to that statement, Hugo decided to kick the...