The word cardio for most bodybuilders strikes fear into the heart. Fear not, for cardio could be the key for unlocking potential growth. Learn why...

The word cardio for most bodybuilders strikes fear into the heart. Fear that the mere mention of the word will shrivel up their muscles so quick they will look like a concentration camp victim, or worse yet that sitting on the bike next to guy who reads his paper whilst pedaling with as much enthusiasm as a vegan in a abattoir will some how rub off and thus cause the bodybuilder in question to start chatting on his mobile in between sets of tricep kick-backs with the brightly colored plastic weights that weigh absolutely nothing!

Fear not, for cardio could be the key for unlocking potential growth. Before you dismiss me as an aerobics instructor with spandex wedged up certain areas way too far that's trying to convert you to the dark side and join a funky step class, stop and listen to what I have to say about the benefits of cardio as well as tactics to overcome the negative aspects.

Cardio when done correctly offers a myriad of benefits to the individual seeking mass, for those of you not convinced listen up.

Cardiovascular exercise is probably the quickest and easiest way to increase the number of capillaries (small blood vessels) that network throughout the muscles. These networks of capillaries bring various nutrients and hormones to the muscle. Therefore the more capillaries (described as a muscles capillary density) the more nutrients that can be brought to a recovering muscle.

Considering that muscles are living tissues that require a certain level of nutrients, substrates and hormones to survive it seems feasible that a reduced ability to provide these substances will limit the growth potential and an ability to provide more will create an environment were all the building blocks are abundant and available.

Considering that your muscles grow during periods of rest and recovery then you want to be able to provide the said mentioned nutrients and substrates during this period. However at rest only a small number of your capillaries are open and usually only a small amount of your total blood volume is in the ones that are open.

As such it makes sense the more capillaries you have in total the greater number could be open if the percentage that are open during rest stays the same.

Secondly the key to active recovery is to open these closed capillaries whilst preventing any more muscle damage during the recovery phase. Cardio does just that if done at light to moderate intensities, allowing cardio vascular activities to be classed as active recovery.

Many say why bother when resistance training also increases insulin sensitivity, well cardio does it through another pathway. Basically insulin works through receptors called GLUT receptors in drawing in glucose from the plasma to the muscle and there happens to be various forms of GLUT receptors.

Cardio training tends to improve a different GLUT receptor than resistance training (GLUT 4/insulin stimulated as opposed to GLUT 1/non insulin stimulated), so the combination of cardio and weights will provide an optimal level of insulin sensitivity.

Obviously increased mechanical workload will result in greater stimulus for growth as a greater number of fibres will be called into action and exhausted during the extra reps performed due to the increased cardiovascular capacity.

The common form of overtraining associated with weight trainers is parasympathetic. This is characterized with too much high intensity anaerobic training (i.e. weight training) without a sufficient aerobic base to work off. Therefore a good cardiovascular system and training protocol should help avoid overtraining when implemented correctly. 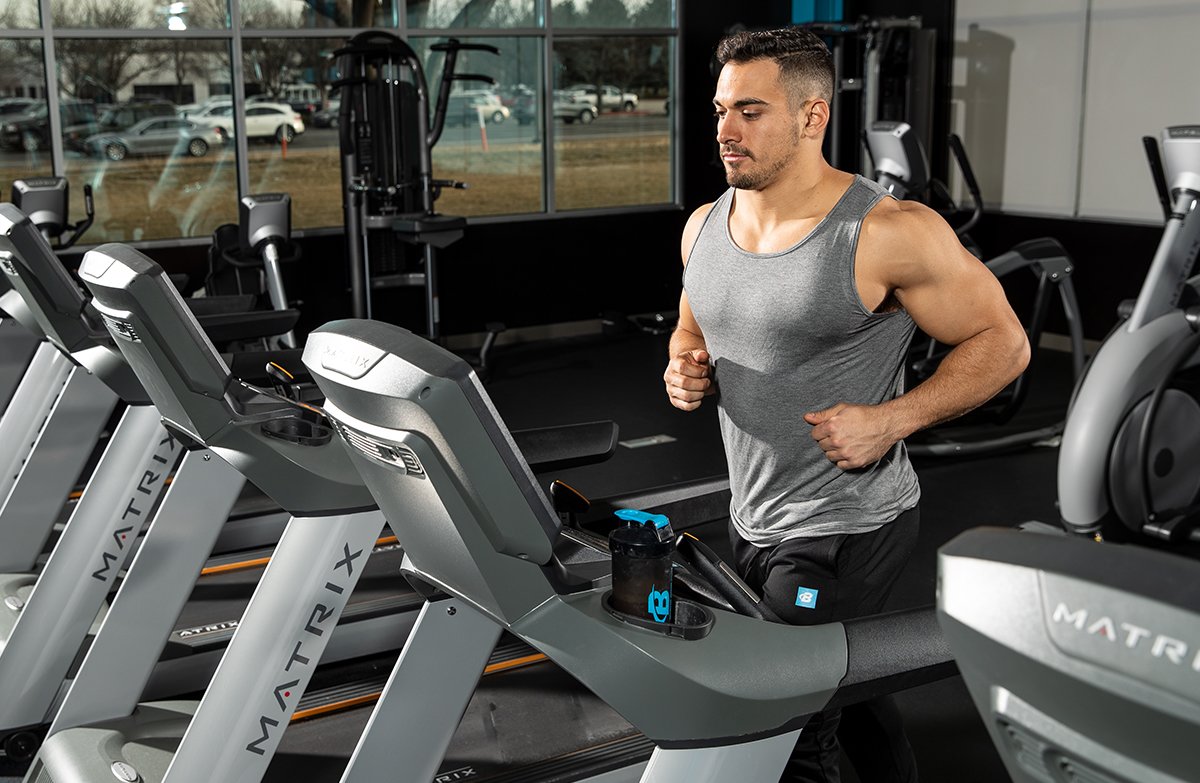 It has been shown that the body adapts to different stimulus in different ways. With Excessive Aerobic training protocols the body will try its best to make the muscle as efficient as possible to oxidize fat and produce as much energy as possible aerobically.

One means to this is fibre type conversion with the fast twitch type IIb fibres becoming type IIa and possibly over a long term basis becoming slow twitch type I.

Considering that fast twitch fibres have the greatest potential for growth, you want minimal conversion when trying to gain mass. Fortunately it requires a fair degree of Aerobic training to produce these metabolic alterations in fibre type.

The increased workload of performing resistance training and cardiovascular training will mean an ever increasing burden upon the endocrine system and your bodies' systemic ability to recover. Sympathetic overtraining as seen commonly in endurance athletes is an ever present threat when increasing weekly workloads of total exercise volume.

Constant monitoring of moods, eating and sleep patterns are vital for ensuring you alter the overall volume of your training according to how your body responds.

As you increase aerobic activity you will increase the number of calories you burn, pretty simple stuff. Considering that you wish to gain weight through increased muscle mass you will need increased calorie levels to provide a surplus of energy and nutrients for growth.

Extra cardio will result in even more calories needing to be consumed to create a surplus, this for a lot of hardgainers becomes a problem as overall calorie intake is usually the culprit of their lack of progress.

This is not a problem if you take this into consideration when calculating caloric needs, and the offset in nutrient partioning will mean that the any excess energy is more likely to be stored as glycogen or used to create more lean tissue rather than be stored as fat.

To avoid the negative aspects of cardio but reap the benefits, try to start a mass gaining phase performing cardio on most days at a light intensity (60% of maximal heart rate) for between twenty to thirty minutes. All ways perform these sessions after or separate from your weights sessions to avoid acute detrimental effects on your resistance training.

The Karvonnen formula is more advanced since it also takes into account your resting heart rate. This is your heart rate at complete rest. To determine this, take your pulse for 60 seconds just before you get out of bed... or take it for 30 seconds and multiply by 2.

As you get deeper into the mass gaining cycle start to slowly decrease the number of sessions you perform. This will allow you to build a good solid base on your aerobic capacity and gain all the structural changes such as capallirisation associated with it which will benefit you deeper into the gaining cycle but will not distract the growth seen in later stages from the negative aspects of cardio as the number of sessions will drop.

The mode of your cardio is vital for capillarisation throughout the entire body. Training tends to be fairly specific; if you only perform stationary cycling for your cardio you will only likely see increased structural changes in the legs. Considering this try to ensure your cardiovascular activity is whole body i.e. swimming, rowing, cross country ski machines etc.

To maintain your cardio capacity during long mass gaining cycles start to switch over your light intensity cardio sessions for shorter hard interval style sessions. For every two days of light cardio you drop add a fifteen minute interval session after your weights session. During your interval sessions perform a work to rest ratio of one to three (i.e one minute hard, three minutes light).

Doing light (60% max) during the rest stages and hard (80-90%) max during the work stages. These short high intensity interval sessions will maintain cardiovascular capacity but won't put the same burden on your recovery capacity by asking your body to adapt to two different and opposing stimuli.

There you have it a simple guide to gaining the most from added cardiovascular training and not a funky step class in sight.