How do you turn a classically trained song-and-dance man (and one of the nicest guys in Hollywood) to move like a legitimate contender? That's when you bring in … Sugar Ray Leonard.

The Australian-born leading man takes his act back to the silver screen this October in REAL STEEL, in which he plays a former pro boxer relegated to training robots in the secrets of the sweet science as two-ton mechs have replaced men in the boxing ring. How do you turn a classically trained song-and-dance man (and one of the nicest guys in Hollywood) to move like a legitimate contender? That's when you bring in … Sugar Ray Leonard.

It's midmorning in a Brooklyn restaurant overlooking the East River, and I'm waiting for Hugh Jackman. Leading up to our MF interview, I had read articles, watched interviews, and spoken with former co-stars about the actor-singer-dancer-do-it-all and learned that, in an industry replete with jerks, Jackman gives Tom Hanks a run for his money as Hollywood's most likable leading man. He's never chased starlets or stormed off a set because there were red M&Ms in his trailer's candy bowl.

Instead, he's known for breaking into song and dance on movie sets and planning his workday around his kids. Although Jackman earned a reported $20 million for his next turn as Wolverine, the 43-year-old still drives his son to school every morning. "He's easily the nicest guy in Hollywood," says Shawn Levy, who directed Jackman in DreamWorks' new robo-boxing movie, Real Steel. "And it's not an act. There's no on-off switch. He is an open, gracious, generous human being all the time."

And yet I'm still wary of Mr. Nice Guy. As a cynical native New Yorker, I am convinced that an A-lister like Jackman doesn't ascend to Überfame by being completely and utterly kind. Since we're about to spend the day together, perhaps I'll catch a few seconds of celebrity ego. Jackman shows up to breakfast sporting a fitted gray T-shirt and a 2-day beard.

He immediately displays nonsuperstar characteristics. He is prompt, arrives alone and, perhaps most surprising, does not wield any sort of phone/handheld device. He melts the waitress with his supernova smile. Then, after ordering hot water with lemon, grapefruit juice, and an omelet with "loads of veggies," he starts chatting as if we were old frat brothers.

To be a leading man, you need to bulk up for action roles and lean down for comedies and dramas. Here's how Hugh does both.

When Jackman needs to transform into an adamantium clawed mutant, trainer Don Smith alternates between four weeks of heavy training and a few weeks of higher-volume workouts so Jackman can maximize size gains. The heavy-lifting phase is done with low reps and long rest periods to train his body to recruit a maximal amount of muscle fibers. This in turn improves his performance during the volume phase, when he'll use higher-rep sets and rest less time in between them. He changes exercises slightly between phases-an incline press may go to a flat press, for example.

When Jackman needs to lean out (to be more the Hollywood heartthrob), he'll superset two exercises for the same muscle group and train his whole body in one intense session designed to burn even more calories during his workouts. He adds high-intensity interval training to speed up his fat loss.

From Down Under To On Top Of The World

Since Real Steel centers on boxing - Jackman plays Charlie Kenton, a down-on-his-luck former boxer and deadbeat dad who trains robots to fight - the first topic is sports. Jackman grew up in Sydney, a city of sportsmen. He was swimming before he could walk and banging bodies on the rugby pitch till he bled. "I've always loved to play," he says. "It's the lifestyle I've always known." While he still maintains a variety of outdoor pursuits - kayaking with former Australian Ironman surf champion Guy Leech, swimming with a triathlon group, body surfing and golfing - a superstar can do only so much.

"[Actor and director] Ed Burns told me how he plays tennis all the time," says Jackman. "I'd love to do my cardio on the court instead of on the treadmill, but it's not easy to arrange these days."

What does come easily for Jackman, however, is his ability to converse about all kinds of topics. Concerned with today's sedentary habits of American children, he explains that his two kids, Oscar, 11, and Ava, 6, are "not allowed to watch any screens" during the week. A typical "good day" is lunch with Deborra-Lee Furness, his wife of 15 years, a walk, an hour of singing, and a visit with friends. A mention of his 2008 People magazine "Sexiest Man Alive" crown elicits self-deprecation. "An old friend of mine e-mailed me and said he had cowboy boots sexier than me," he says.

He discusses his extensive charitable projects, inquires sincerely about my career and life and, perhaps most surprisingly, he's not on his iPhone when I return from the bathroom. Instead he's by the front door waiting for me. "Ready, mate?" he asks. "Honestly," I say, careful not to fall for that g'day chumminess. "When was the last time someone called you an asshole?" He bellows a deep and genuine laugh. "I don't really know," he says. "I'm a bit of a people pleaser, unfortunately. My wife says it's hard to be married to me. She wishes I were more of an asshole."

Stepping Into The Ring 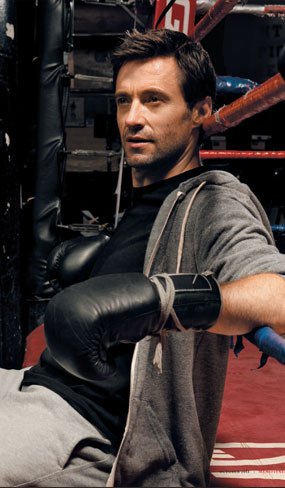 Two dozen of the gym's current fighters, entrenched in their daily regimen, barely bat an eye. Jackman needs no sycophants, however. He immediately introduces himself to the gym owner, a few trainers and the photo crew. Smiles and handshakes. A pat on the back here and there. Nothing phony, nothing forced. A small truth about photo shoots: They are boring. Usually long. Tedious. So I know this is my opportunity. After half a day of standing, posing and smiling, Jackman will inevitably reveal a bit of Tinseltown 'tude. Sure, he's won an Emmy and a Tony, but no one's that good an actor. Yet what do I discover? Nothing. Every few minutes Jackman pauses and checks the images as they roll up on the computer monitor - not because he's controlling, but simply because he's a consummate professional and wants to get it right.

Between shots Jackman changes shirts and reveals what Piper Perabo, his co-star in The Prestige, refers to as "that Wolverine body." It's obvious that he applies the same professionalism in the gym as he does at photo shoots. "I've been working with Hugh for three years," says Don Scott, a fitness trainer with Jim Karas Personal Training in New York. "He's one of the most focused clients I've ever known. People might think commitment is a given for a guy like him. I've trained other celebs. It isn't." Since he first flashed his adamantium claws in 2000, stories have abounded about Jackman's intensity. Squatting vomit-inducing loads of iron. Waking up in the middle of the night to down protein shakes. Working out for hours at the gym before a 14-hour day on the set. Practicing a year of daily yoga for his role in 2006's The Fountain.

"My latest trick is wearing a heart monitor when I'm lifting," explains Jackman. "I never let the rate dip below 140. It's full-on." Even more impressive? Jackman's ability to radically alter his body for different roles. "He's constantly bulking up, then stripping down," says Scott. "It's not easy to do in a quick time frame, but Hugh' is highly responsive to exercise." That means packing on 20 pounds of muscle for X Men Origins: Wolverine, then shedding it with speed and agility drills to host the 2009 Oscars, then adding 30 pounds for Real Steel reshoots. 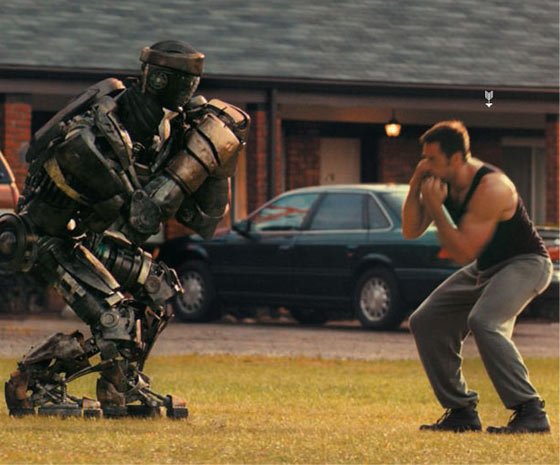 In his latest role as a former fighter, Jackman had to find a happy medium: bulky and strong, yet not as shredded as his action hero alter ego. "Over the past three or four years it's gotten a lot tougher," he says. "I have to eat a stricter diet. I have to train even harder. I can't get away with what I used to." Yet as he details his training practices, he never sounds pompous or self-aggrandizing. Instead he has the photoshoot stylists in stitches doing his dead-on Ah-nuld impression ("No, no, Hugh, you're supposed to lift until you feel like puking and then start your 10 reps," he says in his best Austrian accent). But maybe the biggest shocker about Jackman's ripped 6-foot-3, 195-pound physique? "I don't really enjoy training," he admits. "People say it's addictive, but I'm like, 'not so much.'"

The Impetus To Grow

Far more a "wakeup-and-swim-in-the-ocean guy" than a gym rat, Jackman says that his roles are the only impetus keeping him pumping iron. "If I weren't getting paid or didn't have a character like Wolverine to maintain, I would just be a tall, lean, fit guy." At 2 p.m. sharp, while Jackman grins for his thousandth photo, boxing icon Sugar Ray Leonard strolls into Gleason's. Bags no longer crack. Trainers no longer bark. Fighters freeze in their tracks. Everyone immediately recognizes the legendary fighter because Leonard, at 160 pounds, weighs the exact same amount he did in 1987 when he defeated Marvin Hagler for the WBC middleweight title. "Yo!" says a boxer from one of the rings. "He's going over there with Wolverine!" Jackman and Leonard greet each other warmly.

Although Jackman has tried a plethora of sports, he never boxed. Growing up, the closest he'd come to slipping between the ropes was via his father, a British Army boxing champion. "When he went to the Golden Gloves, he got KO'd in his first fight," says Jackman. "After that he was smart enough to find a new profession." The Aussie star spent a year prepping for his Real Steel role. In addition to skipping rope and hitting the pads with former middleweight contender Michael Olajide Jr., the studio hired Leonard to ensure that Jackman's character looked and moved more like a veteran of the ring. "I had to make certain he executed punches properly," says Leonard. "Because fans would know right away if it didn't look right." 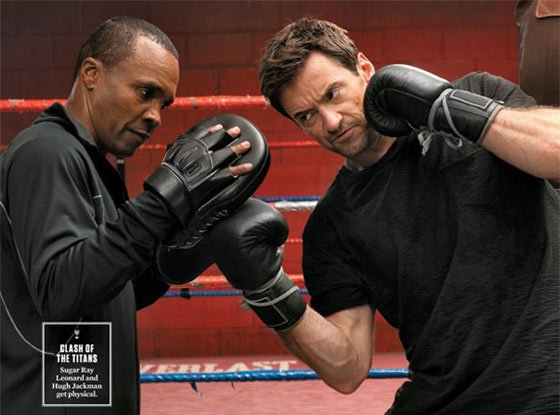 Leonard's most valuable insight, however, had more to do with Jackman's head than his hands. Leonard spoke to Jackman about the loneliness of the sport. How obsessive fighters can become. Leonard talked about his trainer, Angelo Dundee, stressing the importance of the trainer-fighter relationship. "Ray also explained that it's all about the eyes," says Jackman. "The intensity that a fighter possesses. He taught me how to express that without words."

The photo shoot continues. Leonard joins Jackman for some takes. Then the two get physical. Jackman pounds the heavy bag while Leonard holds it. Jackman throws combinations as the boxing legend wields the mitts. Instruction has clearly paid off. For a big man, the Aussie's feet glide gracefully across the canvas. Jackman fires off a 4-punch combo - sharp, accurate, powerful. "Got it," says the photographer. Jackman laughs as sweat drips down his forehead. The shoot's heading into its fifth hour, and Jackman's still smiling.

At 5 p.m., the shoot wraps. While Leonard doles out pointers to awestruck fighters, Jackman changes into street clothes. Then he eats a small portion of grilled chicken and veggies, his third such plate of the afternoon. When he finishes, he does not, as I expect, bolt for the exit. Instead, he makes his way around the gym thanking all of the folks for their efforts. It's at this moment that my New York cynicism disappears. When he sidles up to me, flashes that megawatt smile, and asks, "That wasn't so bad, eh?" a truth hits me like a right cross. Tom Hanks, you're toast. Hugh Jackman really is the nicest guy in Hollywood.