Get A Grip: The Importance Of Forearm Strength

Powerlifters have always known they could never hope to pull a heavy bar off the floor without a vise-grip. Strongman competitors know their success in many events hinges on grip strength. MMA fighters, wrestlers, and grapplers also need to sustain a strong grip in order to maintain control over their opponents. Other than the aforementioned groups, few guys do any direct forearm work. If they do, it's thrown in as an afterthought at the end of a workout.

Unless you're genetically gifted with thick forearms, they can be resistant to growth, much like calves, but a few small tweaks to your existing gym program may be all it takes to start getting mistaken for Popeye on the street. 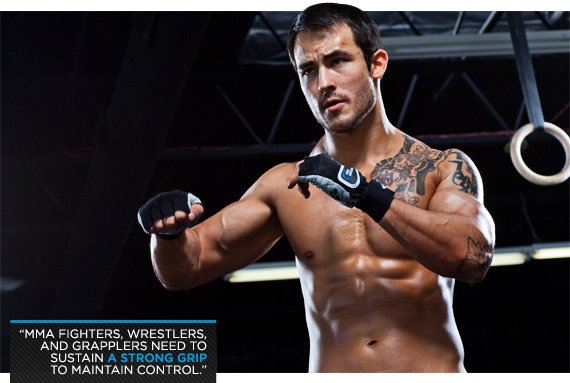 I've been a police officer since 1985, and I've worked my entire career on the street. I've been involved in thousands of arrests over that time, and it didn't take me long to learn something every good cop knows: Watch the hands. 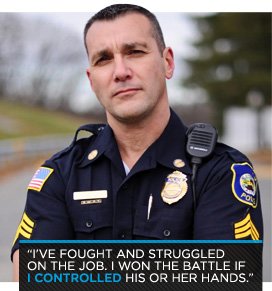 If someone wants to hurt you, they're most likely going to use their hands. So my partners and I have always used a simple rule with combative persons: Grab a wrist and don't let go. I can't recall how many times I've had to fight or struggle with someone, but when all else failed, I still had 90 percent of the battle won if I could control his or her hands.

One officer I worked with had to battle for his own handgun. A bigger, stronger guy had a hold on his gun. Luckily, my friend was able to maintain his grip until backup arrived. He told me he knew that if that suspect was able to pull his gun away, he probably wouldn't be around to tell the story.

This is why, in my field, grip strength is not negotiable.

How Not To Do It

With this in mind, I decided approximately a year ago that I would make forearm training a priority. Once each week I dedicated an entire workout to training the muscles of my lower arms. I know you're thinking: How long could a forearm workout take? This was my routine:

I mixed up each workout by using barbells, dumbbells, or cables. The total routine takes 30-40 minutes. Even though I was murdering my forearms, I felt little delayed-onset muscle soreness (DOMS) the next day, and I didn't see much muscle growth. Popeye status was still beyond my grasp.

In The Thick Of It

I started to do more research. I learned about thick-bar training and the concept of "irradiation." According to a 1992 study in the International Journal of Industrial Ergonomics, a muscle will contract harder if the surrounding muscles are also contracted. So if you perform curls, your biceps will work harder if all your forearm muscles are fully contracted. The same pertains to any triceps exercise.

In action, this meant that as barbell thickness increased, so did the neuromuscular response. I learned that thick bars are beneficial in pressing movements, such as the bench and military press, because they take harmful stress off the wrists and elbows.

This rang a bell with me. Back in my competitive bench-pressing days, one common technique for increasing your bench was to squeeze the bar hard as you pressed. This was based on the concept of irradiation. However, the standard one-inch bars in most gyms are too thin to sufficiently squeeze. This is why thick bars were developed. 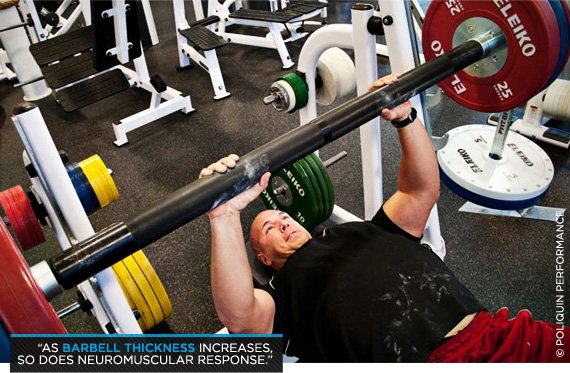 Charles Poliquin, one of the most respected trainers in the country, has always been an outspoken advocate of thick-bar training. His Poliquin Strength Institute in Rhode Island has three-inch wide barbells, and dumbbells more than two inches wide. When asked once about building bigger biceps, Poliquin's answer was, "Work your forearms." As for how to work them, he wrote in 2010, "If nothing else, using thick implements takes care of grip and forearm training."

Sounds great, right? The only problem is that your standard commercial gym probably doesn't have thick bars. You could invest in a Watson thick bar or a ball barbell—which, like it sounds, has two baseball-sized globes in the grips—but they're not cheap and make sense only if you have a home gym.

Are we cursed to live with forearms that look more like Olive Oil's? Not quite. Recently I heard about a product called Fat Gripz. The concept is brilliantly simple. They're just heavy handles made of silicone, and when slid onto a barbell or dumbbell handle, they transform it into a thick bar.

I had to try these for myself, and I decided the real test would be using Fat Gripz during my pull-up workout. I believe pull-ups are essential in maintaining a good strength-to-body-weight ratio, so they form the basis of my back work. Using the Fat Gripz, I figured, the toughest hand placement would be palms facing me (supinated) because most of the tension would be on my thumbs. The bar I was using was so thin that the Fat Gripz could spin around it, making it even tougher to hold onto.

For my first set, I can always get 15 perfect full-range pull-ups. With the Fat Gripz I could only hang on for 10. I did three more sets with this grip, finishing with five reps. I couldn't believe how difficult it was to hold on. I then went to a neutral (palms facing each other) grip for four sets of five, and finally the pronated (overhand) grip for four sets of five. By the end, my forearms were so pumped I could see my own pulse beating.

Using the Fat Gripz brought pull-ups to a whole new level of difficulty. The next day I felt DOMS in my forearms like I never have before. The pain was from my elbow all the way to my wrist, and it lasted for three days. Since then, I've experimented with both thick-bar training and Fat Gripz with various exercises. After about two months, I noticed new growth in my arms, and people have commented on how vascular my forearms have become.

If you make the commitment to go wide—either by lifting with a thick bar or an accessory like Fat Gripz or Grip4orce—you'll probably also see an initial decrease in the amount of weight you can pull. A 2007 study in the Journal of Strength and Conditioning, for instance, found that deadlift 1RMs dropped 28 and 55 percent when using two- or three-inch bars. In the long term, both your grip strength and overall strength will improve, so those numbers should come back up.

In the first few days after making the switch, you might have trouble opening a tube of toothpaste, let alone a can of spinach. Don't say I didn't warn you!