Get To Grips With Hand Strength: Develop Your Grip.

Grip training can heavily influence the amount of weight lifted, and develop the forearms to such a degree that one is prompted to take a double take ... Read below to learn why grip strength is important and about types of exercises available.

Typically, bodybuilders, and indeed athletes from other codes, are not asked how much they can grip - the popular line of questioning seems to be around how much one can bench, or how large ones biceps are. However, grip training can positively impact most athletes, in terms of both the quality of their training programs and the type of results they attain.

Grip training can heavily influence the amount of weight lifted, for all upper-body movements, and develop the forearms to such a degree that one is prompted to take a double take, upon first seeing the forearm-bulging results of grip training first hand.

Certain types of grip training, in and of itself, can provide an ego-boosting experience, as the trainer is able to handle greater gripping poundage's on a weekly basis, provided they consistently train in the correct manner.

Training and aesthetics aside, a strong grip will certainly assist if one becomes involved in a fight, where the power of their grip might determine the outcome. Read on to find out exactly how to develop your grip, and why it is important to do so.

Developing gripping strength will assist when it come to grappling in the context of a martial arts or wrestling fight. It will also add snap, and power, to a punch, giving boxers who practice gripping exercises an additional advantage.

When gripping an adversary, one with weak forearms, and gripping strength, might sustain an injury to the wrist area or worse, end up on the ground with their opponent kicking their face in.

Often, the key to winning a fight is to maintain a vice-like hold on your opponent over a prolonged period, and the key to maintaining such a hold is to develop phenomenal gripping strength.

Specific gripping exercises, of which there are many (these will be explained later), develop the forearm musculature to a significant degree. Those with the best forearm development are often people who work in a profession that requires a constant gripping of objects (concrete workers for example).

If one's forearms are lagging, specialized grip training could be just the thing they need to break this plateau. Direct forearm work is good, and should be continued, but gripping work stimulates all forearm musculature, as a whole, and provides the additional volume needed to enhance new growth (the forearms, like the calves, need a lot of work to respond).

An improvement in gripping strength generally means an overall improvement in quality, as far as lifting immense poundages in other movements is concerned. For example, bent rowing, a fundamental back movement, will suffer if one's grip is not up to standard. There could always be an argument made for wraps, but these are controversial at best, and are thought to compromise technique.

So, a strong grip is essential to training progress, as most movements are dependant on correct gripping technique and strength. Chinning, as well, relies on a solid grip, and heavy benches could potentially cause wrist injury in those susceptible (i.e. those with a weak grip).

Day to day activities such as turning doorknobs, opening jars and conducting mechanical repairs, also benefit from a strong grip. The type of wrist action used when doing any of the above is a twisting motion, and there are specific exercises (which will be explained later) that can be done to improve this.

This type of grip strength is demonstrated when one crushes a can of drink (strongmen in particular, not your average person). A crushing grip is also used when shaking hands, or, in a fighting context, grabs their opponents wrist. Analogously, a table-vice mechanism, has almost an identical action to that of a crushing grip, in that the stationary side of the vice (the palm) has a component (the fingers) that closes toward it as it crushes. Indeed, with crushing strength, the fingers and palm contribute almost exclusively to the action: the fingers crush while the palm provides the platform - the thumb has less of a supporting role. Forearm muscles targeted with gripping movements, are mainly the flexors, with secondary stress on the extensors.

Holding a heavy plate between the thumb and fingers, as it hangs toward the ground, is a demonstration of pinching strength. Training for pinching strength has little in the way of a real world application (other than targeting a pressure point during a confrontation perhaps), but it will add to thumb and finger strength and help to develop respectable size in both the extensor and flexors of the forearms.

Pinching grip is generally harder to train for than the crushing grip, given the awkwardness and difficulty of the specific movements needed to target this area.

This type of grip involves the thumb, fingers and palm (almost a cross between the crushing and pinching grips), and is used most often in a real world situation for controlling an object (a steering wheel of a car for example), or person in a confrontation.

In a fighting situation, the holding grip is often used to transition between pinching or crushing, as ones opponent is being controlled.

All gripping movements will utilize different types of strength, to varying degrees. Before moving on to the most effective exercises for developing grip, the three main types of strength used in this process will be covered:

Grip training exercises can be grouped into two types: suspension and crushing/squeezing/tearing exercises.

These involve, as the name suggests, suspending a weight, while gripping it with the wrist. They work primarily the pinching grip. Dangers are inherent in this type of training, as the feet could be crushed if the weight is dropped, or, if the grip gives out during a hanging movement, an injury could occur. 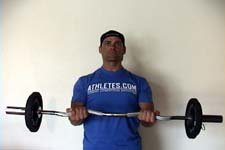 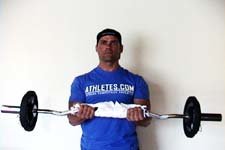 Static Barbell Hold, With & Without Towel

These movements help to build vice-like strength in the hands, while establishing significant size in the forearms. The following exercises utilize the thumb, fingers and palm, which make them total grip strengthening movements.

The following program is designed to build total grip strength. Certain exercises are omitted (Towel dumbbell rows and curls can be done during back and biceps training respectively). Training days can be shifted to suit current training program, if necessary.

Don't be overwhelmed by the workload. Given the relatively non-taxing nature (in terms of stressing the entire body) of grip work, regular training sessions (back/biceps etc) can be easily worked around. The Friday and Saturday sessions can be done in front of the TV or in a similar, relaxed, setting.

There are many grip training exercises available. The ones featured in this article are what I consider to be the best and most efficacious, in terms of both developing phenomenal strength, and filling out the forearms. Some of the movements featured are obscure, and used primarily as an aid to martial artists. However, they work equally as well for both strength athletes, and the general population.

Developing grip strength will enhance not only the ability to handle heavy objects, but assist with injury prevention due to increased wrist/hand strength, enhance quality of training due to an increased ability to handle weights without the grip giving out, develop massive size in the forearms, and help with day activities such as opening jars. Developing gripping strength can be a lot fun, and is certainly worth committing to.