Our interview today is with Gina Davis, who was the overall women's winner of the 2004 Nationals. She is very inspirational so continue right here for some great information from a pro.

Power, strength, and a passion for the sport of bodybuilding, epitomize the walking contradiction that is the 2004 National heavyweight and overall champion Gina Davis.

As far as female bodybuilders go, Gina is big at an off-season weight of 200 plus pounds. Yet, Gina also has a feminine quality that nicely complements her massive muscles. From a young age, Gina was impressed with large muscles. Her idol was none other than the legendary Corina Everson.

Having decided to give bodybuilding a shot 14 years ago, Gina, blessed with great genetics, quickly developed her potential to such a degree she won overall at her first NPC contest nine years later. Today, Gina contemplates a long, successful, career in a sport she feels will benefit from having her among its ranks.

In 2006, Gina will enter her first pro shows as a lead up to her ultimate goal: Ms. Olympia. Gina truly feels she will one day capture bodybuilding's most coveted female prize. I, for one, will not argue with her on this point. I spoke with Gina recently and she shared her story with me.

[ Q ] Hi Gina. Please provide some background on yourself. 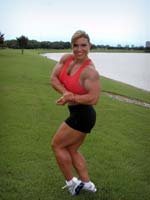 [ Q ] Where are you from, and what got you started in bodybuilding?

My home is Texas, but I now reside in Oklahoma. I started bodybuilding in 1990 and waited 9 years to do my first contest. I have always been athletic and naturally gravitated towards bodybuilding.

I admire muscular physiques, be they male or female; they epitomize strength, dedication, and passion for the pursuit of the "best" you.

Oh my gosh! I have always had trouble with this question. In a word:
ELATION!

Never have I worked harder for something in my life. I became pretty ill two weeks before the contest with an inner ear infection, which caused intense dizziness and nausea. Somehow I made it through and couldn't have been more thrilled with the outcome.

[ Q ] Describe your 2004 Nationals preparation plan. How did you train and what did you eat to prepare for this show?

My ace in the hole was working with my new trainer, Howard Huddleston in Oklahoma. He is simply the best in the business. 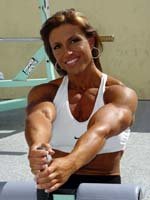 Click To Enlarge.
My Ace In The Hole? Howard Huddleston

My training was nothing short of torturous for an entire 20 weeks. My starch carbs were very limited and consisted of rice and oatmeal only. My protein source was chicken and plenty of veggies. I did 2 hours of cardio per day on a stepmill 6 times a week. That had to be the worst part - I hate cardio!

Well, I was planning for my first pro show to be the Ms. International in early 2006, but I tore my left biceps tendon in April of this year preparing for that show.

That set me back after having to rehab post-surgery. We are looking at the calendar now, and if all things are back to where they need to be, we will pick a show probably in mid-to-late 2006.

[ Q ] How do you feel you will go on the pro circuit? What have been some of your experiences as a pro so far, bearing in mind your injury of course?

I think I have what it takes to establish a more positive image in the sport. In terms of placings, the goal is to be Ms. Olympia one day.

Click To Enlarge.
A Positive Image In The Sport.

Sounds cliche, but I believe I can do it. My experiences as a pro have been limited due to my injury. All of the well wishes and support have been overwhelming and I am truly grateful.

[ Q ] What are some of your better qualities?

I am a very giving person. I am also very approachable, intelligent and witty (or I think I am anyway. lol!). My loyalty to my family and friends is unparalleled. I would go to the wall for the people I care about.

[ Q ] What traits should one have to become a good bodybuilder in your view?

Discipline, intelligence, and a great sense of self. It's disheartening to hear of a promising bodybuilder who lacks the self-confidence to really achieve their goals and dreams.

[ Q ] What has been your greatest moment in bodybuilding Gina?

Absolutely, without a doubt, winning overall at the 2004 NPC Nationals with my Houston Crew, my OKC Crew, and my family there to share in my joy.

[ Q ] What is your strongest muscle group (from an aesthetic standpoint) and why?

Earlier in my career I would have said "biceps", but now it would have to be legs. They have really grown and taken on great shape which is why my upper body has some catching up to do since my injury. 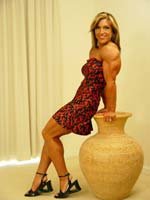 [ Q ] Do you have any other career goals? What do you hope to do after bodybuilding?

Yes, I help Howard at his gym 'Body Tech' in Oklahoma where I am also a personal trainer. My educational background is in Biology where I excelled in anatomy and physiology. My new business venture is called "PROLOOKS" and involves helping ladies with hair and makeup, tanning, and posing. I am very excited about it!

Click To Enlarge.
"As Long As I Have The 'Love'
I Will Continue To Compete."

[ Q ] What tips would you give a woman who wants to become a top bodybuilder?

Find a successful trainer who specializes in preparing females. Stay true to yourself and never sacrifice your health for a trophy.

[ Q ] What is your view on supplementation? Which ones do you use and why?

I am bad about not using any supplements in the off-season. I only use protein powder. Come contest time, I utilize multivitamin/ mineral, glutamine, BCAA's, and protein powder.

[ Q ] Who in women's professional bodybuilding do you admire, and why?

I admire Betty Pariso for continuing to fight our "battles" as our female representative. She has her work cut out for her!

[ Q ] What is it about bodybuilding that attracts you to the sport?

The "uniqueness" of it. The fact that not everyone can do it is intriguing to me as well as the day to day accomplishments in the gym. 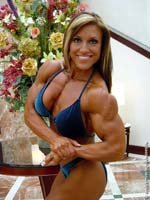 Click To Enlarge.
The "Uniqueness" Of Bodybuilding Is Very Attractive.

[ Q ] Describe a day in the life of Gina Davis.

To be Ms. Olympia of course! Beyond bodybuilding, just to be happy in whatever endeavors I choose.

[ Q ] Thank you for your time Gina it has been my pleasure talking to you. Is there anything more you would like to add?

You're welcome! I appreciate the opportunity to be interviewed. I would just like to say that it has been a long road through the transitions in my life, and I am eternally grateful for all of my friends and family that have been so supportive. The best is yet to come... 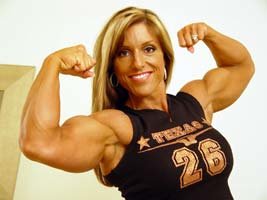 Click To Enlarge.
The Best Is Yet To Come...