By rough estimate more power is being generated in a standing press of 450 pounds than in a bench press of 600 pounds; which is not surprising. Learn more about compound exercises from the legendary Arthur Jones!

The standing press is a good example because it provides good—if not quite direct—workloads for several major muscles; the bench press is a bad example because it provides reasonably direct work only for the anterior portion of the deltoids, and a lower order of even less direct work for the triceps and pectorals—the primary problem with the bench press apparently being that of direction of movement, the resistance is being moved in a direction that is almost never encountered in any sort of normal activity—and thus the body has never developed great strength for movements in that direction.

In fact, there is actually very little difference between the strength levels of trained individuals if they have been following a well rounded program; an Olympic lifter can usually press about as much one way as he can the other, and it is not uncommon for a man to be able to press more in the standing position than he can on the bench.

In the case of powerlifters, it is not surprising that the bench press shows a higher level of strength—since such men specialize on bench presses for years, while doing little or nothing in the way of standing presses.

At the moment, the existing records are approximately 450 pounds in the standing press and 600 pounds in the bench press—a ratio of four to three in favor of the bench press; but such a comparison is actually meaningless, because the range of movement is so much greater, and the speed of movement is so much faster in the standing press.

In Order To Measure Power, Three Factors Must Be Considered:

And in a comparison between standing presses and bench presses, two of these factors—distance and speed—are totally ignored.

But even a rough estimate that takes all of the necessary factors into consideration will quickly show that far more power is being generated in a standing press of 450 pounds than in a bench press of 600 pounds; which is not surprising, since the body is then working in a far more efficient direction.

The bench press is primarily popular simply because it is far easier than the standing press—and because a man can handle more weight in this movement, especially if he employs "cheating" methods, which are more difficult to do and impossible to conceal in a standing press; but insofar as its ability to develop useful strength, the bench press is an exercise of very limited value—the returns are not in proportion to the effort required.

An equal amount of time and energy devoted to the practice of standing presses will result in at least three times as much benefit—useful strength will be built in a direction of movement that can be employed in almost any sport, especially putting the shot and boxing.

While it might be thought that bench presses would provide the proper direction of movement for boxing, a moment's consideration will make it obvious that this is simply not true—in the last few inches of movement just before landing a heavy blow, a boxer is leaning far forward and his upper arm is in approximately the same position that it is in during the last part of a heavy press. Almost exactly the same position is used in putting the shot.

Many coaches recommend the practice of presses on an incline board for building power for the shot put—but this is a mistake, the direction of movement, the angle involved, is almost exactly the same in a standing press as it is in an incline press—at the point where the greatest power is being produced.

Secondly, standing presses involve all of the muscles of the body—causing the development of balance and muscular coordination; this is not the case with the incline presses.

Quite frankly, the author considers incline pressing a dangerous practice—especially if this exercise is practiced in conjunction with leg presses; to the exclusion of standing presses and squats.

It is easily possible to build great strength into the shoulder girdle and upper arms by doing incline presses—and leg presses will also build great power in the thighs and buttocks; but if such power is built in this fashion, a literally dangerous situation has been created—because a man with such development will have created a chain with a dangerously weak link, his lower back.

If he attempts to use either or both forms of strength in the performance of a normal activity, he is almost certain to injure his lower back—and it is not impossible to literally break the back if such effort approaches a maximum effort.

Bench presses, incline presses and leg presses are all useful exercises, but they should never be practiced to the exclusion of standing presses and squats—and stiff-legged deadlifts, for the lower back, should always be included in any sort of training program. 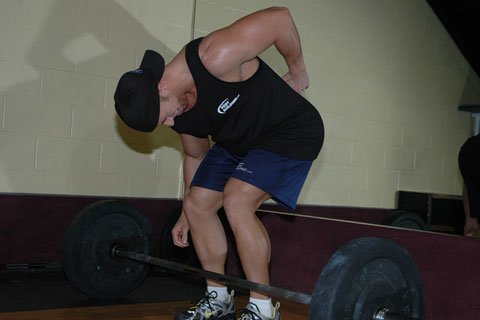 Click To Enlarge.
Such Development Will Create A Dangerously
Weak Link In The Form Of Your Lower Back.

Compound Movements Are Better For Athletes

Up to this point in this chapter, all of the exercises that I have mentioned are compound exercises—some good ones, some fair ones, and some poor ones; but in most cases, even a poor compound exercise is better than a good isolation movement—because a compound exercise, in addition to developing strength, also leads to great improvements in muscular coordination and balance—a result that does not come from the practice of isolation.

An isolation movement is an exercise that involves only one muscle—or one isolated part of the body; examples are—concentration curls with a dumbbell, thigh extensions, triceps extensions and wrist curls.

Such movements have their places—especially in the field of restorative surgery and in bodybuilding; but they are of almost no use in a training program designed for athletes—especially football players.

Brief treatment of minor injuries by the use of isolation movements is acceptable practice but only if such treatment is very brief, and only if it quickly leads to the practice of compound movements; otherwise, in almost all cases, such movements will create a situation where additional injury or re-injury is almost certain.

This happens because the prolonged employment of isolation movements will lead to the development of isolated areas of strength that are badly out of proportion to the strength of the surrounding tissue.

As supplemental exercise to the employment of compound exercises, isolation exercises are frequently justified—but only in that capacity in the vast majority of cases.

There are exceptions, of course; one such exception is the wrist curl—an exercise that will build size in the forearms and strength in the wrists, and without any slightest danger from too much strength in an isolated area. But such exceptions are just that—exceptions; and most isolation movements should be avoided like the plague by athletes during their normal training program.

If a proper selection of exercises is made, then only a few movements are required to develop almost the ultimate degree of strength and muscular size. The best barbell exercises?

In no particular order, they are—squats, stiff legged deadlifts, standing presses, heavy barbell curls and some form of pullover, either stiff-armed or bent-armed.

If other equipment is provided—as it should be—then these can be supplemented with various forms of chinning movements and parallel dips.

All of these exercises are heavy movements—if performed properly—and too many sets of such exercises will lead to a condition of overworking; results will still be produced if such overwork is not carried to extremes, but far better results will occur much more quickly if a properly designed training program is provided.

From being THE resource for High Intensity Training (HIT), to bodybuilding, strength training for sports, strongman, and for just meeting your individual training goals.