Understanding the functions of each of the hamstring muscles is the first step towards devising an effective hamstring workout. Learn why!

The hamstring muscle group is made of three separate muscles; the semimembranosus, the semitendinosus, and the biceps femoris. Understanding the functions of each of these muscles is the first step towards devising effective hamstring workouts.

Semitendinosus and Semimembranosus: They are also known as the medial hamstrings. They cross the hip and the knee joint and are therefore involved in extending the hip and flexing the knee. They also assist in turning the knee inward (medial rotation).

Biceps Femoris: It is also known as the leg biceps. Similar to it's cousin, the biceps brachii, as well as it's name suggests, the biceps femoris consists of two heads: the long and the short head. The long head crosses both the hip and the knee joint and is involved in extending the hip and flexing the knee. The short head only crosses the knee joint and is only involved in flexing the knee. Both heads assist in turning the foot outward (lateral rotation of the knee).

Muscles Synergistic To The Hamstrings

The Basis Of Effective Hamstring Training

There are nine important training paradigms that are relevant to hamstring training.

Hamstring Training Paradigm I
* Train Hamstrings Both as Knee Flexors and Hip Extensors.

By their kinesiological nature, hamstrings have two major functions:

a: Knee flexion: Bending the knee. Usually trained by all the forms of Leg Curls devices offered on the market: seated, prone, kneeling and standing. MRI films will show in the case of the Supine Leg Curls, the biceps femoris, semitendinosus, sartorius and gracilis are recruited.

b: Hip extension: kicking the leg back like in the sprinting motion. Exercises that train that function are from the following exercise families: semi-stiff leg Deadlift (i.e. Romanian Deadlifts), Good Morning (i.e. Seated Good Mornings), Back Extensions and Reverse Hyperextensions MRI studies will show that both the Semi-Stiff Leg Deadlift and the Good Morning involve the adductor magnus, adductor brevis, biceps femoris and semi tendinosus. 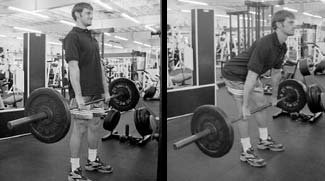 The information given above implies that your hamstring workouts should involve exercises for both the hip extension function and the knee flexor function. Recent anatomical research points out what track and field coaches have known for years: hamstrings are connected as a chain to the glutes and back extensors (i.e. erector spinae). This through the sacro-tuberal and dorso-sacral ligaments.

From testing on the Cybex 600 Unit, we have found two strength disparities between the two legs in many Olympic and professional athletes. It appears that the dominant leg of some of these athletes will often be as much as 20% stronger than the non-dominant leg--these athletes definitely need single limb training to prevent injuries.

One should know that the dominant leg is not necessarily on the same side as the dominant hand; in other words, it is not because you are right-handed that your right leg is dominant in the lower body. Furthermore the neural drive will be greater to the hamstrings if only one leg at a time is trained.

Hamstring Training Paradigm III
* Stretch the Hamstrings Both at the Hip and Knee Joints to Facilitate Recruitment.

This means the knees must be extended and the hips flexed in the starting position of every leg curl exercise. Therefore in the Standing Leg Curl exercise, you would need to bend forward at the waist and start with the working leg straight before lifting.

Increasing the range of motion of your quadriceps prior to a leg curl exercise will increase the amount of motor units used in the hamstrings during the exercise and therefore the effectiveness of the chosen exercise. Since the quadriceps is the antagonist muscle to the hamstrings, and that stretching will allow it to relax, the force of the contraction in the hamstrings will be much greater in the subsequent contraction.

This can be clearly illustrated when driving a car while sitting too close to the steering wheel. When the knees are bent, the gastrocnemius becomes ineffective, and it is more difficult to apply the brakes. It is the same reason why seated calf raises are prescribed to recruit the soleus muscles at the expense of the gastrocnemius muscle.

This situation is only temporary. The way to circumvent the problem rapidly is to do the concentric contraction with the feet dorsiflexed and lower the resistance for the eccentric contraction with the feet plantar flexed. Since you are stronger eccentrically than concentrically, the hamstrings will start getting a greater overload during the eccentric lowering because the gastrocnemius will be inactive in the plantar flexed position. It will be a way to ease into switching to the more effective form of leg curls.

Hamstrings are made up of a high percentage of fast-twitch fibers. Therefore, they have very little strength-endurance, that is the ability to do repetitive work at a given percentage of maximum. When you use more than 8 reps during hamstring exercises you are training below 70% of your 1RM (one-repetition maximum), which is the lower intensity threshold to promote hypertrophy and/or strength response.

Numerous studies on the relationship between maximal strength tests and the number of repetitions performed (at a given repetition maximum) have shown repeatedly that the hamstrings are not gifted for reps. Although you may be able to perform 10-12 reps at 70% of your maximum on the Bench Press, you will probably only be able to complete 7 or 8 reps with the same percentage on the Leg Curl. If you use 15-20 reps per set on hamstring exercises--a repetition range often promoted by the Nautilus disciples--your training intensity would be approximately 50-55% of your maximum. Such a low intensity level would not provide enough tension for these high fast-twitch muscles to grow.

Enter the amount of weight you lifted (Lbs/Kg) and the number of reps you completed. Your One Rep Max (1 RM) will appear at the bottom left, and your various percentages of 1 RM will appear on the right side.

Once again, because of their high fast-twitch fiber make-up hamstrings respond well to eccentric work. Eccentric (negative) training refers to lowering heavier than normal loads for a given exercise. Triple jumpers and long jumpers are known for their superb hamstring development. Outside the sprinting they do, they have to absorb high-impact landings, which elicits high levels of eccentric tension from the hamstrings.

Hamstring Training Paradigm VIII
* Strive for Balance Between the Medial and Lateral Heads of the Hamstrings.

When there is a muscular imbalance, the body never lies. To test simply if there is a head of hamstrings that needs remedial specialization, select a weight you can do for 6RM in the Leg Curl with your feet in the neutral position. As you reach muscular failure, your feet will rotate in one direction if there is a lack of balance between the two heads of the hamstrings.

If they turn towards the midline of the body (medial rotation) your semi-tendinosus and your semimembranosis are too strong for your biceps femoris. If they turn away from the midline of the body (lateral rotation), your biceps femoris is too strong for your semitendinosus and semimembranosus. When you turn your feet inward during leg curls, you also facilitate the recruitment of the gracilis.

Variety is an essential requirement for maximal hamstring development because each exercise offers a unique pattern of overload. You probably have more hamstring exercises at your disposal than you think. Let's say that your gym has the four major types of leg curl units: seated, lying, standing and bent-over kneeling. This will give you an arsenal of 12 hamstrings curl exercises: 4 machines x 3 foot positions (neutral, inward, outward) = 12 permutations.

Incorporate our eleven training paradigms into your routine and you'll immediately begin to see and feel the results. Keep in mind that optimal hamstring development requires more than just a few sets of Leg Curls at the end of your workout. To take your training to the next level of development, make hamstring training a priority in your training and work them as hard as you would your quads.

For More Info Be Sure To Check Out Charles' Website At: http://www.charlespoliquin.net.

Charles is known worldwide for producing faster athletes. When a country wants a Gold medal, they come to Charles.