A strong, well-defined midsection; that's what every man, woman and, uh, child walking the face of the earth seems to want. Learn how to get a great set of abs with these fiery workouts.

A strong, well-defined midsection; that's what every man, woman and, uh, child walking the face of the earth seems to want. However, most of those men, women and children are going about it the wrong darned way. Fortunately for you, you have Bodybuilding.com and John Berardi. And as a result, you know we don't take too kindly to the "Oxygenesque" claims of "Fab Abs in 20 days" or "Tighter Tummy by Tuesday".

Instead, you know that the greatest hurdle preventing the average physique from flaunting a more defined set of abs is a nasty layer of subcutaneous fat; fat that takes time to get rid of. The knowledge that no insane number of abdominal exercises will counterbalance the effects of polishing off an entire box of Krispy KrÃ¨me donuts is a commendable starting point.

So consider yourself ahead of most. However this is no excuse for you to focus only on that fat loss and ignore the benefits of incorporating a solid ab routine into your workout schedule. When I look around the gym I wonder why it is that most are willing to dissect their arteries to get that last rep in the squat cage, but have no problems skipping their ab work. Each exercise represents a piece in the physique puzzle.

What we propose to you here are a few new ways to improve that lame old ab routine you've been doing or failing to do. These exercises also come with money back guarantee. We guarantee that these exercises will have you balled-up in the fetal position within 3 minutes or your money back. Yes, we realize that ab work can be hard. Surely, lying on the floor in the fetal position while grunting and groaning isn't the way we like to be seen in the gym either.

However, although you may feel rather ridiculous either hanging like some nocturnal creature from the squat cage bar or doing the backspin in the aerobics studio, take comfort in the fact that the moment you go home, someone will be trying to secretly copy your new exercises. And if that's not enough you can always seek solace in the fact that no one looks sillier than the spandex clad folks trying to Ab Roll their way to a "better tummy".

So here are the 4 fiery exercises 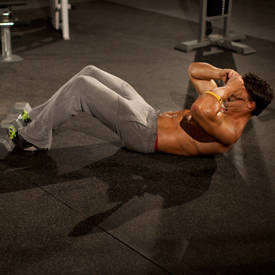 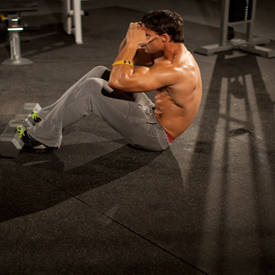 This exercise will seem ridiculously simple at first glance and quite similar to the good ol' sit-up of days-gone-by. But you must not be fooled.

To begin, start in the normal sit-up position - back flat on ground, hands behind the neck or over chest, knees bent at about 120 degrees (as you get stronger, this angle should be decreased to increase the level of difficulty). During the first few workouts, you are likely going to require someone to exert a very slight pressure downwards on the feet as they will be prone to raising right up off the ground.

Not to worry though as you may eventually be able to do this alone. From the assumed position you will try to curl your body upwards with a slow, deliberate contraction. There is no heaving momentum at the bottom allowed - and this is what will undoubtedly have you stuck at an embarrassing 45 degree angle for the first few attempts.

Don't give up - think of the benefits of the isometric contraction as you waver there and take comfort in the fact that after a few days you may be able to stand erect again. Work up to the point where you can do these alone with no one holding your feet down. After this, decrease the angle of the knees and hips so that your feet get close and closer to your butt with each workout.

How about a little contest. We don't have a name for these yet so the reader who comes up with the best name for these gets a Science Link t-shirt (when we actually get around to making them up). Until then, this exercise will be known simply as "exercise #2".

This exercise will require a partner each time you do them. Choosing your girlfriend/boyfriend might not be wise because during this exercise you will find yourself spitting and cursing at your partner for going: (a) too slow, (b) too fast, (c) using too little force, (d) using too much force, (e) all of the above. All that can be said here is "suck it up". Your abdominal muscles should feel like they are being tweezed away from the point of origin one fiber at a time if you are executing this correctly.

Assuming the position involves lying on your back with the knees together, hands behind neck, and upper body flexed forward so that the elbows are resting on knees. The hip and knee angles should be about 90 degrees each. During this exercise, your partner will grasp onto your ankles and simultaneously pull outward while exerting a downward pressure.

This pressure this should cause you to roll, in ball-like fashion, to the point where your feet are on the ground and your body position has remained elbows on knees. The whole point is that you're partner is trying to "pull you apart" (the knees and the elbows) while you are desperately trying to hold it together. Do not be alarmed if during the first few workouts your lower body seems to unwittingly unfold itself away from your upper body leaving it bewildered and shaking on the ground. This isometric contraction is both challenging and painful to perform correctly. Commend yourself for getting one rep here, as these are much harder than they look. 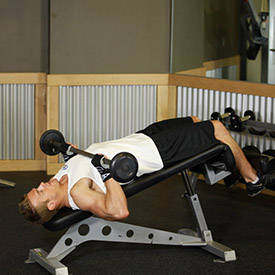 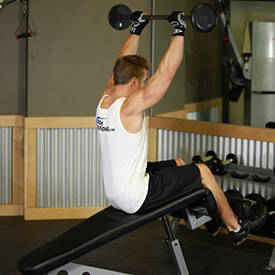 Think back to when you were young and hanging upside down from anything was a veritable thrill. Well, it is time to relive those exhilarating days of youth, as this exercise will require you to find some apparatus to hang from. We have found success both in the squat cage (welded upper bar) and at the hyperextension machine.

Although this one is pretty self-explanatory and it basically involves only three commands (hang, sit up, and groan in pain), there is a bit more to it than that. The idea here is to start by hanging completely upside down with the arms crossed over the chest. Then you should sit up to about 90 degrees. When in this position, try to suspend yourself for 4 seconds.

While suspended, twist back and forth, contracting the obliques while the right elbow touches the left knee and the left elbow touches the right knee. After the 4 deadly seconds, sink back down and repeat. Two important keys for this exercise are having someone you trust to anchor your legs and not allow you to fall on your head and secondly, draping an exercise mat around the bar to help minimize posterior knee discomfort. 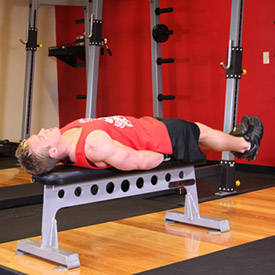 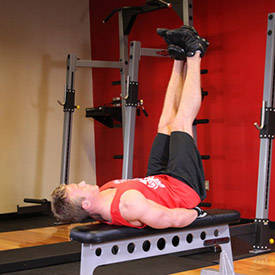 Just incase you are thinking that you may be able to redeem your 'guarantee', we urge you to think again. This exercise is has been appropriately named.

Find yourself a flat bench to lie on. Choose a bench that is high enough off of the floor to allow you a normal seated position (i.e. femur parallel to floor). You will be lying such that your powerful posterior is at the edge of the bench (but still on the bench); legs are together and straight out. Using a smooth abdominal contraction, pull your knees towards your chest.

Continue the contraction by lifting your lower body off of the bench while straightening your legs towards the ceiling. This should be done while gripping the bench above your head firmly with both hands and using your arm strength sparingly, concentrating on isolating your abdominal muscles.

At the end of this movement you will look like a giant, red-faced, sweaty, quivering weight lifter attempting a reverse handstand. After a 3 second pause at the top, lower yourself using the opposite motion as described above. For the two next reps, twist your torso in each direction while coming up so that you can activate the obilques. Once you've gone through a few agonizing reps we wish you congratulations as you are now "Finished"!

Ok, with the exercises laid out, now it's time to get down to some ab training. Do these four killer exercises in giant set fashion (one after another) and you'll see some crazy increases in ab strength faster than you can say six pack.

And if your abs don't thank you for it, which they won't for at least the first few weeks, your lower back will thank you the next time you accidentally deadlift without perfect form! Just remember that a minor concussion is a small price to pay in the pursuit of "killer abs."

It is that time of year again. Ab Season has arrived. As warm weather approaches people from around the world rush to gyms in quest of the ultimate six pack. Most of them have no concern in developing other body parts. They just care about developing those rippling abs. "I just want to concentrate on toning my abs". If I had a dime for every time I have heard that statement I would be a billionaire. In the following article I would like to discuss the role the abs play in movement and dispel some of the myths surrounding abdominal training.

The deepest layers of the abdominal wall are called the transverse abdominus. These muscles serve as one of the primary respiratory muscles. The abdominals are constantly activated as they stabilize the torso during most movements. Some coaches say as ab strength increases total body strength will also increase.

John Berardi is president and founder of Science Link Inc and johnberardi.com. John specializes in human performance and nutrition consulting.