AM/PM training is one type of training setup coming up more frequently. Here are the pros and cons for each type so you make an educated decision on whether it is right for you. Find out more.

One type of training setup that seems to come up more and more frequently, as individuals are looking for ways to really advance their workouts and drive up the intensity, is AM/PM training programs.

What this entails is basically either dividing your workout up, so half of it is performed in the morning and the other half is done in the evening, or you complete two separate workouts entirely.

Typically when you're dividing one workout up into two components (say legs for example), you'll do your compound lifts of squats and deadlifts in the first workout using a lower rep range but higher weight, and then perform your isolated exercises such as lunges, leg extension, and hamstring curls later on in the second workout using a higher rep range with less weight. 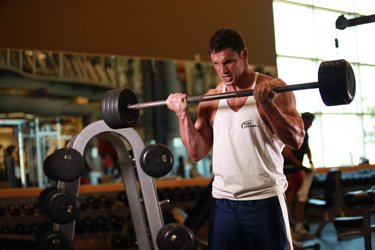 Click Image To Enlarge.
One Type Of Training Setup That Seems To Come Up
More And More Frequently Are AM/PM Training Programs.

On the other hand if you're performing two different workouts in the AM/PM period you would, for example, do a lower body workout in the morning and an upper body workout later on in the evening.

This setup has both pros and cons, so understanding the following will help you make a more educated decision on whether it is right for you.

The first benefit you can get when you take the route of dividing a single workout into two is that you'll get more of a chance to add in specialization training.

For example: if you're doing an entire upper body workout in a single session, you may only perform one or two exercises for the chest. But if you break your upper body into two workouts (over the course of the day) you could do bench pressing types of movements in the first workout and isolation movements for the pecs only (flyes, incline flyes) in the second. 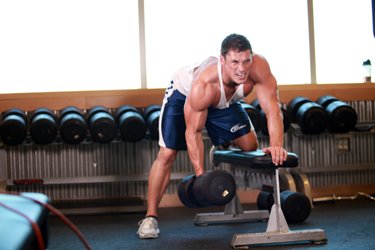 Click Image To Enlarge.
You'll Get More Of A Chance To
Add In Specialization Training.

Likewise, if you're doing upper body and don't want to perform any arm exercises because you're focused on compound movements, an arm workout in the evening would follow along the same principle and allow you to form a complete workout over the course of the day.

The second benefit to doing AM/PM workouts is that each workout will be shorter. Some individuals really struggle with longer workouts as they suffer from energy crashes or just fatigue very quickly, so this type of setup usually benefits them.

This will be most applicable if you're dividing up an upper body or lower body workout into two, allowing you to create short thirty to forty-five minute sessions.

The third nice thing about the setup where you perform both an upper/lower workout over the course of a day is if you are involved in any type of sports training; you should find that it's easier to schedule this in.

If you were doing a traditional upper/lower split, then you'd have four days in the weight room, which makes it much more difficult to get in your sports training plus have time for days off. Granted your weight days will be much more intense with this setup, but it can be a good trade-off if it will allow you more total days off a week. 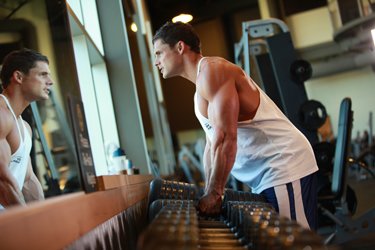 Click Image To Enlarge.
Your Weight Days Will Be Much
More Intense With This Setup.

Finally, the last pro to splitting your workouts up is you'll get two big metabolic boosts throughout the day rather than one. Likewise, since many of the anabolic hormones are released right after a workout, you'll also see a jump in concentrations of these in the body on this setup.

You just have to watch that you don't cross the line to where you are overtraining, otherwise these hormones will actually decreases.

In one study that was published in the International Journal of Sports Physiology and Performance, researchers looked at the effects of twice a day training compared with once a day training.

After the test was finished, the results indicated that both groups were the same for all training measurements except for the fact that the twice-daily training group had a greater percentage change in isometric knee-extension strength, neuromuscular activation, and testosterone concentration than the once a day training group.

So what this study is suggesting is that while you may not necessarily see outstanding strength increases simply by moving over to a twice-a-day workout there are still some indirect benefits, one major one being higher testosterone levels.

Moving on to the cons side of things, there are a few important facts you should consider before jumping onto a program like this.

First, and probably most importantly, twice a day workouts can be quite draining on the Central Nervous System. Normally it is not recommended that you perform more than two or three weight workouts in a row during the week because it will be difficult for the CNS to recover from this.

Therefore, if you start performing twice-a-day workouts and attempt even two days in a row of such training, you could really be asking for trouble.

A select few individuals may have recovery systems that can handle such a thing, but they are far and few between. You're going to be best off, regardless of whether you're choosing to break a workout up or perform a lower body workout in one session and an upper in the other, to take one day off after a training day.

At the very most you could attempt two days in a row if doing a single workout split, but make sure you're getting good quality rest on that third day off.

Also monitor how you are recovering; if you notice that over time you're actually lifting less weight on the bar, then that's a clear signal that you could be verging on overtraining. 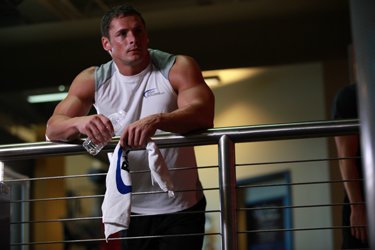 Click Image To Enlarge.
Monitor How You're Recovering And Be
Aware Of Any Symptoms Of Overtraining.

The second drawback to this approach is that you're really going to have to monitor your nutrition. While post-workout nutrition is always an important aspect of any workout program design, when you're planning on twice a day training, it becomes paramount that what you eat between the sessions is well planned out.

Failing to eat properly could result in a disastrous second workout, so there's not much room for error. If you have difficulties sticking with a pre-planned meal plan and getting in at least 2-4 solid meals before that second workout, this type of setup may not be a good idea for you.

Finally, the last con to twice-a-day workout training is scheduling itself. If you lead a busy life, getting into the gym both in the morning and the evening could be quite the challenge.

If you're planning on doing an upper-lower split over the course of a single day with the next day off, then missing your second isn't such a big deal since you can just perform that workout on the scheduled off day, but if you're breaking a single workout up into two pieces and miss it, you're basically missing out on half of what you had planned to do.

So keep these points in mind as you make the decision of whether this type of training is right for you. Some individuals will really thrive on such a setup while others will do much better with a more traditional approach.