8 Unusual Arm Exercises You Have To Try!

So you want to increase your arm size by next month rather than next year? Great! I want you to do a few things:

Once you've got those steps down, you're ready to step into the gym for the best arm thrash of your life—but not until then.

Now let's meet the movements that are going to help you add size where it matters most.

Constituting two-thirds of your upper-arm development, the triceps typically demand more volume than biceps do. In this age of rope press-downs and dumbbell kickbacks performed on Swiss Balls, many good old-fashioned triceps smashers have fallen by the wayside. Triceps typically respond well to all forms of extension exercises involving dumbbells, which allow for a greater range of motion compared to barbells.

The exercise forces you to work against gravity, as the shoulder joint stabilizes the upper arm. While it can be done with a barbell, this dumbbell version with palms facing in can isolate the triceps more effectively to build more mass.

Start by lying on a bench with your arms extended forward and your palms in. Slowly lower the dumbbells until they nearly touch your forehead. Pause for one second and then straighten arms and flex the triceps. It's important here to keep the elbows in a fixed position and control each dumbbell through a full range of motion for maximum effect.

This heavy overhead extension targets an oft-neglected region of the triceps. It won't be easy. So many people avoid doing it, and suffer incomplete development as a result. 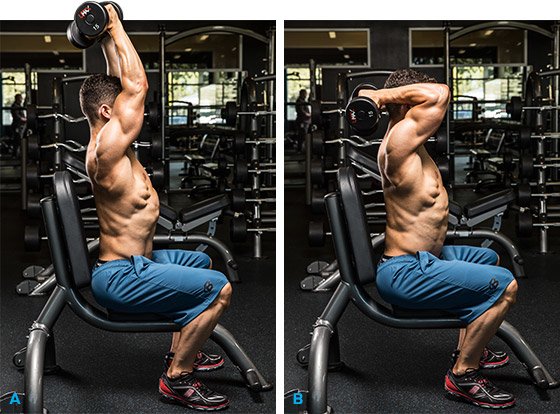 While seated, hold dumbbells with an underhand grip—as if performing a biceps curl—and extended your arms until the dumbbells are overhead. Maintaining a straight back, slowly lower the dumbbells to your upper traps until you achieve 90-degrees of flexion. After a moment's pause, flex your triceps to raise the dumbbells back to the starting position. Be sure to keep your shoulders back and avoid letting your elbows fall forward.

Deemed potentially injurious and less beneficial than other moves, parallel bar dips have been swept under the rug. However, when correctly performed, they can stack more mass on the back of your arms due to their ability to overload all three triceps heads. To perform this move safely and correctly, hang between two parallel bars and use your triceps to push up until the arms are almost straight (not to complete lockout). Slowly lower your body, keeping your elbows tucked in to your sides and legs behind your body, until the upper arms run parallel with the floor. You know you're on the right track when you form a 90-degree angle between the upper arms and forearms. 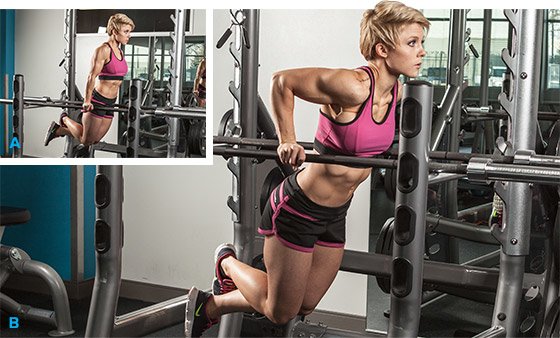 The high visibility of impressive biceps commands respect and conveys a respectable degree of upper-body power. Although they are beauties to be admired, the volume of work is often overstated. Because they already receive indirect tension from other upper body training, 2-3 movements per session for 2-3 sets of 8-12 reps each is ample for maximal recruitment. Add these three rather obscure movements to have your biceps reaching new developmental "peaks."

The biceps ladder is a great movement for extending the time under tension while enabling maximal contractibility of both biceps heads. It also emphasizes the negative part of each rep to promote more muscle micro trauma (and subsequent growth) compared to other movements. 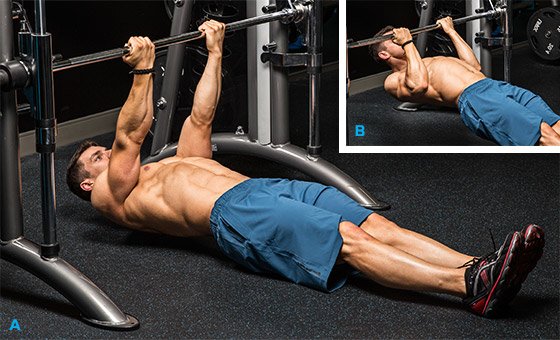 This movement is best performed on a power rack or a Smith machine. Set bar at a level low enough for you to fully extend the arms, with your back just clear of the floor. Begin by grasping the bar with an underhand grip, arms fully stretched; then contract your biceps while curling your upper body to the bar until it touches your forehead. Squeeze hard at the top, and then slowly lower back down to starting position. After completing as many reps as possible from this position, raise the bar a notch and immediately complete another set to failure. Continue in this fashion until you reach the farthest notch.

Concentration curls have always been a favorite of people pining for that coveted biceps peak. The cables will allow more tension to be placed on the biceps long head and recruit a greater number of muscle fibers as a result. 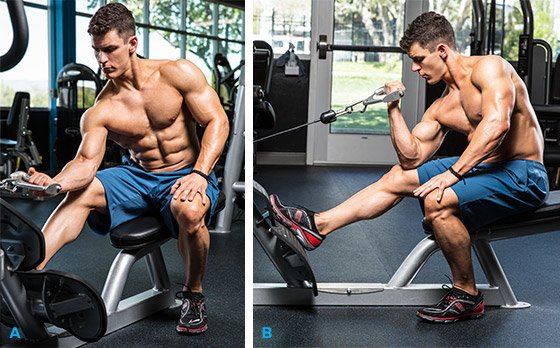 Start by attaching a single handle to a seated row cable. Position yourself seated and facing the machine, then rest the back of your upper arm on your knee and curl weight until the palm almost touches the front deltoid of the working arm. Remember to squeeze and slowly extend your arm to the starting position.

The spider curl is so named after the eight-legged bench it was originally performed on. It was popularized by the first-ever Mr. Olympia winner, Larry Scott, who rocked unmatched biceps. The movement helps to lengthen the long head to promote greater fullness while building the short head to create more biceps width. 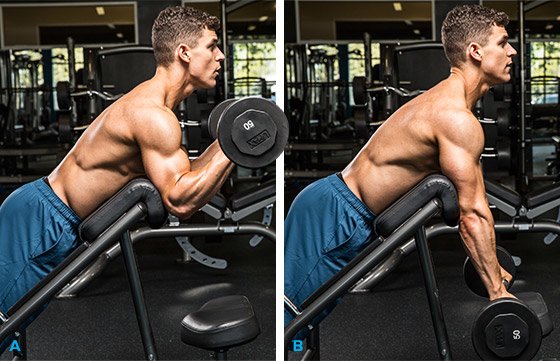 Now comes the fun part! Lean forward on a vertical preacher bench with the triceps pressed flat against the front padding and arms fully extended, thus achieving a nice stretch. Now raise weight to shoulder height by squeezing the biceps and repeat. Simple yet effective!

Aside from titanic triceps and biceps, no other muscle grouping is as routinely displayed as the forearms. Comprising many individual muscles, the forearms are notoriously a stubborn group of muscles to train. Given their involvement in almost all exercises, they need both volume and massive weights to be properly hit. The exercises featured below will have yours larger and more impressive in no time.

Isometric training (static contractions held for 10 seconds or longer) is an effective way to build muscle endurance and provides one hell of a mean burn. When the forearms are subjected to such a stimulus, the results can be truly spectacular. The plate pinch-hold is a classic and easy to perform.

Grasp two weight plates of the same size and resistance at arm's length, between your thumb and fingers. Extend toward the floor and hold for at least 30 seconds, then switch to opposite side. Flatter plates can be difficult to grip so it's worth experimenting with flat plates or hollowed-out plates. 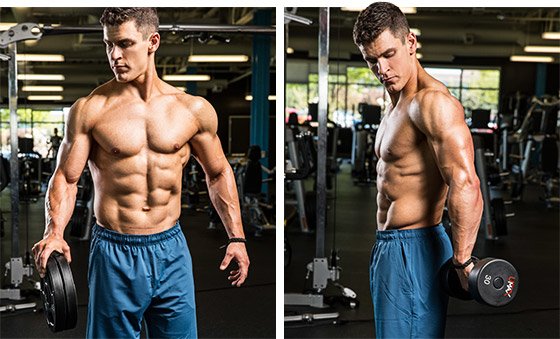 "The forearms are notoriously stubborn to train. They need both volume and massive weights to be properly hit.

The bulk of forearm mass can be found in the flexor muscles situated on the underside of this grouping. Rather than hitting them with variants of the underhand wrist curl, change up your flexor training with behind the back overhand curls. This seldom-performed exercise will pump your forearms to great effect and gains.

Hold a dumbbell with an overhand grip and fully extend your arm to the back of your body a little wider than shoulder width. Keep your arms steady and curl the weight toward your forearm flexor; squeeze hard at the top. Slowly lower and repeat.

Mixing it up for further arm mass gains

If your goal is Hulk-like hypertrophy, the right combination of exercises for the greatest growth stimulus is the key. Remember that all arm movements will build mass, but it is the training style, rep range, and volume of weight lifted that will help determine growth. Try incorporating the above exercises into your arms regimen or even increasing your training volume by adding an exercise to your current routine. Then improved size and shape will be yours forthwith!

Get your guns! Take a page out of Biggie's book and learn how he prepares his biceps and triceps for an important contest. Here's to volume!

NPC competitor Josh Halladay is on a quest for his pro card in 2014. Here's the off-season arms workout that he'll use to add serious muscle to his arms!