6 Strategies To Bring Up Your Front Delts

Boosting your front delts will thicken up your shoulders, and may even boost your bench press as well!

You'd think an article on front-delt training would start near the shoulders, but not this one. Instead, we'll begin a little further south, about chest level, because what you're doing here has a huge impact on your front-delt development.

If you're a guy, you probably never miss a chest workout. You throw in a few sets of push-ups every time you venture into public. And when you're not in the mood for leg day, a little extra chest work is always called for. Declines, inclines, flat bench—you do them all.

You see, the front (anterior) delts are recruited into every chest-pressing action, especially incline movements. As a result, your front delts are probably already well developed along with your pecs.

Balance among the three delts heads—front to rear—is important for more than symmetrical physique development. When your front delts overpower the others—perhaps because you skip a few too many back workouts—your shoulders pull forward, giving you a hunched-over posture. Sports-medicine physicians will also tell you that you're at a higher risk for developing rotator-cuff injuries because of the imbalance in your shoulder musculature.

So assuming you're keeping your eye on maintaining balanced shoulder development, we'll now embark on some strategies to bring up your front delts should they be lagging. Heck, you might even find that building them up will also boost your bench press!

Train your front delts twice over your split

The first strategy to consider when bringing up a lagging body part is to simply train it more often, say twice over the course of your training split. After about 6-8 weeks, the increased frequency can stimulate greater muscle growth; go longer than that and you risk overtraining.

Considering the role of the front delts on chest day, doing them twice over the course of your split requires some forethought. You don't want to construct a split that trains chest on Mondays, shoulders on Tuesday, and triceps on Wednesdays. A number of multijoint triceps exercises, like close-grip benches, weighted dips, and the triceps dip machine, engage the front delts to some degree. Hence you'd be training the front delts on three consecutive days. 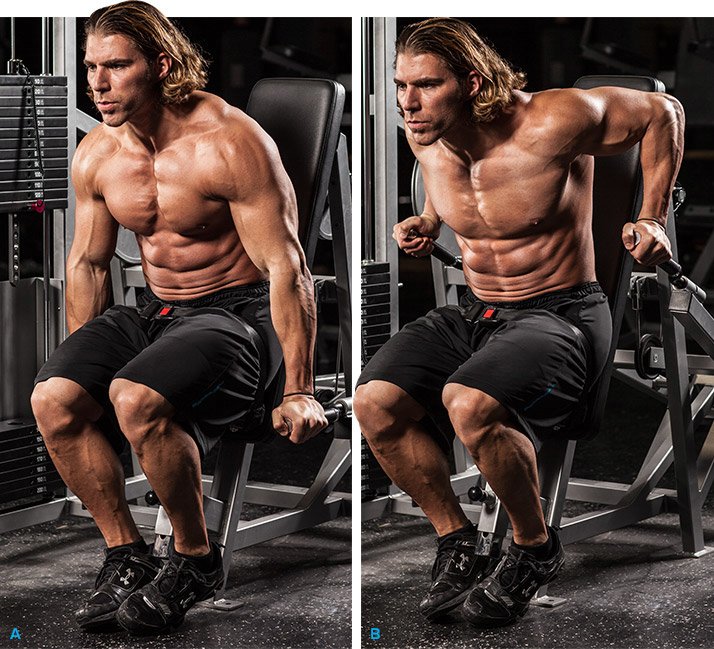 
To allow at least 48 hours before hitting a particular muscle again, construct your split so that pull, leg, or rest days fall in between your push-day workouts.

There's no reason you can't use your chest workout as a launching point for one of your two shoulder sessions. Think about it: If you do two distinct shoulder workouts over the course of your split and a separate chest day, you'll end up with three sessions that target the front delt, which is probably a bit too much work.

If you decide to simply add some front-delt work after your chest session, a few single-joint movements consisting of different kinds of front raises might be all the extra work you need.

Pick a shoulder press that also works the anterior delts

Just about every shoulder workout starts with an overhead press, a multijoint movement that allows you to push heavy weights because multiple joints are working. Do these exercises first in your workout when your energy levels are highest. 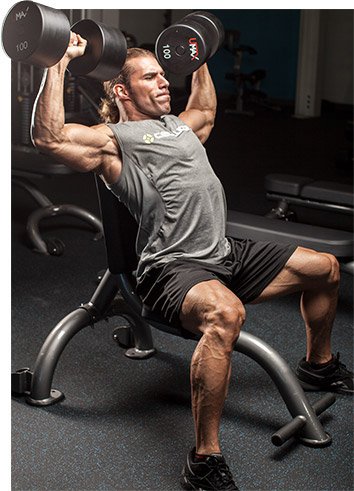 Since we're focusing on the front delts, choose a version of the overhead press that puts a bit more stress on them. How do you know? Simple—it's all about upper-arm position relative to your torso. Consider that when you do dumbbell overhead presses with a pronated grip, your elbows point straight out to your sides. When your upper arm works in this lateral (side) plane, the middle delt is positioned to undergo maximal contraction. However, when your upper arms pull somewhat forward, it's a sign that the anterior delts are getting a greater share of the workload.

Exercises that allow your elbows to come forward include presses in which the bar is in front of your head, not behind it. You can even try it out and observe the difference with a barbell: Do one rep in front and the other behind. Watch where your upper arms travel—out to your sides or slightly forward. That's your cue.

Arnold presses engage the front delts better than other kinds of dumbbell presses because your arms start in front of you. Machine overhead presses differ by manufacturer, but if you keep an eye on the direction of your upper arms, you can easily pick out whether you're getting much contribution from the front delts.

Choosing the best movement is half the battle; selecting the appropriate load is the other half. Early in your workout, when you're fresh, challenge yourself by using a moderately heavy weight for sets in the 6-8-rep range.

Over the course of your delt workout, you can also use relatively lighter weights for higher reps that emphasize the front delts, but you'll want that strength stimulus early, and that means going fairly heavy.

You're most likely already doing a single-joint exercise for each delt head in your shoulder workout, so the only change here is to do that move right after your presses. Your energy levels are a little higher and you'll be able to push just a bit more weight or do more reps.

You may be familiar with the idea that front raises are the movement of choice for targeting the anterior delts. Front raises are quite simply a movement in which you raise your extended arms directly out in front of you. 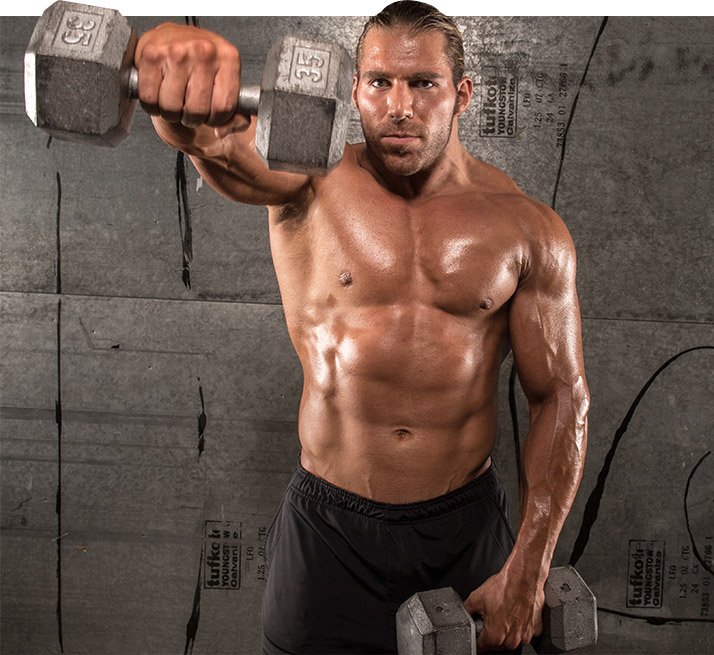 Front raises can be done a number of ways: with a barbell, with one or more dumbbells, with cables (D-handle, straight bar with a revolving sleeve, rope), and even on some machines.

While that's simple enough, there are a couple of points worth considering when doing this movement:

Front raises can be done a number of ways: with a barbell, with one or more dumbbells, with cables (D-handle, straight bar with a revolving sleeve, rope), and even on some machines. You can do any of those variations seated or standing. In general, a standing movement allows you to use a bit more body English, which can help you get past a sticking point and allow you to go a bit heavier.

Be careful of going too heavy with single-joint moves, because of the increased pressure on the elbows. Choose a weight in which you can do at least 8 reps with good form; don't go any heavier than that.

Add another movement that targets the front delts

A typical shoulder workout consists of one single-joint movement for each of the three delt heads, but there's no reason you can't do another for the anteriors. While the movement itself doesn't change much—kinesiologists call it shoulder-joint flexion—you'll want to make it just different enough that you're not simply repeating the first front-delt move.

One way to do that is by choosing a different piece of equipment, which alters the muscle-recruitment pattern, albeit slightly. You can also switch from a standing to seated movement, which better isolates the muscle because you can't generate momentum as easily. It will be harder!

Besides changing the exercise angle, you can also adjust the relative intensity. So if you're doing the first front-delt movement for sets of 8 reps, do the second for sets of 10-12 reps. This relatively lighter weight hits the muscle fibers in a slightly different way, resulting in greater overall muscle growth.

Reap the benefits of training past failure

If you aren't taking some of your sets past failure, you're missing an opportunity to stimulate further muscle-tissue breakdown. Of course, these are the reps that are the most uncomfortable—even painful—so you've got to embrace the burning feeling deep within your front delts.

If you've got a workout partner, take advantage of doing forced reps in which he provides just enough help on the concentric contraction to get you over the sticking point. With his help, you can probably do a few extra reps past failure. 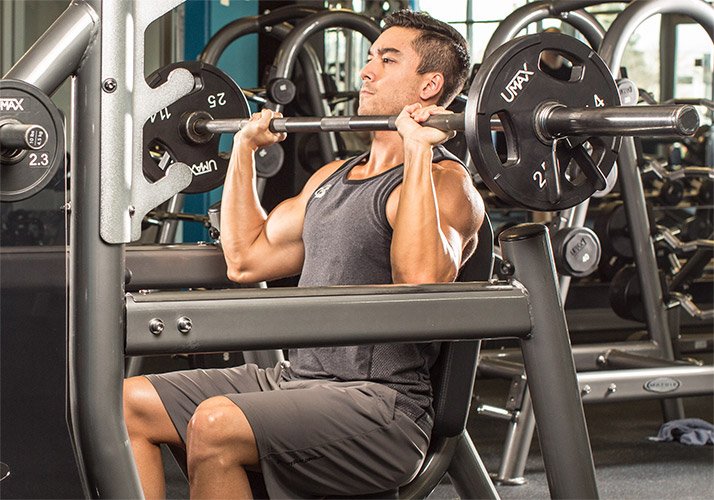 If you're training on your own, you can engender a wicked muscle pump by doing dropsets.

Negatives are another powerful technique to use with a partner. Here, he helps you lift the weight, and you very slowly lower it onto your own back to the start position. A negative rep can take as long as five seconds; keep going until you simply can't control the speed of the descent.

If you're training on your own, you can engender a wicked muscle pump by doing dropsets. Choose a weight and take it to muscle failure, but instead of dropping it and ending your set, quickly reduce the load by about 25 percent and immediately continue on to a second point of muscle failure.

Save any high-rep sets that pump the front delts for the tail end of your workout. Here, you can combine a single-joint front-delt movement with an intensity booster. Keep your rest periods short; you've got nothing to save any strength for.

Chances are that you have a favorite front-delt move you like to regularly include in your shoulder workout. The problem is, there's that nagging diminishing-returns principle that essentially says you get less and less out of a particular exercise the longer you do it.

Variety is required to help ensure your body doesn't completely adapt to a movement. Consider some less-than-conventional ways to work the front delts, which may be novel enough to encourage new stimulus for better overall growth.

Barbell raises done while you're lying against an incline bench—either supine or prone—change the range of motion and ensure you can't use momentum, which makes then particularly difficult. Or try this old-school reverse-grip version Canadian amateur Carl Cheung does for his front delts. And there are over 100 versions in the Bodybuilding.com Exercise Database.

Doing a lot of chest work may have given you a head start on your front delts, but clearly there are a number of other ways to bring them up. Incorporate one or more of these ideas in your shoulder training to bring your fronts to the forefront.