6 Power Pairings For The Lower Body

Heavy weight isn't the only way to make lower-body exercises harder. A little workout ingenuity from Ben Bruno can give you just as much muscular stimulation with less strain on your joints!

We all know who the major players are when it comes to building the posterior chain: deadlifts, hip thrusts, squats, and Romanian deadlifts (RDLs). I would also add single-leg RDLs to that list. Getting strong on these exercises is the ticket, but does every set have to be eyeball-bleeding heavy to qualify as strong? Not if you want to be able to see the TV tonight.

Going too heavy too often on the major backside builders can be tough for many people for a number of reasons, first and foremost being the stress they can put on the lower back. With that in mind, it's often important to find ways to train these exercises in ways that allow you to reap the benefits without the need for such heavy loads.

One such way to achieve this is through strategic exercise pairings that work synergistically to maximize the training effect. Here are six pairings that really pack a punch for the posterior chain. 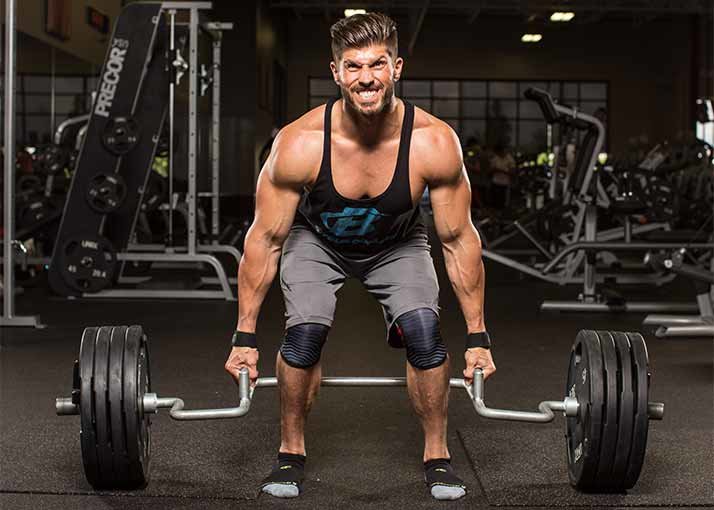 Going too heavy too often on the major backside builders can be tough for many people for a number of reasons, first and foremost being the stress they can put on the lower back.
1

Start by performing 5 single-leg RDLs, then go straight into 5 split-stance RDLs, and finish up with 5 long-stance split squats. Perform all three exercises in succession without resting or putting the bar down.

All three of these exercises are great for shaping and strengthening the posterior chain on their own, but when performed in this sequence, they act as a great mechanical dropset; the load stays the same, but you increase the base of support as fatigue sets in, allowing you to really blast the glutes.

The offset nature of the landmine further increases glute recruitment, and as an added bonus, you get some solid work for the arms and grip, giving you plenty of bang for your buck.

One potential issue for some lifters—particularly stronger guys—is that once the weight gets heavy, grip strength can become a limiting factor. If that becomes the case, feel free to use wrist straps, but refrain from doing so until it's necessary. Don't use straps as a crutch from the start.

Skater squats and reverse lunges are actually very similar in terms of the movement pattern and the muscles being worked, but skater squats are significantly harder due to the greater stability demand (your back foot should not come in contact with the floor, only your knee). Furthermore, the limiting factor with skater squats is usually balance, not strength. This combination works really well because you do the skater squats first while you're fresh. Once you fatigue and it becomes tough to balance, you go right into the reverse lunges to finish off your legs.

Start by doing 6 landmine single-leg RDLs on each leg, then go directly into 12 regular landmine RDLs to complete the mechanical drop set.

I really like landmine single-leg RDLs, but for a lot of clients the limiting factor is often grip strength and/or balance. By performing this mechanical dropset, you get the benefits of the single-leg RDLs before using the bilateral RDLs to further tax the posterior chain without having to worry about grip strength or balance.

You don't have to use as much weight as you normally would for the bilateral RDLs, because you're already fatigued from the single-leg RDLs, meaning you can work the glutes and hamstrings with far less stress on the lower back.

Using the landmine for RDLs can also serve as a great teaching tool for the hip hinge. The biggest problem most people have with the hip hinge is bending the knees and shifting the weight forward, but the arc of the bar when using the landmine ensures a good posterior weight shift and forces you to keep your weight on your heels.

Perform a single set of 8-12 RDLs while facing a bench. After you've completed the set, put the bar down in front of the bench and go right into a set of 8-12 barbell hip thrusts.

This is an awesome pairing from both a logistical standpoint and a training standpoint. It works well because you don't need to hog a lot of equipment, and you don't even need to change the weight on the bar. Most people typically hip thrust more weight than they use for RDLs, but doing them right after RDLs without resting makes it significantly harder and ends up being just the right weight.

If the hip thrusts aren't as challenging, do them hands-free to increase the difficulty, as I recommend in "Up With Hip Thrusts: 7 New Variations." Interestingly, a lot of clients report that they feel the hip thrusts working their glutes even more in this pairing as compared to when they do them alone, even though the weight is less.

Perform a deficit trap bar deadlift followed by an RDL, and alternate in that fashion for the duration of the set. I recommend 4-6 of each per set for a total of 8-12 reps.

The trap bar is an extremely versatile tool, allowing you to perform a squat pattern, a pure hip hinge like an RDL, or a traditional trap-bar deadlift, which is a hybrid squat/deadlift pattern. Both squats and deadlifts are great for targeting the posterior chain, and here you'll do both at the same time.