The deadlift is a technically challenging move to learn, but it has great carryover to everyday activity. Here are 6 common technique errors to avoid so you can lift from the ground like a pro!

Pick up your kid. Empty the trash. Carry a sofa. There are any number of heavy objects on the ground that you need to pick up. You do these kinds of activities all day long, which makes the basic deadlift one of the most functional movement you can do.

The deadlift is far from just a back- and grip-builder. It forces virtually every muscle in the body to sequentially work together and is unsurpassed for building intramuscle and intermuscle coordination.

Quite frankly, nothing builds the posterior chain—the backside of your body, from the calves all the way to the traps—like the repetitive deadlift action of bearing and moving a massive load. But when you combine heavy weights with a technically challenging move, things often go wrong in a hurry!

If you're new to deadlifting, you might want to start with How to Deadlift: A Beginner's Guide. However, if you've been deadlifting for a while and want to improve your technique, here are six common blunders people don't commonly talk about—and how to fix them!

Blunder 1 Turning the Deadlift into a Full Squat

The deadlift is not a squat with the bar in your hands, contrary to the advice doled out by Internet trolls and arm-chair academics. If you must compare the deadlift to the squat—and comparisons abound—it's more of a half squat than a full squat.

Start the deadlift in approximately a half-squat position—yes, there will be some individual variance, but you shouldn't squat up a weight from the very bottom of the hole—with your shoulder blades over the barbell. If you start too low, the barbell will end up too far in front of your body, which isn't good for your back, and put your leverage in a much weaker position.

Don’t descend into a full squat when deadlifting. To keep the arms straight you’ll have to push the bar well out in front, affecting your center of gravity. When deadlifting correctly, it’s more of a half squat.

To get a sense of this concept, it's a good idea to watch videos of lifters doing the movement correctly. Here's one of my clients, Brandon Cass, deadlifting more than 900 pounds at a bodyweight of just 220:

This video shows Brandon's heaviest attempt as well as several reps. Pay particular attention to the degree of bend in Brandon's knees at the bottom. He's not full-squatting a weight from the ground. When done right, the deadlift looks more like a half squat.

Stand up. From a stationary position, I want you to do your highest possible vertical jump; don't think about it, make it natural. This vertical jump foot position at takeoff is a fantastic starting point to find your strongest deadlift stance.

Generally, this will be in the neighborhood of hip width; if you go much wider, your legs will block your arms when you grip the bar. If your feet are too wide, this will put your arms at an angle, making the movement feel unnatural and increasing the distance you must lift the barbell.

Rarely do I see a stance too narrow in the gym or at powerlifting meets, but in an extreme case either way, the sacrificial lamb will be progress. 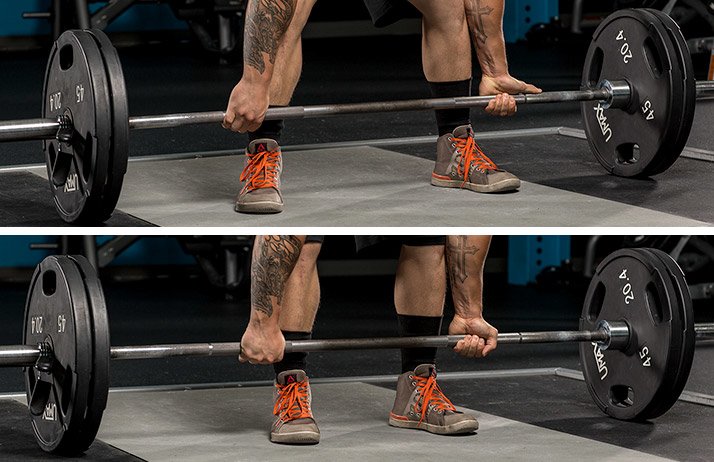 A hip-width foot position is about right, with your toes angled slightly outward.

Any able-bodied male under the age of 50 (barring injuries), with a couple years of consistent training, can deadlift 315. No one on earth does strict curls with this kind of weight. Bottom line, you aren't going to deadlift big if you try to lift with bent arms, pull with your biceps, and "curl" the weight!

The most common serious injury associated with the deadlift, believe it or not, is biceps tears! Thankfully, this is very easily prevented: Don't deadlift the weight with bent arms!

Now that you've been warned, if you do deadlift with bent elbows, the weight will autocorrect and force your arms into extension. The best-case scenario will be elbow pain; the worst will get you acquainted with your local orthopedic surgeon because of a biceps tear.

The solution is to pull with your arms fully extended, which isn't only safe, but decreases the range of motion you must lift the barbell. As my brother Noah Bryant always says, "Your arms are ropes and your hands are hooks. Keep your elbows locked while deadlifting." 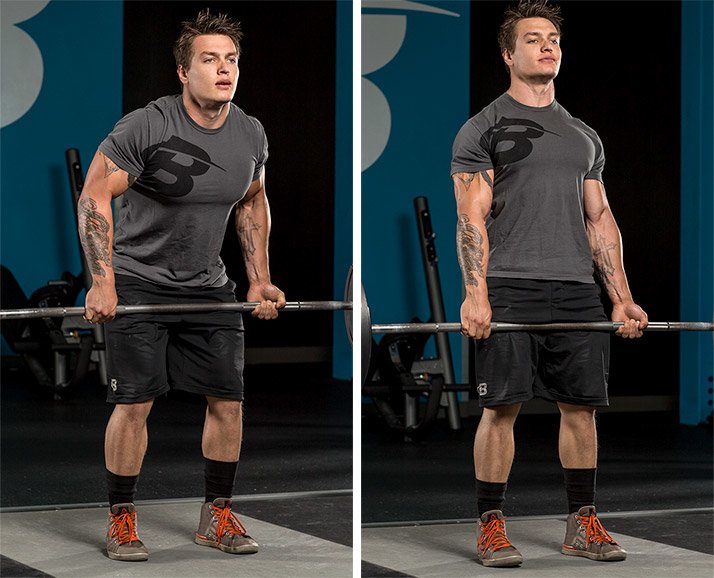 Your arms should remain straight throughout the movement. If they’re bending, you’re more likely to injure your biceps.

Blunder 4 Leaning Way Back at Lockout

Overzealous powerlifters oftentimes lean back as they lock out in training and competition, to show control and dominance of the weight. This is totally unnecessary.

For powerlifters, the competition rule is to lock out the knees and hips while standing fully upright. When a powerlifter leans way back, guess what happens to his knees? They actually unlock. Smart judges catch this, disqualifying the lift. Save yourself the despair and don't excessively lean back.

To add injury to insult for anyone who deadlifts, hyperextending the lower back while locking out a deadlift can cause a host of lower-back injuries like herniated discs. In the name of safety, efficiency, and performance, lift the deadlift to a locked, fully upright position—glutes flexed, hips thrust forward—with no excessive backward lean. 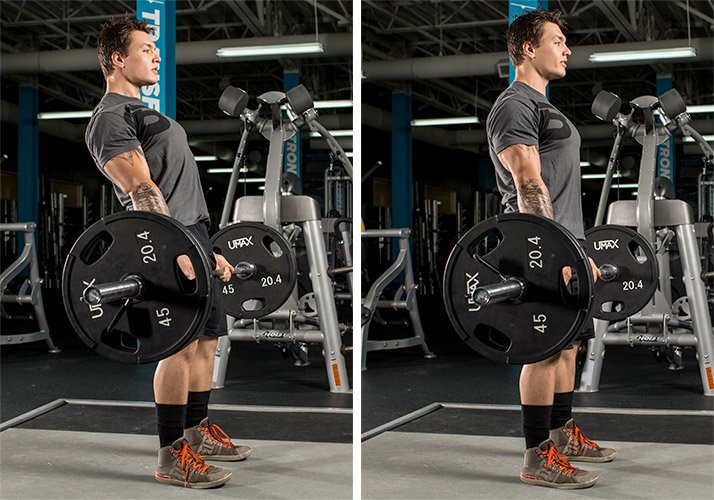 Watch out for excessive backward lean, which is unnecessary and can injure your lower back.

Save your tennis shoes for the court! Most tennis shoes have compressible soles. When you're deadlifting heavy, this leads to excessive instability. If you wear thick-soled trainers right now, simply changing your shoes—or removing your shoes—will immediately increase the amount of weight you can lift.

Forget about thick air soles and expensive sneakers that can reduce stability. The closer your feet are to the floor, the better.

Hardcore deadlifters don't make this mistake, but it's incredibly common among less-experienced deadlifters who've never been coached properly. Instead of squatting too low, as discussed in the first blunder, here a lifter bends over instead, barely breaking at the knees. This technique is closer to a Romanian deadlift, which is an exercise for the glutes and upper hamstrings. While it's a kind of deadlift, it's a single-joint move from the hip, and is not to be confused with a regular deadlift.

You've got to descend into a half squat, not simply bend over. While doing RDLs is safe, you won't get the benefits of the multijoint deadlift. And with RDLs, the plates should never touch the floor between reps. You want to keep the tension on your hammies and glutes, after all.

If you just bend over instead of going into a half squat you’re doing a Romanian deadlift, a single-joint exercise for the upper hams and glutes. You don’t get the full benefits of the conventional deadlift.

Go Forth and Deadlift

Heavy deadlifts will put muscles on places you didn't even know existed, and they'll help build functional strength. Avoid these common mistakes and watch your deadlift soar! If you're still having trouble getting your technique right, investing in a coach is one of the best investments you'll ever make.