Don't just work for abs that look strong. Set your sights on a bodyweight strength goal like a front lever or dragon flags, and build abs as strong as they look!

A buddy of mine once worked at a gym where one particular personal trainer was notorious for showing off his abs to gym members as a way to solicit business. It was a bold marketing strategy that worked surprisingly often (that it ever worked is pretty amazing to me). Though this guy did have a great looking set of symmetrical abs, it goes to show how fixated mainstream culture has become on the coveted six-pack.

To most Americans, a defined midsection is synonymous with strength and vitality. It's no wonder abdominal training has become the hottest topic in modern fitness. While you could try signing up for a fancy gym and hiring a personal trainer, or buying one of the fancy contraptions that you've seen in late-night infomercials, none of those things will really deliver you the abs of your dreams. No matter what, you still have to do the work.

You can get an amazing abdominal workout with nothing but a basic pull-up bar, the floor beneath you, and your own bodyweight. And you don't even have to do a single crunch!

The movements here are far more difficult than crunches, but that's a good thing. It means that rather than setting a purely physique-focused goal, you can use the movements themselves as goals, and gauge your progress by how you advance through the progressions leading up to them.

I can pretty much guarantee that once you're able to bring your toes up to the bar for the first time, your abs will be stronger than they've ever been before.

To understand why certain exercises are more worthwhile than others, you must first understand the role that your abs play in the musculoskeletal system. The abs function primarily as stabilizer muscles; they keep your torso aligned while you are standing, walking, or doing anything other than sitting or lying down.

Think of your abdominals as a bridge that connects your upper body to your legs. Imagine a primitive bridge made of some rope and a few wooden planks. Now imagine a modern bridge made of steel and concrete. Which one would you feel more confident crossing?

The following exercises can give you a midsection as sturdy and memorable as the Brooklyn Bridge.

The plank is a great introductory exercise for beginners, but more advanced trainees unfortunately often disregard it before fully mastering it. This is a shame, because it lays the strength foundation for all of the other movements listed here. Just take a look at a dragon flag or front lever and tell me if you don't see a graceful moving plank.

The plank consists of holding the top position of a push-up, except you are on your elbows instead of your palms. Since you're in a horizontal position when performing a plank, your abs will have to work considerably harder to keep your body properly aligned than when you are standing or walking.

Though the plank is held while balancing on your elbows and toes, it can be modified to suit all fitness levels. Novices can start on their knees instead of their toes, while intermediate level trainees can try lifting up an arm, a leg, or both.

As the angle of the body gets closer to being parallel with the ground, it becomes harder for the trunk muscles to stabilize and maintain form, though having the elbows bent takes some stress off the shoulders and arms.

That's one great thing about the plank: It lets you know where you're weak and need strengthening. For this reason, disregard it at your own peril!

In addition to keeping your body stable, your abdominal muscles must also do considerable work to lift your legs when performing a hanging knee raise or hanging leg raise. The demand on the core is tremendous, not to mention the extra grip work you'll get along the way. 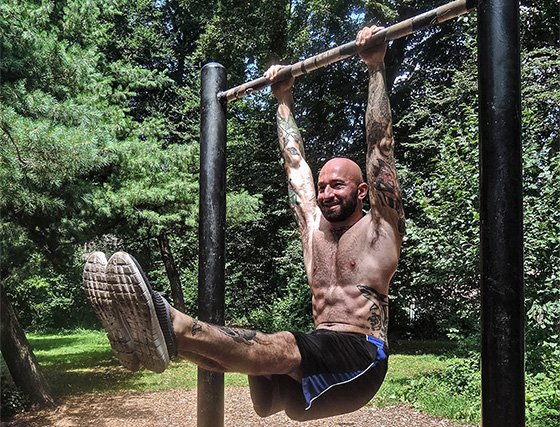 Start out with the bent-knee version and work toward straightening your legs over time, eventually bringing your toes all the way to the bar with your knees fully extended. That's a lofty goal, but one that's worth working toward. In the early going, simply staying in place can be an ab workout all its own. Swinging is a definite no-no!

The L-sit is an intermediate to advanced level move commonly seen in gymnastics. Like the plank, it is often held in a fixed position for a given amount of time. But while it's possible to do an ugly plank and convince yourself it's OK, good luck doing a bad L-sit without toppling over.

To perform the L-sit, begin by sitting on the ground with your legs extended in front of you. Place your palms on the floor right outside of your hips. Squeeze your abs as you lift your hips and legs off the ground while pushing with your hands. Think about pointing your elbows behind you while hugging your triceps toward your lats. If it sounds like this movement works a lot more than just your abs, you're right.

Al and his brother Danny stage workshops and offer teaching certifications in progressive calisthenics. In the next six months, they'll be teaching bodyweight strength in Sweden, Australia,
and Ireland as well as stateside in Minneapolis.

You can start out by practicing with your knees bent, eventually working toward fully straightening your legs. Beginners may find it helpful to practice this move while elevated on parallel bars or push-up handles to allow greater leeway for lifting the legs into position. Find what works for you, and then stick with it and practice regularly.

The front lever is an advanced move that works the entire upper body, but especially the abs. The idea is to hang from an overhead bar and pull your entire trunk and legs into a horizontal position so you are parallel to the ground. It should be a smooth movement, but don't let that trick you into thinking it's easy. 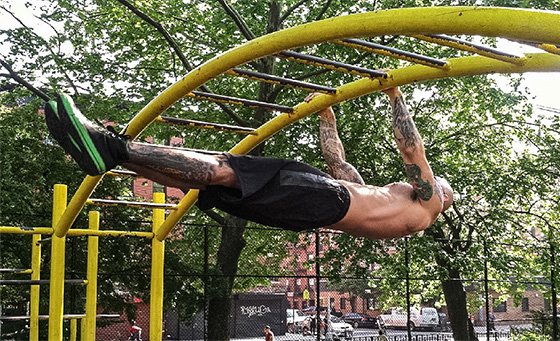 The front lever is an advanced goal that must be worked toward methodically over time. See my full article on front lever training for a full progression.

Though best known as a trademark of legendary martial artist Bruce Lee, the dragon flag has become a popular training tool among many hardcore workout enthusiasts who are serious about core strength.

The dragon flag is typically performed lying face-up on a bench or on the ground with your hands grasping a sturdy object behind your head for support. The objective of the movement is to lift your entire body up in a straight line, stacking it vertically over your shoulders in the top position. 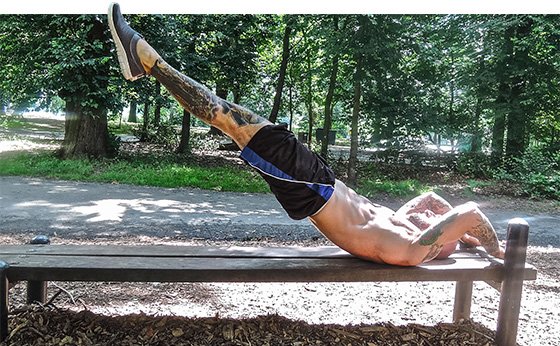 From there, the idea is to lower your body down while maintaining a straight line from your toes through your trunk, repeating this up-and-down movement for reps.

Whether you are a strength training newbie or a sergeant of abs, there are always new challenges to keep your core training fresh and fun. Any time you have to stabilize your torso, your abs get a workout.

This means that progressing toward abdominal strength goals like those listed here can pay off in pretty much everything else you do in the gym and outside of it.

Use the methods presented above or experiment for yourself to find your own unique variations. Have an abdominal strength secret to share? Drop it in the comments!