Advanced bodyweight maneuvers are some of the ultimate strength tests, because trying to cheat will just leave you flat on your back. Meet the front lever, an isometric core massacre that will show you what you’re made of!

People often underestimate how strong they can become with bodyweight exercises alone. To the average person, it may seem like once basic calisthenics like push-ups and pull-ups start to get easy, there's no way to progress without using weights.

Anyone who is well versed in bodyweight training knows this is total malarkey! The front lever is a simple bodyweight exercise that builds tremendous upper-body strength as well as an iron core. It looks pretty damn cool, too. A move regularly seen in gymnastics, the front lever involves pulling your whole body up until it is parallel to the floor, almost like you're floating on air.

Front levers are most commonly performed on gymnastics rings, but you can easily train them on any standard pull-up bar. In either case, both levers and modified front levers can take your pound-for-pound strength to new heights. However, you need to be strong already before you begin even the most basic variations. Before you embark on front lever training, you should be able to perform at least 10 dead-hang pull-ups (ideally more) as well as several full-range-of-motion hanging leg raises.

If you're already there, great! Now meet your next challenge.

The easiest variation on the front lever is the tuck front lever. Hang from a pull-up bar and squeeze your legs toward your chest while rolling your hips back until your torso is parallel to the ground.

After you can hold that for a full minute, the next step is to practice a straddle front lever. The straddle position, though much harder than a tucked front lever, is still significantly less of a challenge than a full front lever. By opening your legs, you change the balance and you also shorten the lever, both of which make the move easier. Additionally, you'll need better than average hip mobility to pull off a decent straddle front lever, so make sure you regularly stretch both your hamstrings and hips.

There are many ways to manipulate the leverage more or less in your favor depending on how you position your legs and hips. Feel free to explore other leg positions, such as the half-tuck front lever. The further you reach your leg(s) away from your torso, the harder the exercise becomes.

When you've gotten to the point where these lead-up variations are no longer challenging, you will be ready to attempt holding a full front lever.

In the beginning, it may be easier for you to start in a tucked front lever position and slowly extend your legs into the full lever, maintaining total body tension the whole time. With practice, you can work toward pulling to the front lever position from a dead hang with your entire body straight.

When performing a front lever, think about squeezing the bar tight and pressing it down toward your hips. Engage your arms and torso, clench your midsection, and squeeze your legs together. This move works the entire body, especially the lats and other upper back musculature. 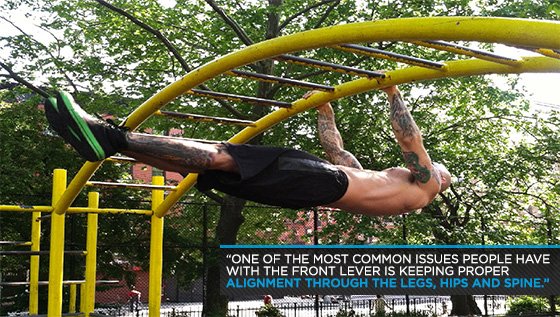 One of the most common issues people have with the front lever is keeping proper alignment through the legs, hips and spine. Point your toes and watch out that your butt doesn't sink; strive for a perfectly straight line from the top of your feet to your neck.

Though the front lever is most commonly approached as a static hold, performing front levers for reps can be a useful tool as you work toward an isometric hold. Practicing going in and out of position is a bit easier than trying to hold the peak contraction.

Keep your whole body tight as you use your arms and lats to pull your body into the lever position, then lower back down to a dead hang and repeat. Since you don't stay in the top position long, this move can help you ease into more difficult variations. You can practice going up and down for reps with a tucked or half-tucked position to vary the intensity. Though some swinging may be unavoidable, try to use as little momentum as possible.

Achieving a full front lever requires serious pulling strength as well as total body control, so working your way up to it can take a long time. Be patient and gradually work through each step before moving onto the next one.

If you find yourself getting stagnant in your progress, take a break from front lever training while you continue to work the basics like pull-ups and push-ups. Then come back to it after a few weeks. A little time off can sometimes give you renewed focus. The front lever is a difficult move; I'm still working on perfecting it myself.