Want Big Biceps? Here's How To Get Them!

Training the biceps is a must. This article will provide an overview of the best exercises available and a full training program and tips!

In bodybuilding everybody wants big biceps, as they are a most impressive area to develop, and given their high visibility and superficiality, signify strength perhaps like no other body part. When someone asks, "flex a muscle" they do not want to see your calves. It is the biceps that are usually requested.

The biceps grouping (anatomically known as the biceps brachii), of which there are two heads (the short head or outer biceps and the long head, or inner) comprise the upper portion of the upper arm and are responsible for elbow flexion (moving the hand toward the shoulder), elbow supination (rotating the palm upward) and shoulder flexion/transverse flexion.

Also associated with the biceps, although not part of their anatomical structure, are the brachialis and brachioradialis, muscles that are situated on the side of the arm between biceps and triceps, and connect the main bicep muscle to the forearm respectively.

Training the biceps will involve training these muscles also, as they allow for greater overall upper arm size, and the illusion of a larger biceps from top to bottom.

To become a bodybuilding champion or just someone who would like to look great on the beach, training the biceps and associated muscles is a must. This article will provide an overview of the best exercises currently available, a full training program and tips to get the most from the methods presented.

Personal experience—through training numerous clients and myself—has shown me that certain biceps exercises are superior to others. The best biceps movements, collectively known as the "mass-builders," are those that provide the greatest stimulus across both the long and the short heads.

Therefore, using the four exercises shown in this article—the standing barbell curl, one-arm preacher curl, incline dumbbell curl and hammer curl (in my experience, by far the best for building massive size)—will help you to achieve your size building goals at a faster rate.

Isolation exercises, such as various cable and machine movements, do have their place, especially as a contest approaches and one wants to etch more detail, or when a bodybuilder has sufficient mass and seeks to create more definition, but for building a good base of solid muscle they are largely unnecessary and it is best to stick with the basics initially to build the best foundation.

In addition to building great biceps size, the basic exercises will also create the type of shape your biceps will adopt (which is largely determined by genetics) as they will stimulate a greater cross-section of the muscle. Here are the best exercises, an explanation on how to perform them and they reasons why they are used. 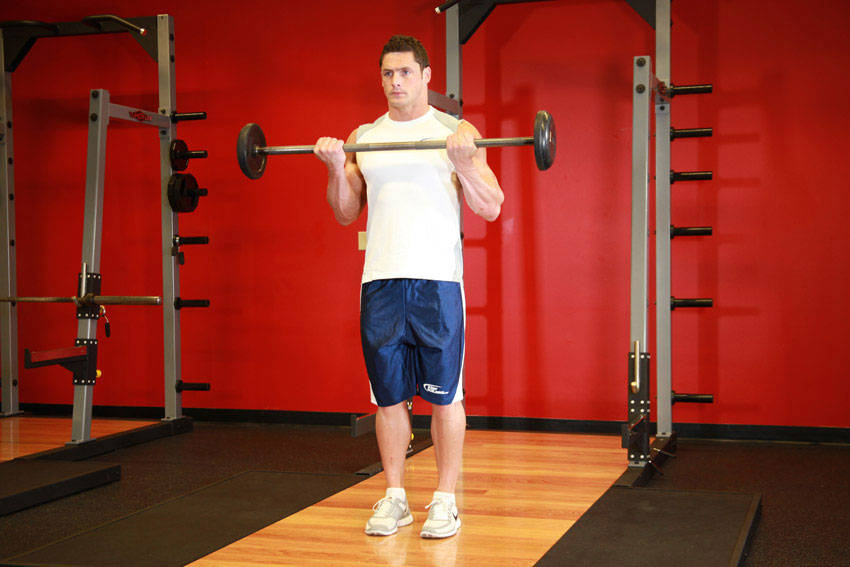 The biceps curl can be performed a number of ways: standing with dumbbells (both hands curling or alternating), one arm resting on inner thigh as with the concentration curl, preacher curl variations (including the one arm version featured in this article) and seated with dumbbells.

Given the main role of the biceps is elbow flexion, the logical movement for stimulating the most amount of muscle in this region is the curl, and the most basic of all the curling movements is the standing barbell version, universally known as the greatest biceps exercise ever. 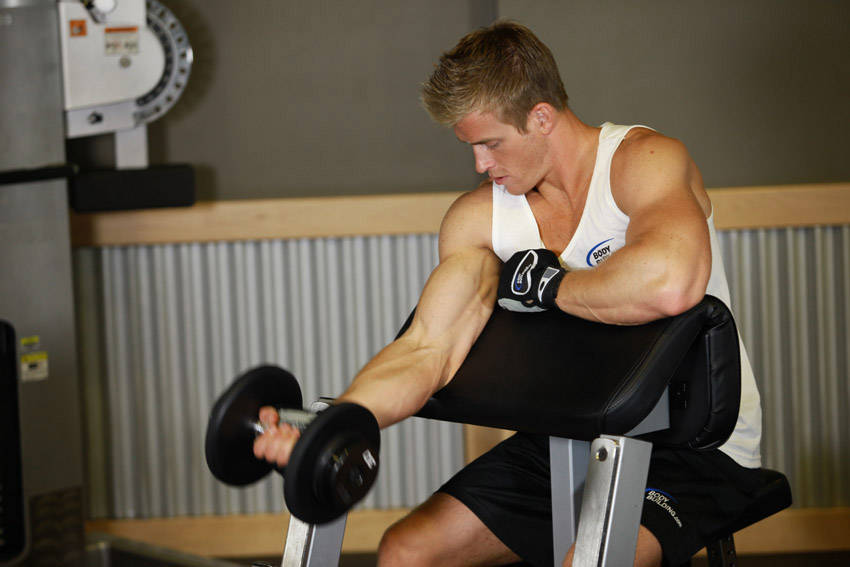 This exercise could be considered an isolating movement as it really focuses stress on the peak (which is found on the short head and is genetically determined) and adds to fullness at the lower portion of this muscle. However, as mentioned it does add to fullness and I have found it to be one the best movements for enhancing overall size. 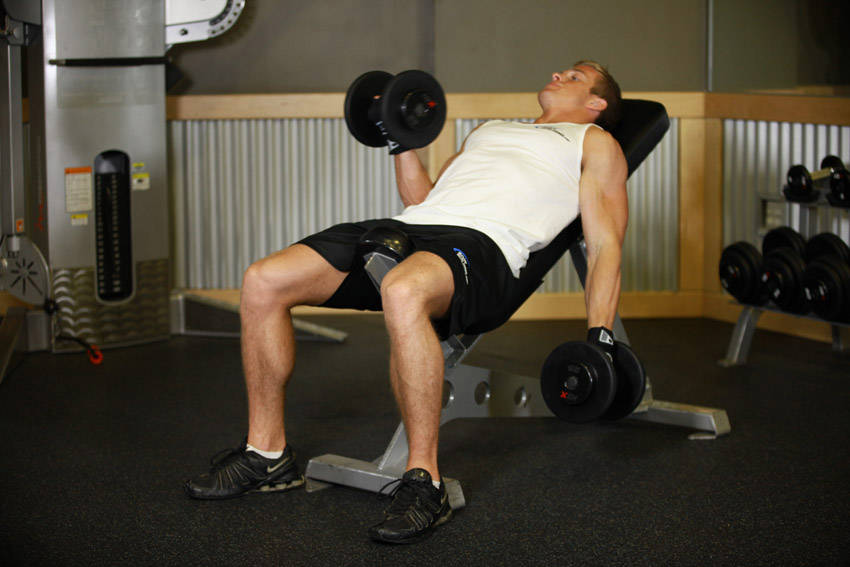 Another good overall mass builder (second only to standing bar curls in my opinion) is the incline dumbbell curl. It allows one to achieve a full range of motion while getting a maximal stretch at the bottom of the movement. The amount of weight used will be less than with the bar curl, but providing the form is kept strict it will produce an amazing pump. 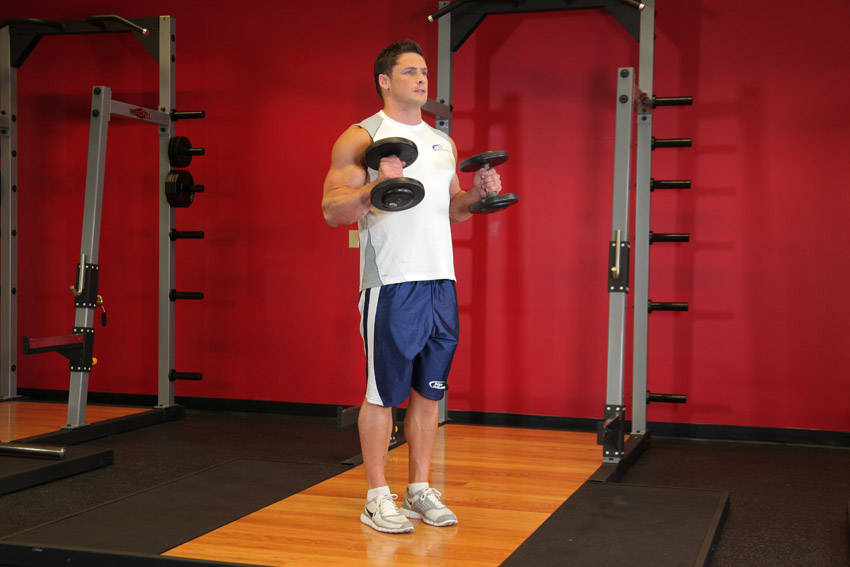 The hammer curl, although not strictly a biceps exercise, will develop the brachialis, lending a greater degree of overall size to the biceps area. The brachialis, the strongest flexor of the elbow, runs along the side of the upper arm and comprises much of the lower biceps area.

It conveys the impression, in those with full development, of a tennis ball stuck under the skin between the biceps and triceps. Developing it to its fullest will help to push the biceps up therefore creating the illusion of a peak, and fill out the lower portion of the biceps, providing overall thickness in this area.

Ensure elbows are fixed at sides throughout the movement, as this will eliminate any shoulder movement, thus placing a greater load on the brachialis.

A hammer curl variation I have found to work well is the alternate version. Simply perform the movement as instructed, one arm at a time. This will allow for a greater focus to be placed on each brachialis muscle.

A Program For Massive Guns

For the past nine months my biceps program, based on the four exercises above, and following similar principals to the ones featured in this article, has produced my fastest results ever. With this routine I managed an increase of one inch on my upper arm circumference, taking my measurement from 16-to-17 inches, an excellent result for someone with 15 years training experience.

The program outlined in this article is slightly modified - I had used my program in the build-up to a bodybuilding shown - to meet the needs of one who seeks primarily muscle mass and cuts, without the extra detail needed for a bodybuilding show. I have used the following program to great success on several bodybuilding clients.

The basic program for one who is in the beginning stages involves training biceps once per week, but the second routine (also featured) requires targeting them twice a week, and can be used by the more advanced lifter.

Program One: Beginner To Intermediate

The following program can be used either on the same day another body part is trained (preferable in the evening, on the same day as back training), or as the only program used on a given day. In both cases the same rule applies: for optimal biceps development train them independently.

This will allow for a higher intensity workout and total focus to be placed on the biceps. Training the biceps before a larger body part will not solve this problem as training intensity for the larger grouping will be diluted, and recovery time for the biceps will be limited.

The two days that comprise this program can be repeated over however many consecutive weeks it takes to gain the desired results in biceps size and shape. Various modifications can be made or the program can be continued depending on the results one is getting. Various intensity techniques are included to further stress the biceps.

On the third set of each exercise use the rest pause method to further stimulate the muscle. Upon reaching failure (usually at the 10th repetition mark), rest momentarily (usually around 15 seconds) before completing another rep. Complete three additional repetitions in this fashion.

This rest/pause method will help negate the oxygen restriction associated with sustained contractions, as it will assist with the removal of various waste products, allowing for the higher recruitment of motor units and additional repetitions.

With one-arm preacher curls, use drop sets on the final set. Upon working to failure, select a lighter weight and complete an additional 15 repetitions, before selecting a final weight to finish the set with 10 repetitions. This method will really push the blood into the muscle for that extra pump to facilitate growth.

Drop sets cannot be done for every exercise as they are extremely taxing and may result in overtraining if overused.

Day two serves as a lower intensity workout to further facilitate biceps growth without contributing to overtraining. Studies have shown that a muscle group will require training once every 3-to-5 days to continue the upward growth trend. However, biceps get secondarily stimulated during back and, to some degree, chest training and therefore require longer rest periods. It is advisable for a beginner to train them only once per week.

The following tips can be used with programs one and two to further enhance biceps growth.

Given the biceps is one of the smaller muscle groups, which receives a lot of additional work every time a person trains back and chest, it is wise to limit training sessions to no more then two per week.

The more advanced lifter could safely do this number of workouts per week, while one session would be recommended for the beginner or intermediate lifter. Six to nine sets maximum of specific biceps work, for any given workout, would be best to prevent overtaxing this muscle.

One major misconception in bodybuilding is that biceps shape can be specifically trained for. The truth is, shape is determined by genetics and specific movements will develop only what ones genetic blueprint dictates. With this in mind I would suggest training for size with the basic movements outlined in this article and stay away from so called shaping exercises, at least during the initial stages (six months to a year).

It is a given that ensuring strict training form (with the possible exception of cheat bar curls) will more fully isolate the biceps and contribute to greater growth. Keeping good technique will also help with injury prevention.

Training biceps on their own (preferably on the same day as back) is a great idea for two reasons: it will enable one to focus exclusively on their development with maximal intensity, and allow for greater recovery time given the workouts will be shorter and larger muscle groups will not limit the intensity applied.

For example, if one trains the biceps directly after back (a standard practice among bodybuilders), there will be residual fatigue in the elbow flexors from all the rows, chins and pull-downs executed. This will significantly limit the training resistance used during all biceps curling movements and therefore limit biceps growth.

To prevent injury and prepare the biceps for high intensity work, it is advisable to stretch for several minutes and complete at least one warm-up set of 15-20 repetitions with a weight of around 50 percent of your working weight.

Keeping things simple is often the best advice for any endeavour. For training biceps it is particularly wise to keep things short and simple by sticking with a plan that works, one that is based on several basic movements, and a list of guidelines that are proven to get results. The programs in this article have been proven successful in building big biceps. Use them to create your own monster guns.