Forget gluteus minimus! Here are 8 strategies to maximize your butt muscles for a stronger squat and deadlift, better athletic performance, and much more!

"Guys train legs; they don't focus on glutes," my editor told me, as he once more shot down my idea for a "Men's Guide to Glutes" training feature.

The truth is, he may have been right—at least once upon a time. Many guys have always had an eye for women's glute training, but my editor pointed out that he'd never seen a reader survey that showed much appetite for men's glute training. But I would have none of it, because guys need to train glutes, even if some of us don't realize it yet.

Sure, ladies seem to notice a fella's derriere in jeans, and firm wins out over flat and squishy every time, but that's not the key selling point here. Quite frankly, muscular glutes will help you squat more, deadlift more, become a better all-around athlete, and go farther on your lunges. You can do leg extensions until the cows come home, but you really can't build big legs without strong and muscular glutes, period.

While every multijoint lower-body exercise works the glutes to some degree because of what's called hip extension, this article will show you how you can engage your glutes to an even greater degree by really maximizing hip involvement. I'll teach you how to add glute-specific exercises to your training, and how adjusting your foot placement and the depth of your squat also play a role in muscle recruitment.

Gentlemen, there's no shame in reading this article. You and your lifts need stronger glutes. It's time to stop hiding your minimal gluteus maximus and train them to the max!

Any leg workout worth its salt starts with heavy squats, and you won't get any argument from me here. The squat is the single-best overall lower-body builder, targeting the quads, hamstrings and glutes. There's no variation that really "isolates" the glutes, but if you're looking to emphasize them, here's a suggestion: Do the type of squat that powerlifters use, which is called a low-bar squat.

The bar is placed a little further down on your shoulders, resting on your rear delts—not your traps—which keeps you in a more inclined position and slightly changes your center of mass. You'll immediately be able to use more weight with greater glute/hip action and less lower-quad activation. There's also less stress on the knees with this version.

Besides starting with a difficult movement, you also want to ensure you're using a challenging weight. After warm-ups, don't be afraid to pyramid up to a few low-rep sets of 6-8, which will also help you increase your strength. On those heavy sets, a good spotter is useful to help you push past previous personal bests with your weight or increase your reps. Don't be afraid to take a slightly longer rest interval between very heavy sets.

You may have seen guys squat on heel boards or plates, but avoid that. It shifts your center of gravity slightly forward, increasing the workload on the quads and thereby reducing it on the glutes. 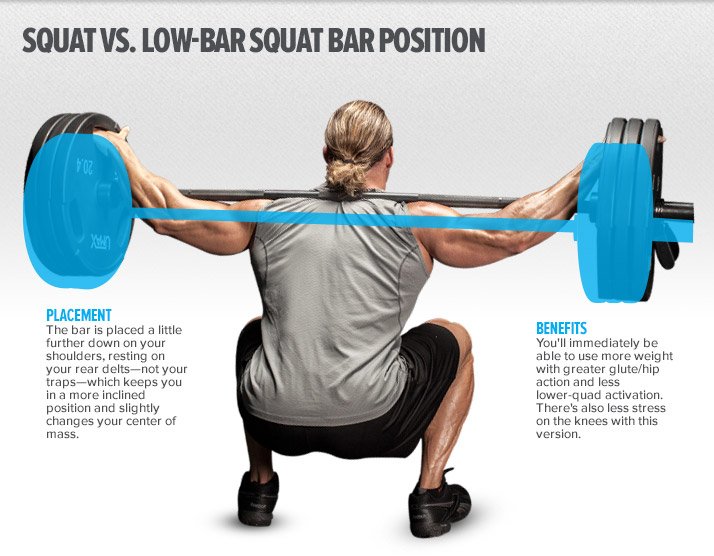 Ever see the skinny guy at the gym who loads up the bar or leg press and descends just an inch or two, apparently impressing himself that he can handle the heavy load? Doing such partial reps shortchanges results, but nowhere more than the glutes.

The glutes and hamstrings work hard to control the rate of your descent, but they really kick in when exploding out of the bottom position. If you're not descending to a point at which your thighs are about parallel with the floor—a knee bend of about 90 degrees or less—the glutes just aren't getting maximal activation. Shallow depth-of-squat moves more predominantly target the quads.

This applies to all your multijoint movements, not just squats, so endeavor to descend to a point as deep as you can in all multijoint lower-body movements.

One goal when targeting glutes is to reduce knee flexion and extension, which lessens the stimulus on your quads. When you place your feet higher on a platform or sled—rather than directly beneath your body—the degree of knee flexion/extension gets reduced, and you're able to better stimulate your glutes.

If you did your first exercise for sets of 6-8, consider a slightly higher relative rep range as you progress through your workout, opting for a weight you can do for sets of 8-10 or 10-12. Employing multiple relative intensities is a great way to increase overall leg development in addition to changing exercises.

Long-limbed bodybuilders have long opted for a wider stance for comfort, but a wider stance also means greater glute activation. That's because this stance allows for greater posterior displacement of the hips.

A 2009 study in the Journal of Strength and Conditioning Research showed that a wide stance had significantly higher levels of glute EMG activation than normal-stance squats (using a load of at least 70 percent of 1 RM).1 Another study conducted at Illinois State University and published in Medicine & Science in Sports and Exercise found that a wide stance of about 140 percent of shoulder width resulted in greater EMG activity in the glutes than a normal stance.2

In sum, kick your feet out a few inches and you'll get a bit more gluteal activation.

You may think lunges aren't as manly as squats, but would you think otherwise if I told you four-time Mr. Olympia Jay Cutler used to finish his two-hour weekly leg assault with walking lunges with 225-275 pounds on his back for 25 steps outside on the blacktop in the 130-degree Las Vegas summer heat?

Lunges can be a great finishing move for glutes because of the degree of hip extension involved, especially when you take longer steps. They range from very simple—the unweighted stationary lunge in which your feet remain in a split position, for example—to very challenging, such as weighted reverse lunges. Hold dumbbells in your hands or a bar across your back to work in your desired target rep range. You can even ditch the weight as you reach failure for a dropset that's sure to get your glutes pumped.

6. Get Creative With Your Glute Exercises

Some glute-specific movements aren't exactly new, but they may be novel for you. Consider the standing hip-extension machine, which simulates the stride a sprinter makes. (On all fours, the version is called a butt blaster.) This movement finished near the top of the list in EMG analysis in a study from Germany.3 A machine movement is ideal toward the end of your workout, since you can simply focus on pushing out as many reps as possible instead of balancing the weight.

Another great option is the weighted hip thrust , which simply requires a bench and weighted bar. Carefully get the bar in position, and be sure to use collars so the plates don't slide off. Otherwise, load it up and go heavy!

One more move that's a real bun burner is the Bulgarian split squat in which your rear leg is elevated on a bench. You can make this exercise even more difficult by holding dumbbells at your side or by using a Smith machine and adding additional plates.

When using a Smith machine, it's absolutely critical to align your body correctly in relation to the bar. You want to squat straight up and down, not bend forward, since the bar's not in the right position relative to your torso.

Many lifters tack hamstrings exercises on to the end of leg day. However, rather than simply doing leg-curl exercises—a movement in which action takes place only at the knee joint—be sure to include Romanian deadlifts.

The hamstrings cross both the knee and hip joints, so a movement like Romanians targets the hamstrings mainly from the hip joint. The emphasis is not only on the upper hamstrings here but the glutes as well, so give them an extra squeeze in the standing position. And be sure to include some kind of leg curl to complete your hamstring workout.

A movement like Romanians targets the hamstrings mainly from the hip joint.

8. Train Legs After a Rest Day

Legs are the single-most demanding muscle group to train because of the degree of muscle mass involved. When your goal is to bring up a particular muscle group, preceding it with a rest day better ensures you'll have the energy to tackle the heavy weights. Your muscle glycogen stores will be topped off when you've eaten well, and you'll be well rested. And don't precede your workout with an extensive cardio session; limit it to just a warm-up to get the blood flowing.