Don't get stuck behind the crowds at the gym when training rear delts! Learn how to substitute multiple variations of a given exercise when you can't get to the equipment you really want.

Training in an empty gym is a wonderful occurrence. You can superset exercises at will, use whatever equipment you desire, and go on the training equivalent of an iron shopping spree! More often than not, however, gyms are packed with people, and it usually feels like they're all queued up behind the exact machine or equipment you need.

Knowing your way around the gym—that is, knowing how similar exercises can be substituted for one another—is especially useful when the gym is crowded and there's someone on every piece of equipment you want. If there's a lineup at your first choice of equipment, that doesn't mean you can't look at option B, or even options C and D.

In fact, while ditching your favorite piece of equipment may seem devastating, it can actually be a blessing in disguise. Knowing multiple exercise variations is actually critical for maximal muscle development. Different equipment and implements target your muscles with unique stresses and angles, which can provide new stimuli for muscle growth.

Barbells, dumbbells, machines, cables, and the Smith machine all have their own advantages compared to one another, and none work a muscle in exactly the same manner. Ultimately, when you include all those types of equipment in your workouts, you work the muscle more completely, and you're less prone to hitting a plateau on any given exercise.

In this article, I'll take you on a tour of rear-delt raises, a single-joint movement for the posterior (rear) delts, and explain seven variations you can use for this core exercise. Each of the seven movements is slightly different, which means your workouts can always have small and slight permutations. If you're stuck in a rut or have reached a training plateau, this movement diversity can really help.

Don't consider this advice specific to the rear delts, though. Ultimately, optimizing muscle growth means knowing how to do a given exercise in multiple ways, and including each variation in your workouts at one point or another. You won't just be a faster bodybuilder in the gym, you'll be a bigger one, too!

This basic free-weight movement is done standing while you're bent over at the hips with your knees slightly bent and lower back arched. It allows you to use a little body English through the knees and hips to keep the weight moving. Bring the dumbbells out to your sides in a wide arc as high as you can, maintaining a slight bend in your elbows. 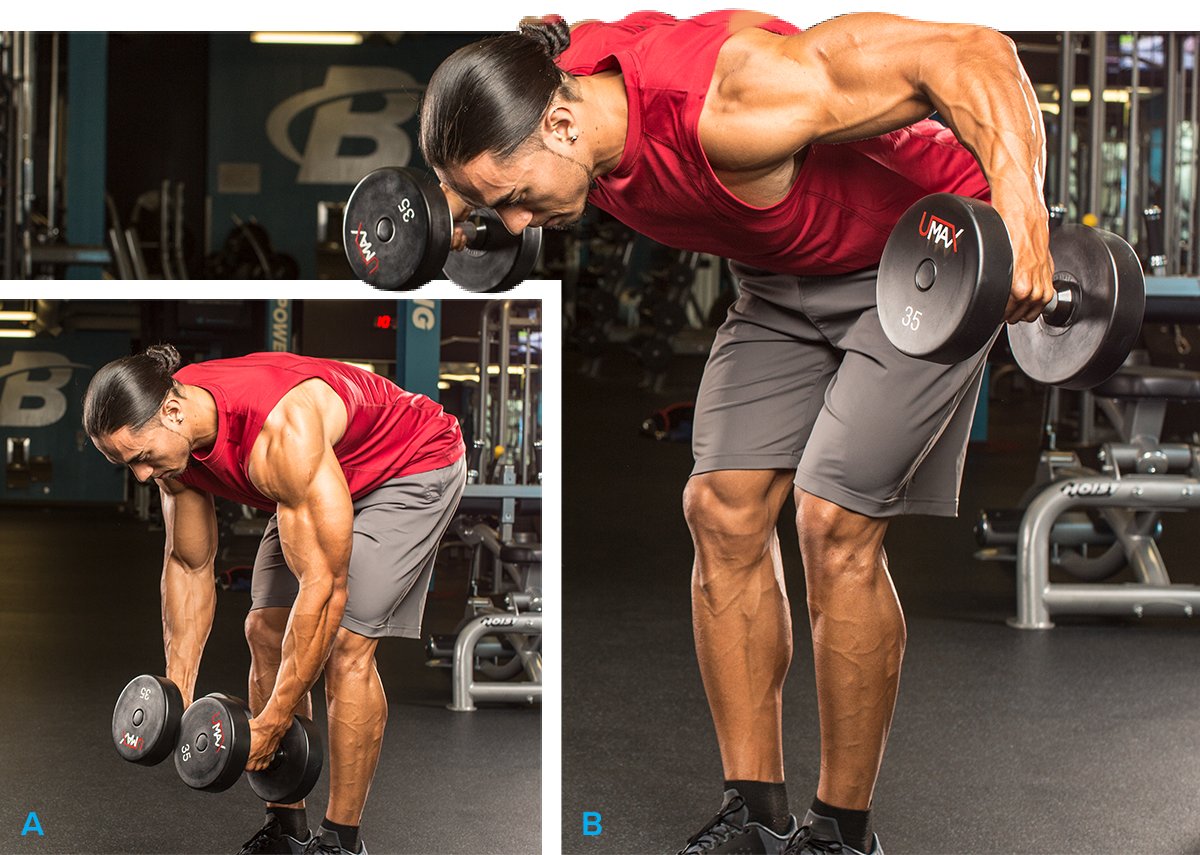 The motion here is the same as the standing version, but when you do it seated, it's much more difficult to cheat, so this move is harder than when standing. You typically have to use less weight because you're unable to generate as much momentum through the lower body. 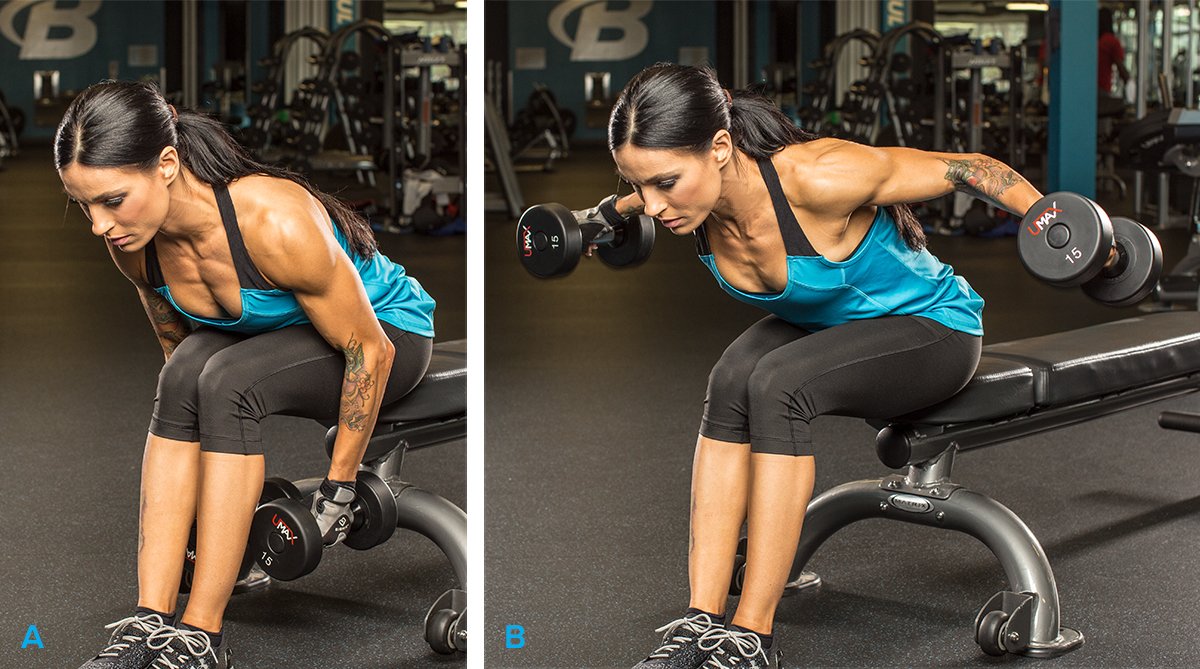 3. Seated Bent-Over On An Incline Bench

This is another rear-delt raise variation that reduces momentum. Here, you lie on a moderately inclined bench and perform the same motion as above. Brace your feet to stabilize your body. As you complete the lift, try to keep your chest pressed against the pad to reduce momentum. 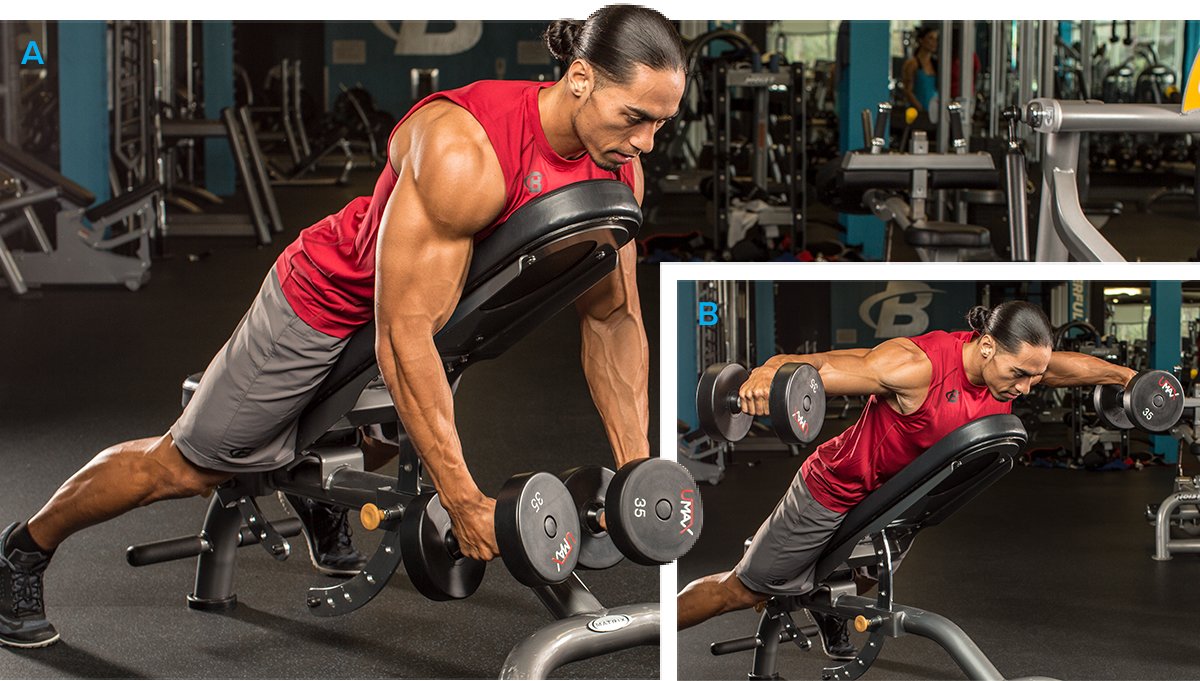 4. Standing Bent-Over With One Arm Using A Dumbbell

With your free hand holding a bench to stabilize your body, this variation allows you to focus on each side individually and correct any strength imbalances. Again, when standing, you're also able to generate a bit of momentum through your knees and hips. 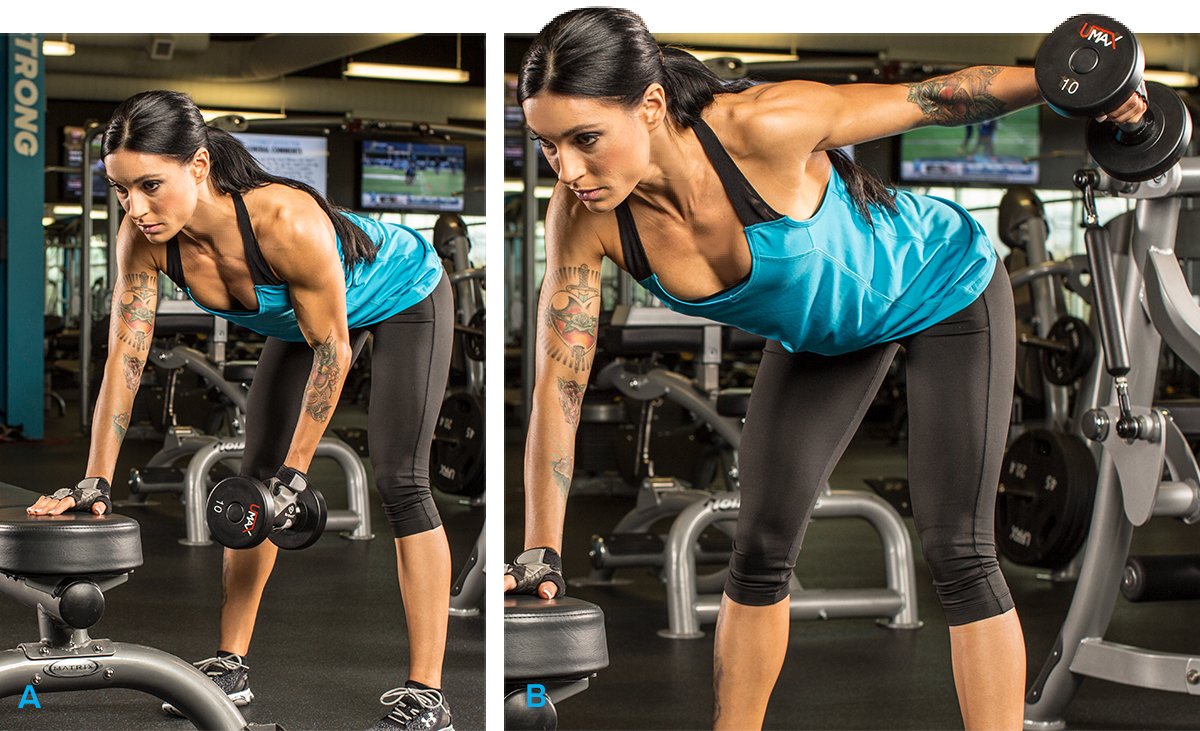 This machine forces you to lock your arms in the slightly bent position, which is especially helpful if you have the bad habit of extending your arms at the end of the range of motion. This motion can also be done one arm at a time. 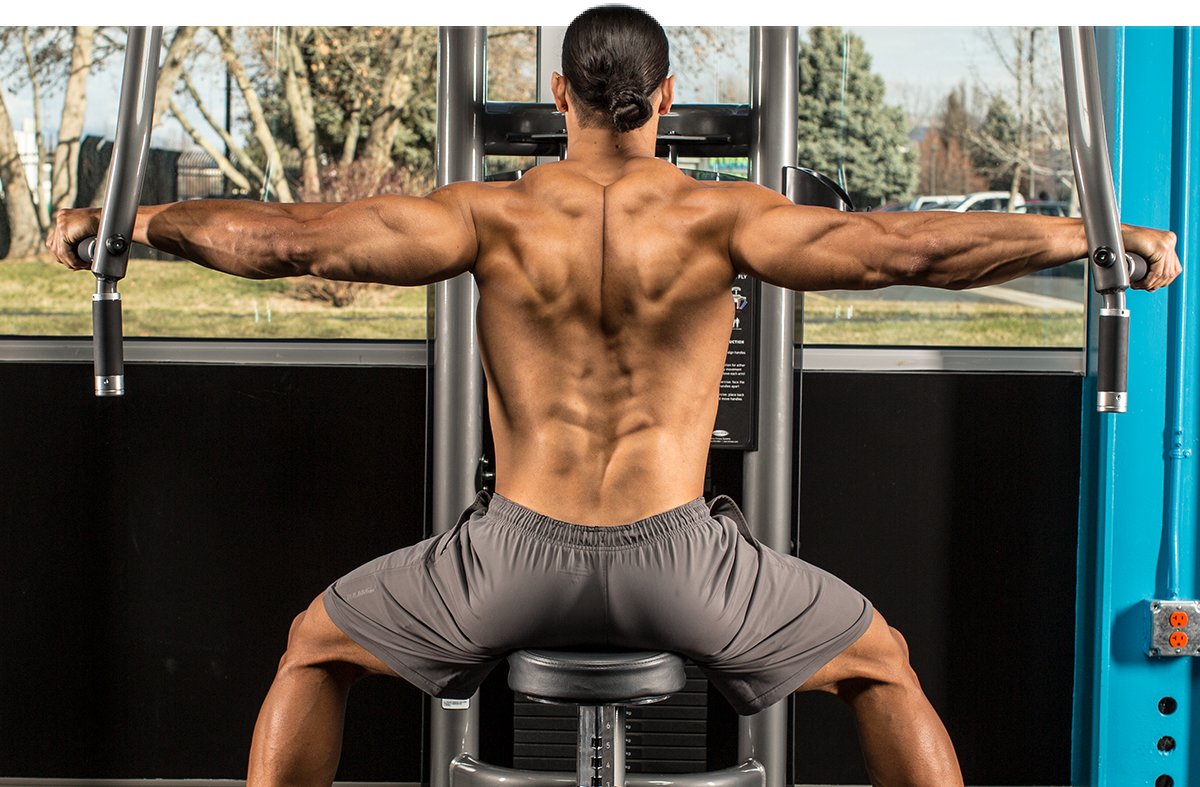 With cables, the line of pull comes from the sides, not straight down from gravity, as when using a dumbbell. This means the angle of pull on the rear delt changes, which hits the muscle somewhat differently than when using a dumbbell. Also, in the bottom position of this variation, the rear delt isn't resting because there's still tension on it so long as the plates aren't touching down on the stack. That constant tension can stimulate more growth. 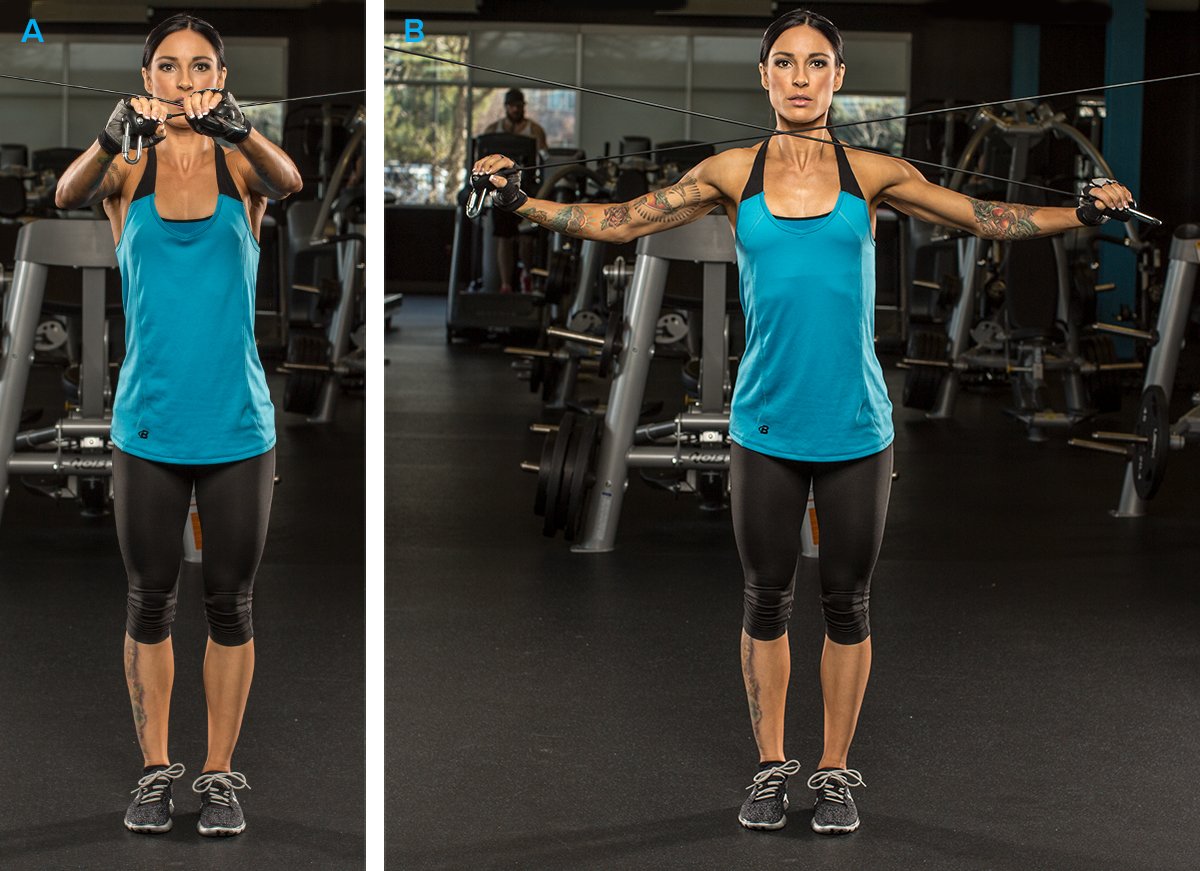 7. Standing Bent-Over With One Arm Using A Lower Cable

This exercise variation is similar to the one-arm dumbbell version, with the benefit of the pull coming from across your body, not straight down. You also get the benefit of working each side individually. It might be easier to lose the handle and grasp the rubber ball to keep your hand in neutral alignment (palm facing in). 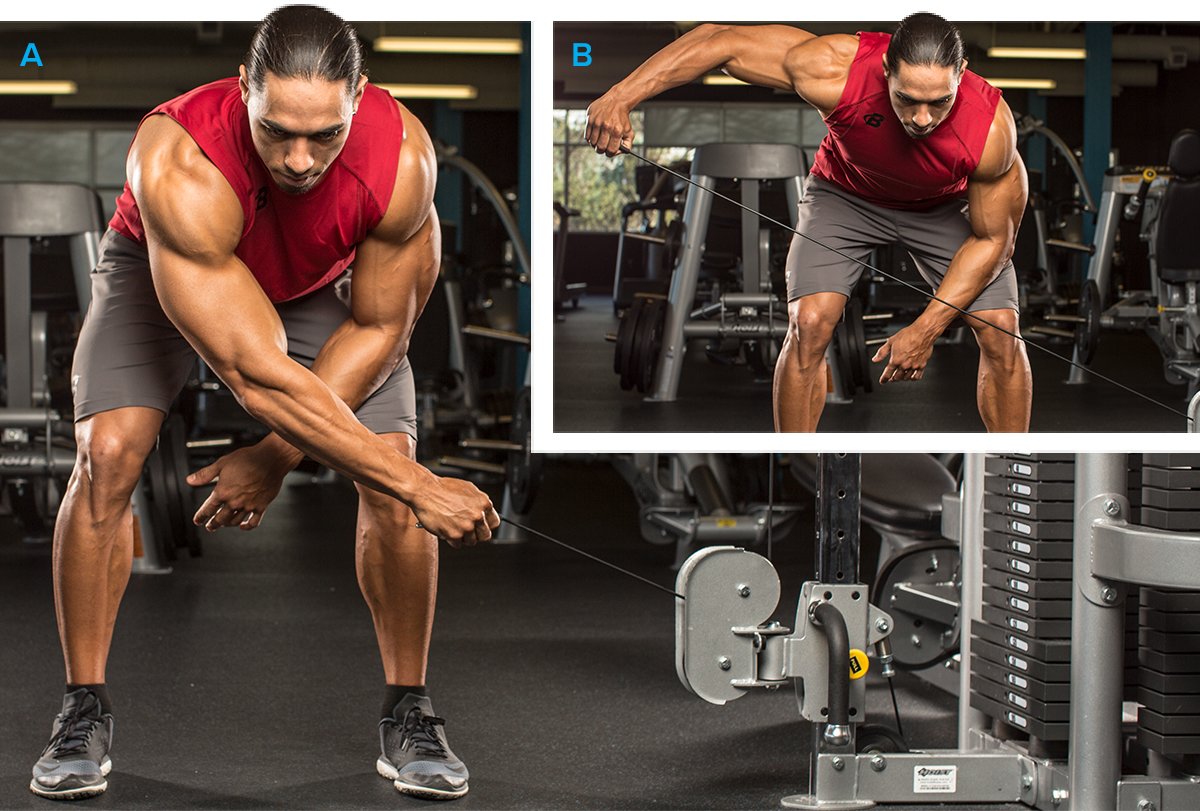 Now that you know a few variations for your rear delts, hit the gym and try each one to get the full effect. Don't limit yourself to variations on this exercise, either. Seek out new and interesting ways to perform all your staple movements so that you never get stuck waiting at the gym, never grow bored, and always keep growing!