Get Big Arms in 6 Weeks: 6-Weeks to Sick Arms

Build bigger and stronger biceps and thick defined triceps with this arm program. Grow like a pro with the ultimate science-based program for insane gains.

When I used to train at Gibson's Gym in Manchester, Connecticut, one of the slogans on the back of the gym T-shirts read, "It doesn't matter what kind of car you drive. What matters is the size of the arms hanging out of the window."

Big arms not only symbolize masculinity, but they're also the most visible body part you have. So it's no surprise that big arms seem to be what every guy, and even many women, want.

Regardless of where you're starting from, this 6-week program will heap a noticeable amount of size onto your arms. Some of you can expect to put on an inch or more on your arms by the end.

Follow the full program, Six Weeks to Sick Arms, in BodyFit. You can track your workouts in the BodyFit app, swap out lifts to match your equipment, and watch demonstration videos of every movement in every workout!

Why and How This Program Works

Trust me, there's a method to this madness.

Week one is designed to annihilate your biceps and triceps. You'll pull out all the stops, using negative rep training to really destroy every single muscle fiber you can in your arms.

You'll need a good week to recover from this onslaught. The next week pops your guns with lighter weight and higher reps. Volume will be low in these workouts, by design. You'll still be recovering from the previous week.

Big arms not only symbolize masculinity, but they're also the most visible body part you have.

These workouts will help you to better recover from the previous week and will get you ready for the crazy three weeks that are to come.

In weeks three, four, and five, you will be hitting arms three times per week. If you think that sounds like overtraining, you're precisely right. But overtraining does not happen immediately. It takes several weeks to actually become overtrained. The technical term for training that can lead to overtraining is called overreaching.

And what's interesting about overreaching is that research shows that if your diet is adequate in calories, protein and carbs, as well as the right supplements, then you can actually capitalize on overreaching and turn it into a way to grow bigger and stronger.

Several studies from the university of Connecticut have shown that when subjects overreach for several weeks, during the two weeks following, they grow significantly bigger and stronger while taking it easy. The key is to stop the overreaching just before it turns into overtraining.

That's why you'll be training arms three times per week in weeks three through five and then switch it up to just once per week in week six. I also suggest that the week after week six you take it fairly easy on your arms and train them just once that week before getting back into any serious training programs.

These workouts will help you to better recover from the previous week and will get you ready for the crazy three weeks that are to come.

The 3-day per week arm training not only is designed to shock your muscles into growing with frequent and intense workouts that cause overreaching, but it also takes advantage of the staircase effect for building muscle.

This refers to the fact that training activates genes in muscle fibers that are responsible for many of the adaptations that take place, such as muscle growth and strength increases.

Repeated workouts, if timed appropriately, can build upon the activation of the genes to reach an even higher activity level and greater muscle growth. This is referred to as "the staircase effect."

If you performed the workout on the fourth day after the first workout or later, then that gene would be bumped back up to 100% of its original activity.

However, if you worked out on the second day after the first workout, when the gene was still up by 50%, then you could potentially bump up its activity to 150%. This could lead to even greater muscle growth and strength gains than if you waited to train again after the fourth day or later, like one week later.

This is one reason why training a muscle group every 48 hours could lead to even greater muscle growth and strength gains than training every seven days.

Of course, this program is not all about training frequency. While moving to more frequent workouts can help you build extra size on your arms, to really get them up there in size will require pulling out all the stops. So intensity techniques, like drop sets, forced reps, rest pause, negative reps and supersets will be key in forcing them to grow.

These techniques will not only put more stress on the muscle, but they are also known to boost growth hormone levels. In fact, one study from Finland reported that subjects doing forced reps increased GH levels 3 times higher than when they just stopped after reaching muscle failure.

Drop sets, Forced reps, Rest pause, Negative reps and Supersets will be key to help you build extra size on your Arms.

Drop sets, Forced reps, Rest pause, Negative reps and Supersets will be key to help you build extra size on your Arms.

That extra growth hormone will be put to good use initiating muscle recovery and growth that will get that tape measure stretching. Another study reported in the Journal Medicine & Science in Sports & Exercise that subjects using negative rep training led to high GH levels.

One form of periodization that appears to be superior to other forms is called undulating periodizaion, which is simply the constant switching up of weight and rep ranges every workout. Research studies from both Brazil and the University of Connecticut have supported this form of training for making continued gains.

Since you'll be training arms pretty much every other day during weeks three, four and five, you may be worried about your arms still being sore when you train them. Don't be.

Research from Japan shows that when subjects workout intensely to cause muscle pain and train that muscle again just two days later and again four days later when the muscle is still sore, it does not impede recovery. Plus this can actually help them grow.

One study found that when subjects trained the same muscle group just two days, the catabolic hormone cortisol was lower. Since cortisol competes with testosterone, having lower cortisol levels during and after workouts can make you more anabolic and allow your testosterone to better enhance muscle growth.

Use the following training splits for each week of the Six Weeks to Sick Arms program.

Note: Use this training split during week one.

Note: Use this training split during week two.

Note: Use this training split during week three, four and five.

Note: Use this training split during week six. 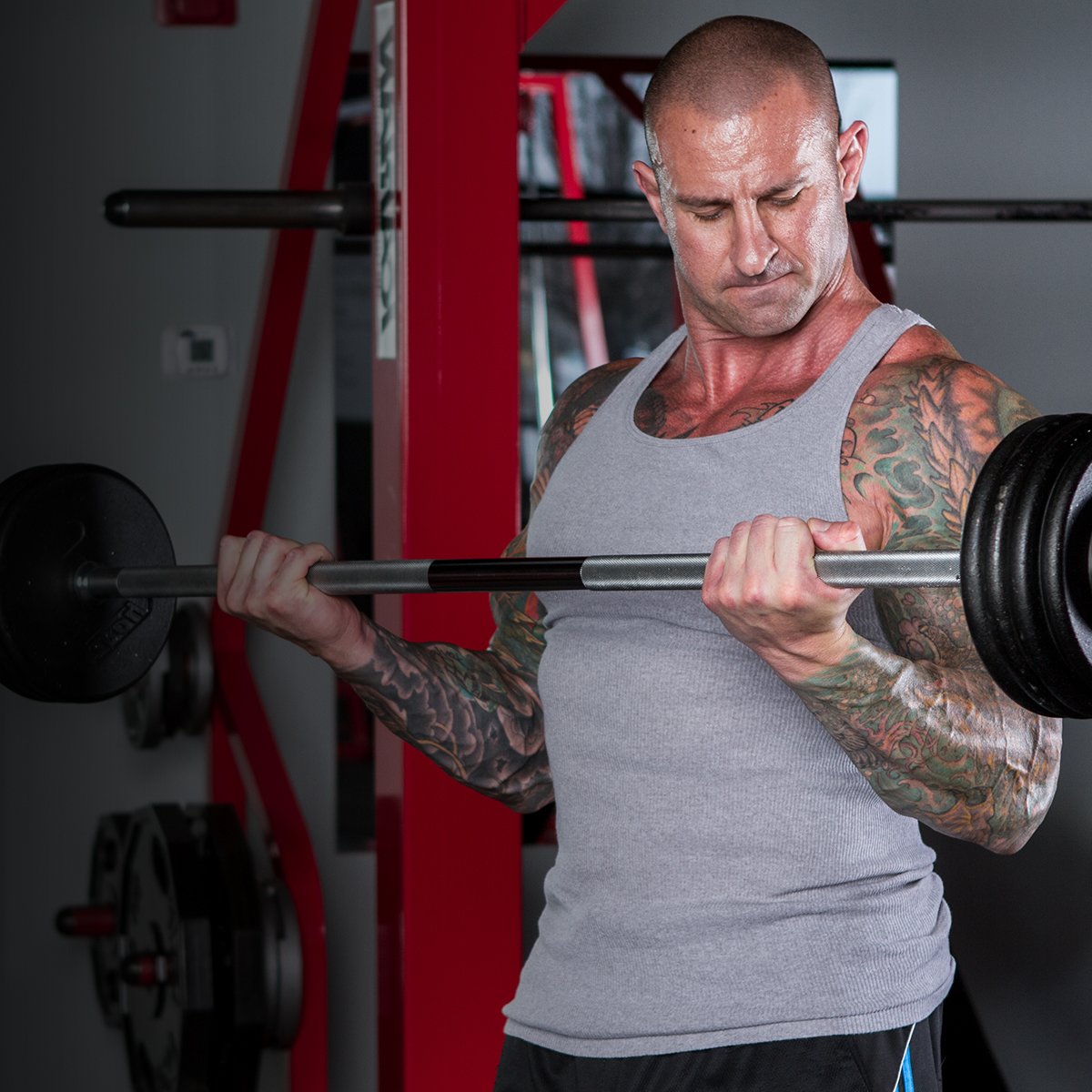 6 Weeks to Sick Arms: The Program
Follow this full 6-week program in BodyFit Elite! You’ll get a customizable workout tracker and app, with demonstration videos for all movements. Earn free shipping and store discounts, plus access to 70+ additional programs!