The 100-meter sprint is a brief, explosive event; the marathon is a prolonged, high-intensity, endurance event.

100-Meter Sprint Versus A Marathon

The essence of the 100-meter sprint is speed, with little oxygen breathed in during its 10-second duration, making the event almost entirely anaerobic (Newsholme, et al., 1994); whereas, although completed by elite marathon runners at a pace between 80-85% of their maximal capacity and the anaerobic system being utilized during sprint efforts in or at the end of the race, the marathon is a primarily aerobic event completed in 2 to 2.5 hours by elite marathon runners (Newsholme, et. al., 1994).

This article will compare and contrast the metabolic demands of the 100-meter sprint and the marathon. It will explain the different energy systems and metabolic pathways that are used by the working muscles to synthesize energy.

It will identify the source of the energy used during these events, discussing situations in which the working muscles use fuel of different types from more than one source. Finally, it will look at limitations of the stores and supply of those fuels and relate it to optimized performance in each event.

For the body to perform exercise for any given intensity or duration it requires energy. Energy is provided chemically in the form of Adenosine Triphosphate (ATP), a high-energy phosphate stored within skeletal muscle.

ATP is the only fuel that can be used directly by the working muscles for contraction. The body has limited stores (~80-100 grams) of ATP, only enough to supply energy for two seconds of maximal sprinting; therefore ATP must be continually be resynthesized from other sources through different metabolic pathways. 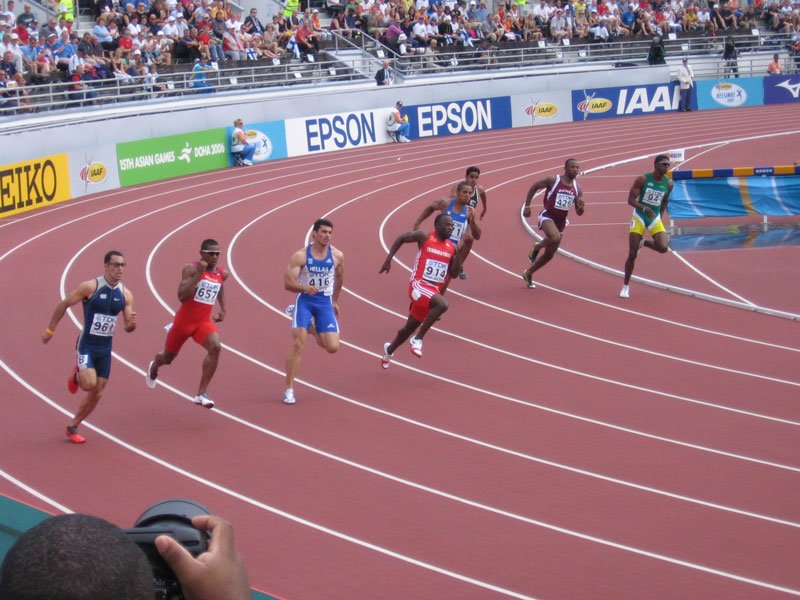 The 100-meter sprint utilizes both PCr and glycogen as fuel.

The intensity and duration of the event determines the fuel and the energy system that is required to provide energy (Maughan, Gleeson & Greenhaff, 1997; McArdle, Katch & Katch, 2007; Newsholme et. al., 1994).

There are three different energy systems in the body:

The purpose of each energy system "is to regenerate ATP at sufficient rates to prevent a significant fall in the intramuscular ATP concentration" (Maughan, et. al., 1997, p. 16).

The rate of PCr hydrolysis is highest within the first two seconds of contraction, but it begins to decline after only a few seconds of maximal contraction due to incomplete PCr resynthesis (Maughan, et. al., 1997; McArdle, et. al., 2007).

"Anaerobic energy for ATP resynthesis in glycolysis can be viewed as reserve fuel activated when a person accelerates at the start of exercise" (McArdle, et. al., 2007, p. 166) or performs an all-out 100-m sprint.

During intense exercise, if hydrogen production exceeds its oxidation, pyruvate temporarily binds to it to create lactate. Lactate then either 1) accumulates, because its production exceeds its oxidation (lactate accumulation, as will be discussed later, can be a cause of fatigue in the 100-meter sprint); 2) is oxidized to pyruvate; or 3) is diffused into the blood, where it is transported to the liver and enters the Cori cycle to undergo gluconeogenesis (McArdle, et. al., 2007; Newsholme, et. al., 1994).

During prolonged exercise like the marathon, as long as there is oxygen produced to the working muscles ATP can be resynthesized through aerobic metabolism (Brooks, 1999; McArdle, et. al., 2007).

During aerobic glycolysis steady-state oxygen consumption matches energy demands and pyruvate converts to Acetyl-CoA, which then enters the Krebs cycle and subsequently the electron transport chain in the mitochondria, where electrons are transferred from NADH and FADH2 to oxygen to form water and carbon dioxide in a process called oxidative phosphorylation, to regenerate ATP (Maughan, et. al., 1997; McArdle, et. al., 2007).

"While one energy system will predominate over the other, both aerobic and anaerobic energy systems are always working, regardless of intensity or type of activity" (Brooks, 1999, p. 103). The relative contributions of each energy system are dependent upon both the exercise intensity and duration (McArdle, et. al., 2007; Newsholme, et. al., 1994).

The contribution of energy from each energy system falls along a continuum.

At one extreme, during high-intensity, short duration (~10 seconds) exercise such as the 100-m sprint, where energy expenditure of the working muscles exceeds their resting value by 120 times or more, the intramuscular high-energy phosphates supply almost all of the energy required.

At the other extreme, during less-intense, prolonged exercise such as the marathon, where energy expenditure of the working muscles only exceeds resting levels by 20 to 30 times, anaerobic processes are not needed and aerobic processes provide almost all of the energy required (McArdle, et. al., 2007; Newsholme, et. al., 1994).

Fuels In The Body

There are various fuels in the body that can maintain as-needed ATP resynthesis: The intramuscular high-energy phosphate PCr, as well as the macronutrients carbohydrates, lipids, and protein.

There are many different metabolic pathways that these fuels utilize in the regeneration of ATP.

PCr is stored only in skeletal muscle, in amounts four to five times that of ATP. PCr rephosphorylates Adenosine Diphosphate (ADP) in skeletal muscle to form ATP anaerobically. The equation for PCr hydrolysis is ADP + PCr Creatine Kinase ATP + Cr (McArdle, et. al, 2007). PCr is very important for events such as the 100-meter sprint, when energy is required immediately and without oxygen (McArdle, et. al., 2007; Newsholme, et. al., 1994).

Carbohydrates are stored in the body as either glycogen or glucose, predominantly in the liver and muscle, but also in adipose tissue, the bloodstream, and the brain. Carbohydrates are metabolized through glycolysis, a process that can be both anaerobic (conversion to pyruvate or lactate) and aerobic (continuation through metabolic pathways as pyruvate converts to Acetyl-CoA and enters the Krebs cycle and electron transport chain for oxidative phosphorylation).

During the marathon a further two ATP is provided through substrate-level phosphorylation in the Krebs cycle, and 32 ATP molecules are resynthesized during oxidative phosphorylation, regenerating a total of 36 ATP through the aerobic metabolism of carbohydrate.

Muscle glycogen is the most important fuel in the 100-meter sprint, as it is immediately available when contraction occurs (Newsholme, et. al., 1994).

Lipids are stored in the body as triglycerides, mostly in adipose tissue, with some intramuscular stores, as well as in the liver and the bloodstream. Lipids are hydrolyzed down to glycerol and three fatty acids in a process called lipolysis. Whilst the fatty acids must undergo the aerobic process beta-oxidation in order to regenerate ATP, glycerol can enter the metabolic pathways through glycolysis.

Lipids are an important energy source during long-distance events such as the marathon, as they are more energy dense than carbohydrates (Maughan, et. al., 1997; McArdle, et. al., 2007; Newsholme, et. al., 1994). Compared to the 36 ATP regenerated by a glucose molecule, each triglyceride molecule regenerates a net 460 ATP: 441 ATP through beta-oxidation, the Krebs cycle and oxidative phosphorylation, and a further 19 ATP through the glycolysis of glycerol.

Lipids are not the ideal fuel for exercise because fatty acids must be transported to skeletal muscle from adipose tissue via albumin in the blood, before they can be oxidized in the metabolic pathways.

However, this makes them the ideal fuel in the later stages of endurance events, such as the marathon, once glycogen stores have been depleted and the marathon runner's pace has dropped to approximately 50% of their maximal capacity (Maughan, et. al., 1997; McArdle, et. al., 2007; Newsholme, et. al., 1994).

Protein is stored predominantly in muscle in the body, but also in the liver and minutely in adipose tissue. When glycogen stores have become depleted protein can become an important fuel, and during endurance events such as the marathon, protein can provide up to 10% of the energy needed for ATP resynthesis (Maughan, et. al., 1997; Wardlaw & Hampl, 2007).

The total ATP regenerated by protein is dependent upon where it enters the metabolic pathways (McArdle, et. al., 2007; Newsholme, et. al., 1994).

Fuel Use In The 100-Meter Sprint And The Marathon

The fuel used to regenerate ATP during exercise depends upon a variety of factors, including the intensity and duration of the exercise, substrate availability, and muscle fiber type composition, amongst others (Maughan, et. al., 1997).

The 100-meter sprint utilizes both PCr and glycogen as fuel. There is enough PCr in the leg muscles to provide half the ATP needed for the race. Glycogen therefore provides the other half of the energy required.

In the 100-meter sprint it takes 1-2 seconds for the rate of glycolysis to increase at the required factor of at least 1000 (Newsholme, et. al., 1994). Thus PCr hydrolysis contributes to the majority of ATP production during the first two seconds of the race, while glycolysis reaches its maximal rate. Research has shown that maximal sprinting performance is achieved through the simultaneous use of PCr and glycogen (Newsholme, et. al., 1994).

During a race the marathon runner uses approximately 75 kilograms of ATP, and as this amount cannot be stored in the body ATP is resynthesized from different fuels (i.e. PCr, carbohydrates, lipids and protein), with the catabolism of the fuels providing the energy required.

Based on simulated tests elite marathoners utilize 5 grams of glycogen per minute (Newsholme, et. al., 1994); therefore it can be calculated that the elite marathon runner would be exhausted after only 90 minutes of running if they only used carbohydrates as fuel (Maughan, 1997).

Glycogen and glucose cannot be stored in amounts sufficient to entirely fuel the marathon; thus other fuels also contribute to ATP resynthesis.

Limitations Of Fuel Stores And Supply And Fatigue

Fatigue is inevitable during high-intensity exercise. Fatigue is defined as "the inability to maintain a given or expected output or force" (Maughan, et. al., 1999, p. 155), and it is likely to be a multifactoral process during both the 100-meter sprint and the marathon (Juel & Pilegaard, 1999; Maughan, et, al., 1997).

During the 100-meter sprint the greater the oxygen deficit, the greater the ATP and PCr stores are being depleted, and the greater the accumulation of lactate (Maughan, et. al., 1997; Newsholme, et. al., 1999). Lactate decreases the pH of the tissues in which it accumulates; and studies with isolated muscle preparations have shown that decreasing skeletal muscle pH either 1) impairs muscle contraction by disrupting calcium release, or 2) inhibits ATP resynthesis (Allen, Balnave, Chin & Westerblad, 1999; Jule & Pilegaard, 1999; Maughan, et, al., 1997; Ross & Leveritt, 2001).

Studies involving biomechanical analysis of muscle biopsy samples taken from the vastus lateralis at rest and after 10 seconds of maximal sprint exercise i.e. (the 100-meter sprint) show that "ATP is supplied initially by maximal rates of ATP degradation and glycogenolysis, particularly in type II fibers" (Greenhaff, Casey, Constantin-Teodosiu & Tzintzas, 1999, p. 283); and that it is the depletion of PCr in those fibers that are primarily responsible for fatigue (Greenhaff, et. al., 1999).

Further studies show that during endurance exercise like the marathon, fatigue is a response of the brain as a consequence of glycogen depletion in the type I muscle fibers (Greenhaff, et. al., 1999; McArdle, et. al, 2007; Newsholme, et. al., 1999).

There has been suggestion of a 'central governor' in the brain, that subconsciously paces the working muscles so that they do not reach complete exhaustion, and that the brain creates sensations interpreted as fatigue to limit exhaustive exercise and prevent maximum lactate accumulation (Noakes, Peltonen & Rusko, 2001).

The 100-meter sprint is an explosive, maximal race lasting about 10 seconds. The immediate and short-term energy systems are utilized to anaerobically chemically regenerate ATP from intramuscular stores of PCr and glycogen respectively during the race.

Short, high-intensity exercise, such as the 100-meter sprint has a greater reliance upon carbohydrates as a fuel source than the still-high-but-lower-intensity marathon, which relies more upon the oxidation of lipids to regenerate ATP (Maughan, et. al., 1997; McArdle, et. al., 2007; Newsholme, et. al., 1994; Spriet & Odland, 1999).

Metabolic changes such as lactic acidosis, fuel depletion, impaired excitation-contraction coupling and product inhibition, that occur during the 100-meter sprint and the marathon, inevitably cause fatigue, thereby reducing the pace that the sprinter or marathon runner can maintain for the race, which can result in reduced performance in each respective event (Maughan, et. al., 1997; McArdle, et. al., 2007; Newsholme, et. al., 1994).

Rosie thrives on challenges and continually progressing as an athlete and trainer. She works with male and females alike to provide motivation...