Aaron started training to get buff but found he had gained more body fat than he was happy with. Learn about his amazing transformation and how he lost 30 lbs! Check it out.

What Got Me Started

Before I began "bodybuilding" two years ago, I had always been into lifting weights, because I played basketball on my high school team for four years.

After university began, I needed a way to stay active, since I wasn't playing organized basketball anymore. Also, I had always received compliments how I was "big" and "buff," but this was when I only worked out maybe once or twice a week. Plus, I've always had a phobia of body fat. I guess I wanted to see what kind of changes I could make when putting 100% effort into my body.

Why I Decided To Change My Body

At first, I just wanted to get "big" like a bodybuilder, so after 6 months of working out 5 days per week, and eating everything in sight, I gained about 10 or 15 lbs. At first, I was really happy with my progress, because I thought I was getting buff. But, after taking a new set of pictures at the 6 month interval, I was very unhappy to find out that I gained a lot more fat than I had thought I had. I guess you could say this is where the real "transformation" began.

Immediately after I took the 6 month pictures, I started introducing

into my routine twice a week, even though I hated it. I would do two

sessions per week on the elliptical machine. 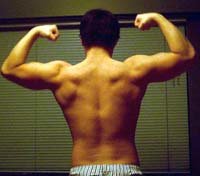 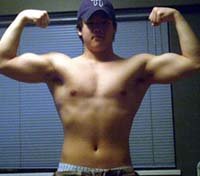 On resistance level 12, I would

for twenty seconds at about 85-90 RPM, and then "jog/walk" at about 40-50 RPM for 40 seconds to recover. I repeated this cycle 20 times for every HIIT session. Of course, I would do 5 minutes of warm-up and cool down before and after. Doing this cardio routine only twice per week helped me drop about 10-12 lbs in the first three months, and close to 20 lbs within 6 months. 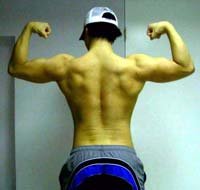 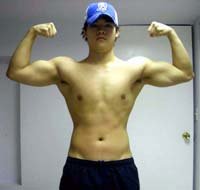 Losing the last 10 pounds from 180 to 170 took a lot more work. To do this, I increased cardio to 4x per week. By this time, however, I was getting tired of *just* doing HIIT on the elliptical, so I would rotate it with

on the treadmill. For swimming, I usually do just 20 laps; 5 laps freestyle, 5 laps backstroke, 5 laps breaststroke, and 5 laps butterfly.

For running, I would alternate either running straight for 20 minutes at about 7-7.5 MPH, or "Body-for-life" style running, which has you change speeds every minute; the first minute, you start at 60% of maximum, and increase 10% every minute until 90%, then you drop down to 60% and repeat the cycle until 5 cycles are completed. Also, on the last cycle, you go all the way to 100%.

Mixing up the cardio like this kept me from being bored, and I believe it helped me lose weight faster than if I were to have kept doing the same cardio all the time. People say that you should mix up your weight lifting routine to keep your body guessing; I believe this to be true for cardio as well. 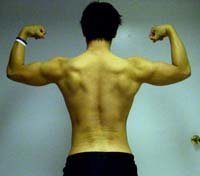 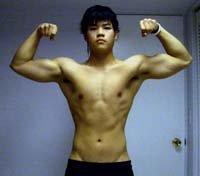 I should note that all this cardio was done in addition to playing recreational basketball 3-4 times per week. I should also add that doing cardio 4x per week like this was very tiring, so I could only keep it up for about 2 months. After resting for a couple months at 2x per week, I've increased it again.

I've pretty much stuck with the same routine throughout the two years I've been bodybuilding. I've experimented with

, but usually come back to this layout.

The one thing that I HAVE changed within the last year, however, is the amount of reps. I used to work out with heavy weight and 5-8 reps. However, my brother-in-law became a personal trainer, and altered my workouts. I now do 12 reps per set, and I only take 30 seconds of rest between sets. This high intensity style helped burn more calories, and helped build a lot of endurance. Plus, I'm even stronger now than I've ever been. I'm now trying something slightly different to see how I respond:

I don't really do anything fancy with diet, I just use common sense. I don't count calories; I mostly focus on smaller portion sizes to restrict calories when I'm trying to lose weight. I also do NOT try to get 1-2 grams of protein per lb of bodyweight; that is excessive to me, and it's what made me become fatter in the first place.

I would say I eat clean about 95% of the time. When I "cheat," I usually treat myself with an extra serving, rather than cheating on high calorie foods. That isn't to say it doesn't happen, though, as I like to have pizza or fries once in a while; there are too many good foods out there to exclude completely from the diet. 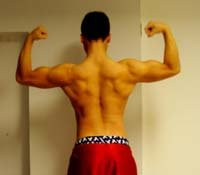 I've experimented with creatine and fat burners, but the only thing I am consistent with is whey protein. However, I did stop taking it for about 7 months when I first did cardio 4x per week, with little ill effect. I'm now back on it, just to see if I can see a noticeable difference after being off of it for a while. 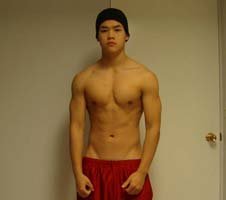