Just in case you don't know much about cricket - it involves the use of a bat and a ball, and the players play on a specially developed pitch of grass. Learn more about this game, what the players do, sample cardio training methods, and more! Read on.

Just in case you don't know much about cricket - it involves the use of a bat and a ball, and the players play on a specially developed pitch of grass. The bowler has to produce a delivery from one end of the wicket and keep his teams runs down... while the batsman (at the other end of the wicket) has to hit the ball and try to get as many runs as possible, while guarding his wicket.

The batsmen (2 of them) can run between the wickets when they hit the ball anywhere in the playing field. But it is advisable to only run if there are definite runs there to be made because if you run and the ball is fielded quickly there is a chance that you or your partner could be run out. This is the job of the fielders, they have to gather the ball as quickly as possible and throw to the wicket keeper or any other fielder near the wicket, to stop the runs or to run the batsmen out. 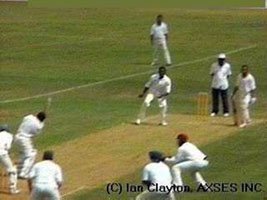 Click Image To Enlarge.
The Batsman Tries To Hit The
Ball That The Bowler Throws.

Cricket players are like any athletes, they need to train and be on top of the game at a certain point, where they peak at certain times of the year. Many teams incorporate the use of strength and cardiovascular exercises, to increase the fitness of their players and reduce the risk of injury when it comes to the summer.

To fulfill such a criteria you need to have good focus, to stay on top of the game and remember the state of the game so that you can get as many runs as possible.

As well as this the a good batsman needs to have immense hand/eye coordination so that he/she can hit play every shot correctly, as it should have been played.

In general the power from a batsman will come from the core (abdominals) as well as the arms including the major muscle groups. The batsman needs to (in most cases) hit the ball explosively but with exact precision so that there isn't a chance of getting out.

The bowler's job requires the combination of both explosive strength and speed. Due to the fact that bowlers are fielders as well, they need good endurance as well as power.

Endurance really comes into play when the bowlers need to bowl for many overs. Some bowlers may suffer from cramps and other problems due to the continuous activity. In general fast bowlers have a greater ratio of fast-twitch fibers to slow-twitch fibers. This aides them naturally to deliver the ball at high speeds.

Fielders need to be able to concentrate their efforts for periods, maybe 5-6 hours with little rest. Sometimes this criteria needs to be met in very warm conditions, especially when cricket is played in the peak seasons in Asia. Good fielders are able to produce explosive bursts at any given time for example when sprinting after the ball or catching the ball.

As a minimum cricket players should make an effort to complete 2-3 sessions of 30-60 minute cardio sessions every week. Ideal cardio training for cricket players doesn't have to be too intense, maybe 60%-75% of your maximum heart rate is reasonable enough for the purposes of cricket.

While training one should be able to have conversation and should finish with a reasonable amount of sweat produced. One should try to include running, rowing and cycling into his/her cardio session. Maybe as you become better at cardio you could do 15 minutes of all three methods.

This method of training improvement is relatively easy, as it can be done as a team with little equipment. Gather the team in a circle and throw the cricket ball around the circle.

As you improve you can expand the circle (move everyone further outwards) and start to throw the ball with more power. This is an excellent training method as it challenges the Neuromuscular system. This kind of training should be completed before a match, to warm up the hands getting ready for that sudden catch.

The above arrangement of exercises can be completed in a circuit one after the other. For example - you could spend 5 minutes on each of these exercises, moving on swiftly when you have completed the exercise.

Another example would be shuttle sprints usually fielders have to sprint at some part of the game, so you complete shuttle sprints. You could start off by lying on the ground (as if you have dropped the ball) then you could run the lengths for 30 minutes.

You start off with the training method above (the circuit). To make everything much more intense you need to use weight for the appropriate exercises. So for decline hops you could have 4 lb dumbbells in both hands. Then if you are feeling really brave you can slow each and every movement down so it is brutally effective.

Another example is starting off with the shuttle sprints. Now that you are improved put your cricket gear on and complete the runs. This will simulate realistic conditions is the game.

Overall cricket is a game that requires speed, strength and endurance. Therefore the serious player will find it necessary to train to improve his/her overall performance. It will work so well to train in the off-season as it will show when you peak in the on-season.