Nick Miller Packed On 22 Pounds Of Lean Muscle To Build A Physique Like His Bodybuilding Dad!

Nick was sick of being bullied and people calling him names. With his Dad as an inspiration and copies of bodybuilding magazines for help, Nick packed on 22 pounds of lean muscle! Find out how he did it below!

I was sick of all the name calling and bullying. The doctors, my friends, kids at school, my parents, everybody I knew was telling me I was fat, as if I couldn't tell by looking in the mirror. Also I never had a girlfriend, my ultimate goal was to have girls flirt with me and be attracted to me rather than repulsed.

My Dad, who was a bodybuilder at my age, showed me his pictures at age 15 and I felt like a fat piece of crap. I've never been a sports guy, but my dad played every sport in the book and excelled at all of them, and on top of that, he had a physique that was considered perfect by most standards. I felt as though I wasn't the son he wanted.

I was the complete opposite of him at my age. His competition pictures were mind blowing; he had a body I could only dream of, and abs that were absolutely shredded. He always had an interest in sports and fitness that I eventually inherited.

One day I noticed the giant stack of FLEX magazines that he had accumulated over the years; I began to look through them in curiosity after seeing the hulking arms of Peter Putnam gracing the cover of a 2006 issue. I decided right then and there I would do anything to get arms like his. 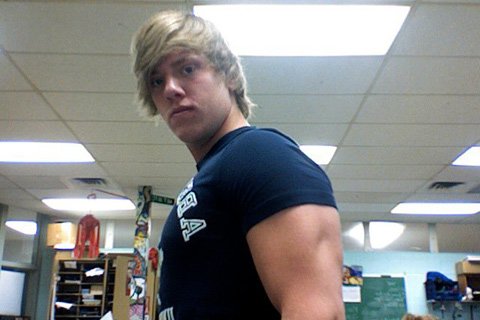 Click To Enlarge.
I Decided Right Then And There That I Would Do Anything
To Get Arms Like Peter Putnam.

The first year was my 8th grade year. Before I had decided to try for a bodybuilder physique, I just wanted to lose the weight. So I started dieting on only fruits, vegetables, and lunch meat sandwiches. I didn't know how to read nutrition labels, and I didn't know much about carbs and calories, and I just knew what was generally healthy.

I found a pair of 10 pound dumbbells in my basement. My arms could only handle 10 curls every other day. My arms would be riveting with pain afterward considering I had never picked up a weight or strained my muscles in my life. By the end of 8th grade I weighed only 130 pounds. I was very proud, but now I wanted to do better than weight loss, I wanted a good physic.

I asked my dad to train me, and he agreed gladly. We started going to our community recreation center every single day, and did a full body workout over the course of 2-or-3 hours per night. That was hell for my body. I wanted to quit but I didn't, I kept at it, every single day, despite the pain.

By the end of my freshman year I weighed 145 pounds, and had a pretty muscular frame. Sophomore year I started working with the football team, and I joined a weight training class at my school, so each day I was hitting the gym 2-or-3 times about 3 hours per day. The training I did sophomore year had more effective splits for muscle building and powerlifting and such. I weighed 165 pounds by the end of sophomore year.

Junior year, my dad bought us memberships to our local World's gym. This gym was much more effective for me as I had much more freedom and much more variety to train as I pleased. Over the course of my Junior year I gained almost another 20 pounds, and I now weigh 182 pounds. 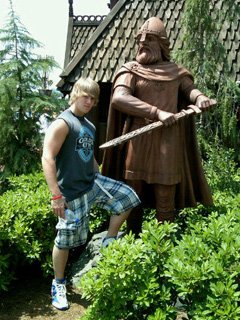 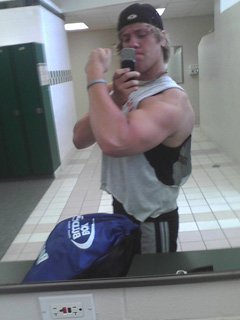 Click To Enlarge.
I Kept At It, Every Single Day, Despite The Pain.

Note: Supplement dosages and schedule listed below in Diet section.

Never give up. If you have a dream, go for it. You'll always miss all the shots you didn't take.