Sports Supplements: What Works, What Doesn't, What Does More Harm Than Good?

Some can be beneficial if taken in a safe and appropriate manner, while others will be just a pretty big waste of your money. Find out what they are ...

With the advances the pharmaceutical world is making today, numerous sports supplements have begun to appear on the market, each promising to accomplish something amazing. Some can be beneficial if taken in a safe and appropriate manner, while others will be just a big waste of your money. Some if you're not careful can even cause more physical harm than good.

It is the responsibility of the athlete to look into the supplements they are taking and decide which one is right for them. Everyone will react slightly different to a chosen supplement so just because your best bud grew to the size of a tank using one particular kind doesn't necessarily mean you will. Proper diet and training will go a long way toward enhancing the supplements effects and should never be replaced by supplements alone.

To start our look at the current popular supplements that are used today we will begin with antioxidants. When we place our bodies under great stress during our rigorous exercise programs we increase the body's use of available oxygen, thus increasing oxidative stress and therefore increasing the free radicals in our body.

With more free radicals floating around, we will take longer to recover between bouts of exercise. The job of antioxidants is to detoxify these free radicals thus speeding recovery. Common antioxidants that are obtained from the diet are ascorbic acid (vitamin C), Vitamin E, Coenzyme Q10, and B-Carotene, which is a precursor to Vitamin A.

When an athletes diet is lacking in any of these nutrients (which would not be uncommon among the dieting population), supplementation of one or more of these supplements may prove to be very beneficial.

Other lifestyle factors such as smoking, alcohol consumption, exposure to environmental stressors such as UV rays, age, work related stress and genetic predisposition all will contribute to the balance of antioxidants in the body.

To offset the negative balance of free radicals formed during exercise, it is recommended to supplement with 600 mg -tocopherol, 1000 mg ascorbic acid and 32 mg B-carotene (Sen, C.K., 2001).

Endurance athletes may also benefit from 100 to 200 mg of vitamin E as they are more at risk for oxidative damage due to the prolonged increased use of oxygen (Iwane, H., 2000).

Some athletes may need to take more, while other may need less, depending on their level of training and the combination of the various factors described above. So, although antioxidants may not be ergogenic, a diet that is rich in these nutrients or by additional supplementation will prove to help the athlete recover and increase their general health.

Next, we'll move onto the common supplement that everyone has taken at one time or another for enhanced performance or not, caffeine. Caffeine works by stimulating adrenaline secretion, which mobilizes free fatty acids. This helps provide fuel to the muscles through fat tissue utilization and helps spare glycogen depletion.

Caffeine is particularly useful in endurance sports as performance in this type of activity is often reliant on muscle glycogen. In a study with trained triathletes and cyclists, those consuming caffeine improved their time regardless of the dosage taken. It should be noted however that the higher doses provided no additional benefits over the middle doses, thus showing that there may be a limit to how much caffeine the body can use at any given time.

Caffeine has also shown to be beneficial in sprinting exercises, where the athlete is going full out for a short period of time (a mode of exercise comparable to bodybuilding), however not as ergonomic as it is in endurance activities.

Common doses of caffeine taken are 250 mg - 700 mg approximately 1 hour before the exercise is to be performed. This will allow the athlete to show improved performance while still remaining under the disqualifying amounts set by the IOC and NCAA. Side effects of caffeine are relatively small, although anxiety, dependency and withdrawal can be seen if the athlete relies excessively on caffeine.

The athletes need to also be aware that urine tests of caffeine can be fairly inaccurate so they need to take extra precaution regarding the dosage they are taking. Tablets are the most ideal form to take caffeine in, however consuming coffee is often the choice of many athletes. Keep in mind that coffee can vary greatly in its caffeine content, so once again, take precaution.

Here Is A List Of Common Sources Of Caffeine & Their Amounts:

The next supplement that is particularly common among the bodybuilding crowd is creatine. Creatine is a compound found in the body along with PCr and serves to provide the body with its main source of fuel, ATP during short bouts of intense exercise. 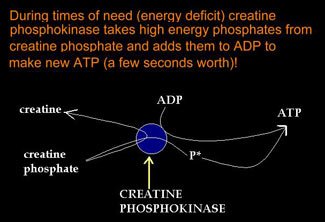 Creatine by itself however is not anabolic and does not produce any gains in lean muscle mass. Weight gain will be noticed as water retention increases dramatically upon taking creatine, which may be of concern to some athletes involved in weight bearing activities.

Runners for example, show a decreased performance upon taking creatine as their weight increases which slows down their time. Therefore, creatine can be beneficial for some athletes, such as those involved in anaerobic non-weight bearing activities. Another negative side effect of creatine, apart from water weight gain is muscle cramping due to increased muscle compartment pressure.

Finally, creatine, when taken in large doses can affect renal function such as glomerular filtration. The typical dose of creatine taken is 20 grams per day during the initial loading phase and then 5 grams per day in the maintenance phase. Athletes often take more than the recommended dose however, adopting the 'more is better mentality,' which is unnecessary and will be more harmful than anything.

One of the most controversial supplements out there right now is ephedrine (ephedra). Ephedra (also known as Ma Huang in the plant form) is common in many different fat burners. It's known for its thermogenic effect (increasing metabolism) and for increasing energy levels among athletes.

Originally this herb was used to increase to treat those with asthma and those with common colds as it also increases the air passages. Now though, many people take it for it's weight loss benefits as it seems to promote the burning of fat tissue while retaining muscle mass.

Some studies have shown that 1 mg/kg ephedra improved anaerobic performance on a 30 second windgate test, however this improvement most likely resulted as an effect of increased nervous system arousal than because of increased tissue metabolism (Juhn, M., 2003).

Ephedra has also been shown to decrease the appetite, thus helping those who are dieting to resist the urge to give into their cravings. Ephedra is often combined in what is known as the ECA stack, which comprises of Ephedra, Caffeine and Aspirin taken in the doses of 20mg, 30mg and 80mg respectively. (The caffeine and aspirin are added to the ephedra as this serves to prolong the effects of the ephedra over time - the addition of these substances actually increases the effects as time goes on rather than decreases them!).

The negative side effects of ephedra however is what calls attention to many people these days. Some of these side effects include increased heartbeat, anxiety levels, jitteriness, difficulty sleeping, allergic reactions, high blood pressure, irregular heartbeats and in high doses stroke and psychosis. Most of these side effects should not be too much of a concern as long as one sticks to a lower dosage, however many people, when taking it for fat loss take a higher dose and may run into problems.

Everyone will also react differently to this supplement (as with all others) so just because you are taking a recommended dose does not mean you will not experience any negative consequences.

Lately, numerous adverse events, some resulting in death, have been reported in the United States in conjunction with taking ephedrine so it is therefore important to take precaution if you decide to use this herb. Also note, due to the side effects, those with irregular heartbeats, high blood pressure or on heart medication should refrain from taking ephedra.

A more uncommon practice that may be used in an attempt to increase performance is Erythropoietin. This substance is produced naturally in the body by the kidneys and is used to regulate red blood cell production. Patients suffering from anemia or chronic renal failure are legally allowed to use this form medically, however some athletes have decided to take advantage of this substance as well.

Due to medical advances, we can now inject EPO rather than blood doping, which was the common method in the past. EPO works by increasing the blood's ability to carry oxygen, thus serving as an ergogenic aid. Some studies have shown that athletes have had an 9% increase in VO2 max, 7% increase in power output, and a 5% decrease in max heart rate ((Juhn, M., 2003).

While the benefits of using erythropoeitin are unquestionable, there are serious side affects that an athlete needs to consider. After injection, the blood has a higher concentration of red blood cells and a thicker viscosity. This may lead to thromboembolic events that could be fatal.

Seizures and hypertension are also demonstrated in those athletes who are blood doping. Most athletic federations have banned this practice and a hemoglobin limit of 18.5 g/dL has been implemented.

The injection of EPO in the body is a practice that would be beneficial to any athletes involved in endurance activities. It would allow them to carry more oxygen per unit of blood than before thus improving their performance. This is not a sound technique however as there are strict regulations around it and there are many adverse health consequences that have been reported.

These are only a few of the sports supplements that are used among athletes in various types of sports. Supplements should never replace good diet and proper training, as this is far more important when considering improvement, and as with the case of antioxidants, if you are eating a good diet, you most likely would not even need to worry about these supplements.

Caffeine can prove to be helpful in some events and is a common drug that is taken by not only athletes but by the general population for various reasons, first and foremost, to get people motivated to get going in the morning!

Ephedra and Erythropoietin are two of the more controversial supplements and will most likely continue to be for some time to come. Both have proved to be effective however the negative side effects that one may encounter make it hard to justify its use.

Finally creatine, which could be one of the most popular bodybuilding supplements is effective, not directly, but by allowing the individual to work harder, recover faster and thus increase muscle mass through an increased work output. This is a perfect example of how a good workout program will work with the supplement to show an increase in performance.

Don't miss part 2 of this article, where I will discuss HMB, Human Growth Hormone, Proteins and Amino Acids, Pyruvate, Androdestenedione and DHEA.