The squat is a beautiful exercise. It demands respect and challenges you to execute it with pinpoint form, full range of motion, and unmatched intensity. When it comes to squat day, you show up focused and prepared to dominate, because if you don't, the squat will eat you alive.

These top tips from elite strength-training coaches are your ticket to a deeper, heavier squat. Use their knowledge to correct your mistakes and blast out of the hole with force and control.

Q
What is the most detrimental squat
technique and how do you
correct it?

It's amazing how many people claim to own a legit 300-pound, ass-to-grass squat for multiple reps. I hear it all the time at my facility. A prime example is when some hotshot athlete walks in boasting about how he hit a 400-pound max squat a few weeks prior with his high school football coach. He probably made out with Mila Kunis the night before too.

I don't mean to sound overly cynical. I know there are many strong people out there. But from my observations, 9 out of 10 people who claim to squat like a pro simply can't. It's not surprising to see chest-thumping athletes get crushed at 185 pounds when I force them to squat to proper depth—when the anterior surface of the thighs go below the knees.

I've learned to go light on overconfident squatters because most people's definition of ass-to-grass isn't close to reality. Assuming there's no prior injury history or contraindications attached to a squatter, the biggest mistake they can make is failing to hit proper depth. 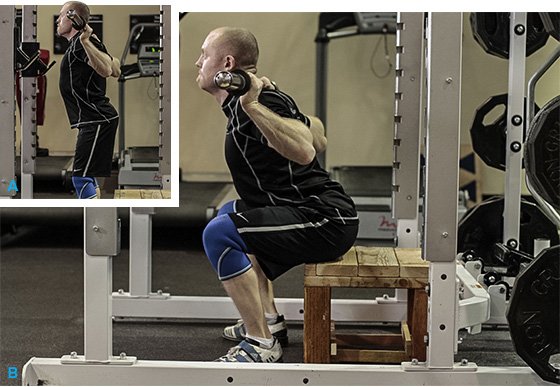 To help people hit depth, I use box squats to keep them honest and groove a rock-solid squat pattern. After taking anthropometrics like limb length into consideration, I suggest most people start with a 14-15 inch box height. The concept is simple: If your butt doesn't touch the box, you didn't hit ample depth.

Todd Bumgardner: Stabilize the Back

The squat is an easy exercise to butcher because there are lots of moving parts and mobility requirements stacked with requisite stability. The complexity of the movement can scramble the process and leave the upper back vulnerable to tightness and injury.

Picture this: As you start your squat descent, your hips glide backward with control and your knees show no sign of caving. Everything feels on par until your depth approaches parallel. Then, without warning, you collapse forward into a grotesque hybrid between a rounded-back squat and a good morning. This causes the exercise to go disgracefully awry.

The unfortunate truth played out in the above scenario is that upper-back tightness wasn't sufficient. Descending into the bottom squat position requires a somewhat upright posture.

Tension built by the lats and the upper-back musculature keeps the spine rigid while squatting. If you lose tension, you bend forward and expose your upper back to injury.

Creating a lower-back arch while squatting has been dubbed the most important back attribute, but this conversation has led lifters to overemphasize their low-back arch without concentration on the rest of their back and spine. It's a foolish error.

The lower back must be set in the neutral position so it works in conjunction with the hips. Set it at neutral and hold it in place with full-back tension by aligning your elbows under the bar and squeezing the bar as hard as possible.

When you set tension, pull the bar into your back by squeezing the lats. This will create a solid resting place for the bar and a spine stable enough to keep the load on your hips and legs. 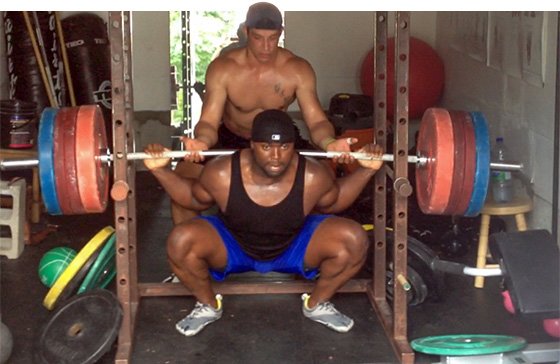 Failing to hit depth consistently is the worst mistake a squatter can make. The best way to avoid this fault is to start squatting with bodyweight or a lightly loaded bar.

This helps you engrain technical patterns important for mobility and flexibility so you can hit proper depth with a flat spine. Repeating this process helps the body adapt to the desired position because the posterior chain muscles learn to fire hard.

Many people treat the squat as a way to activate the posterior chain muscles, which technically can be done by squatting above parallel with proper hip drive, but this is largely ineffective.

Failing to at least hit parallel won't involve enough knee flexion to see results and deprives the spine of strength because it won't bear loads over a large range of motion.

A byproduct of shallow squatting, even if the technique is "good," is that certain muscles get loaded more than others. The lower back and hip flexors will become tight and you'll lose hip mobility. If you continuously squat shallow, the mountain you'll have to overcome will grow ever larger.

Dean Somerset: Fire from the Feet

The inability to sit back and the propensity to roll up on the balls of the feet are major impediments to a good squat. When your heels leave the ground, your balance is compromised; this causes the knees to drift forward and increases anterior shear forces.

As a result, glute activation is reduced. The forward-leaning position also increases knee pain at lower depths as the quad tendon stretches and the load becomes much harder to handle.

The goal is to create the strongest support base possible while squatting. This involves using the entire foot and driving through the greatest point of axially loaded stability, which is toward the heel.

A balanced starting position allows you to generate more power and hoist more weight so you become bigger and stronger. It will also take pressure off your knees and help you stay healthy for longer.