Inspired by the incredible physiques in Oxygen magazine, Sansarae decided to sculpt her own. Learn how this Naval officer built a stage-ready figure!

How Did You Get Started?

While stationed overseas in Manama, Bahrain, I read Oxygen Magazine religiously to help inspire me to get to the gym as it housed dozens of challenging and fun workouts to try. Each month that I received the magazine, I would quickly turn to the back, and read the latest article featuring pro figure and bikini competitors, and ogle over their amazing physiques. About 4 months before the end of my year-long tour, I decided I wanted to become like one of women in the back of the magazine.

The time that I wasn't in my office and not in the gym, I would research each young woman whose physique and accomplishments I admired and envied. I soon decided that I, too, wanted to become a figure competitor and an Oxygen magazine model. Living in Bahrain afforded me the time to make the gym my second home. I almost instinctively grabbed my gym bag, and moved in. I took on the exercise suggestions and food menus in the magazine and started my journey of transforming my body.

Starting out at 178 lbs, I was in decent shape for someone who is 5'10" tall, but I aspired to share those really tight abs, glutes, and get those killer shoulders that every woman that graces Oxygen has. 5 short months later, I was standing on a stage in Pittsburgh, Pa, in clear 4-inch heels, a figure suit a bit more snug than I wanted it to be, and a smile a mile wide. I had made the very first step in reaching my goal. I stepped on stage for the first time at 154 lbs.

I had no idea what my body could do and what it could look like. My perspective on what "fit" and "healthy" were changed suddenly and fitness was no longer just a hobby, but a way of life. Currently out of season, I maintain my weight between 159-161lbs. 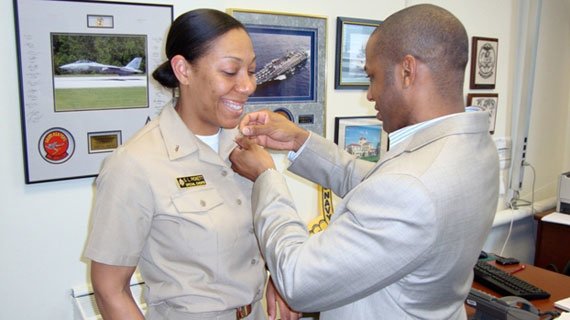 Sansarae built broad shoulders, but she's always had the grin to match.

What Is The Hardest Part Of Making The Transition From Civilian Life To Military Life?

The hardest part about joining the Navy was not really knowing what to expect. While in high school, I pledged to myself that I would go to college no matter the cost or perceived difficulty. While researching schools on the East Coast (I'm originally from Portland, Oregon and figured leaving for college was the best way to see what the rest of the US was like), I stumbled across military academy's that functioned just like 4-year undergraduate programs, but with an intense military aspect.

Without anyone in my family having gone to college, or been in the military before me, I took to learning everything I could about this "free" education, the various service academies offered. One month after my high school graduation, I reported to Newport, Rhode Island as a Midshipman candidate. In 10 short months, I would be reporting to the United States Naval Academy, future graduate of the Class of 2006.

Even though the military was not a life-long dream, and I didn't really have a clear description of what I wanted to study, or even do in the Navy as a commissioned officer, I did know that serving my country and training among some of the brightest, strongest, most determined students from around the country was a great honor.

Getting a grasp of the 5 basic responses (Yes ma'am/sir, No ma'am/sir, No excuse ma'am/sir, I'll find out ma'am/sir, and Aye Aye ma'am/sir) was my first awakening to what I had really signed up for, but training among 1200 other Midshipmen just as terrified, nervous, and excited as I was about the unknown made the transition less daunting. I must say, it helped having a mom who did her best to show her support, despite the scare of September 11, 2001 (while at the Naval Academy Preparatory School in Newport, RI.).

Shortly after I reported to the Preparatory school in Rhode Island, she religiously sent me boxes full of snacks, hand written letters, cards for every occasion, and more beef jerky than I ever wanted to see for the rest of my life. My mom couldn't have been more of a support while I was 3500 miles away from home.

What Is The Biggest Obstacle In Leading A Military Lifestyle? 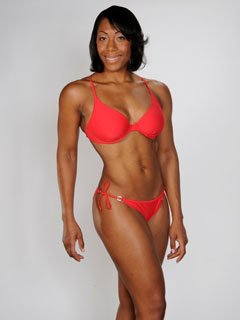 As of this writing, I am 4 months from getting married to the love of my life, in Oahu, Hawaii, 20 November 2011. Gaining a husband, and a son (my fiancé's son is 11 years old), and starting our married life together has made me realize how my lifestyle will affect them and our future children. As a Surface Warfare Officer, I spend a lot of time at sea in a deployment capacity or in a training capacity.

Being the spouse that can be away from home weeks or even months at a time, has forced me to learn very quickly how to balance the commitment to my family and my commitment to my job. Not to mention officers typically report to new commands as frequently as every 2 years. Needless to say, my husband's job, my son's school and friends are just as important to them as my job is to me, but being that they mean the world to me I have to consider dozens of needs and wants. This is a task that can be quite daunting a times.

Thankfully, I have a family who loves, and trusts, my career decisions which makes such difficult choices a bit smoother. We don't see the military as a strain on the family, but rather a privilege. Staying positive about the locations we can move to, new friends we can make along the way, and new experiences we might not otherwise experience, make all this worthwhile. Not to mention, free gym memberships on base make for a wonderful added perk!

I plan to do another figure competition after my wedding in November. Since I have started competing, I have received my certification in Fitness with ISSA (International Sports and Sciences Association).

What One Tip Would You Give Other Bodybuilders In The Military?

There is always room for improvement. Take your workouts to the next level, or try a workout that you've never tried before. We all deserve to be our fittest, healthiest selves, so indulge!