Military life imposes restrictions on its service members, but it also provides men like Keith with the tools they need to succeed on the bodybuilding stage!

Keith took the lessons he learned from aerospace instruction in the U.S. Air Force to create a fitness regimen that transformed his body over two decades. His role in Strategic Command is classified, so just know he helped make the skies safer.

The bodybuilding stage accepts people from so many different backgrounds and physical denominations, but it seems like a military background prepares people differently for the rigors and discipline contest prep requires. Keith Vanderhoeven spent 20-plus years in the Air Force, working most recently as a Space and Missile Professional, so he knows what it takes to dedicate oneself to long-term promises.

Q
How did you get started?

As a young kid, I was obsessed with The Incredible Hulk and was memorized with the muscles Lou Ferrigno had. Ever since the 7th grade I've lifted weights, trying to pack muscle on my skinny 6-foot-2 frame. I was active in high school and had a metabolism like a racehorse, which made it hard to gain muscle. I was that guy who drank the weight gainer, took amino acids and tried anything the big guys in the magazines recommended!

Two years after entering the U.S. Air Force, I started to get serious about training. My work schedule and the facilities on base allowed me to focus on my training. During this time I focused on mass building exercises such as squats and deadlifts, and slowly started seeing the weight packing on! 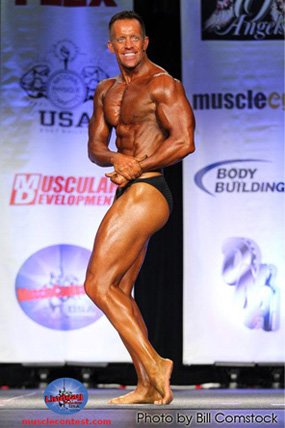 After training hard for two years, I competed in my first competition in 1995 as a novice heavyweight and placed 2nd. After getting a taste of that good placing, I competed in my second and third competition the following year, placing 2nd and 3rd in the same novice heavyweight division. After that I didn't compete again for another 9 years. Then in 2005 I jumped back on stage again placing 3rd out of 15 competitors. This competition was a blast! After a 9-year layoff, I was afraid I was washed up and too old to compete anymore.

My last competition was this past June in the All Armed Forces and Southern California Championships in San Diego. To my surprise, and after another long layoff of 7 years, I placed 4th in both competitions in the heavyweight and novice heavyweight divisions. Once again, getting back on stage ignited a fire inside me to compete again next year with the hopes of winning my weight class!

I can't relate to the transition from civilian life to military life because I went into the military right after high school. The only civilian life I knew of was stocking shelves at the local grocery store and living in a 1-bedroom apartment. However, don't get me wrong, the moment I stepped off that bus at basic training I was scared to death! I never experienced a grown man twice my size screaming and yelling at me for 3 months. Looking back, I would never change a thing about going into the military, because it's like having a separate family and belonging to something special!

The biggest obstacle of having a military career is having limited control of where you go and what you do. What I mean by this is, the needs of the Air Force come first and they assign you where they need you most. This can either be a good or bad thing; you don't always get your first choice of location or job. Moving every 3-to-4 years takes its toll on the family, which is a huge part of any military career. If I step back and think about it, the pros outweigh the cons when it comes to military life. The camaraderie, benefits and job security are second to none! A military career is an awesome way of life!

Keep true to yourself; don't change anything about yourself for the sake of others. Keep your head up, lean forward and stay engaged. Hard work and determination pays off whether it's your personal or professional career goals!