Kettlebell Snatching On A Warrior Diet!

This article centers around a method of kettlebell snatching and nutrition that will achieve the following: rapid fat loss, mental toughness and strength.

If you are adverse to pain, like trying to take the easy way around things, and don't like getting results quickly, move on to that article on how to best rock the leg extension machine. If you're still reading, welcome to my house of pain.

This article centers around a method of kettlebell snatching and a nutritional plan that will achieve the following:

First we will look at the snatch protocol. This is referred to in the kettlebell community as a Max VO2 Workout. It is an even interval protocol snatching first on one hand, pausing, then the other, pause, repeat.

When performing the 15-second protocol you are shooting for between 6 and 8 reps per 15 seconds with a 16kg kettlebell for men, and a 12kg kettlebell for women. Heavier kettlebells can be used. For the 15/15 protocol I use a 20kg kettlebell, but you need to know your limits, and start at the bottom. You do not want to get injured.

One thing I neglected to mention is that the 15/15 goes on for 25 minutes. So if you are hitting 6 reps per cycle you are doing a total of 300 snatches over the course of 25 minutes as you will be doing 50 total sets. 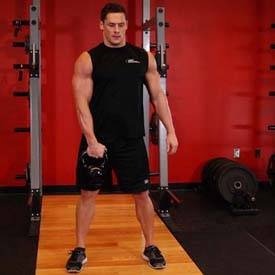 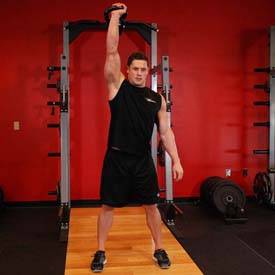 Once you are snatching faster (8 reps per set) you will be up to 400 snatches per workout. There's no real reason to go faster than that. When you cruise through 8 reps per cycle it's time to push up to the next heaviest kettlebell.

This is a lot harder than it looks on paper. Your brain will want to quit before your body does. That is where building the mental toughness comes in. I find it helps to do this protocol with a partner, or somewhere that people can see you, and will know what a p*ss you are if you quit.

Most likely you are not going to just be able to burn through this workout the first time. Even if you think your cardio is good, it's probably not as good as you think it is. I've done marathon length runs, tire pulling, humped a 70-pound pack over the mountains at Camp Pendleton, and this is worse, at least in the beginning.

So how do you work up to it? From my experience working with clients I have found the best method is to break it up into 5 minute blocks. Do these 5-minute blocks of 15/15, taking a short break between each to recover. Track your breaks, and as you continue over the week tighten them up until you don't need a break anymore. Then bump your reps up to 7 as you get stronger.

How Is This Going To Build Muscle?

Many of us have had it drilled into our heads by the bodybuilding magazines that you can't build muscle, burn fat, and build endurance at the same time. I call bullshit. This is because most people's conception of 'cardio' revolves around one common precept- It's plugged in.

Cardio such as running, cycling, treadmill, etc. all have one thing in common. You are not loaded with any external resistance. Well of course you're not building any muscle or strength, how could you? You are pushing the same load over and over and over, never increasing resistance.

All of these involve resistance and have made me stronger. Tire pulling definitely put some meat on my bones and made my legs much, much stronger. How? You're pulling a big @ss tire for three miles. All of these events will also get your heart pumping like crazy.

Most likely you will not be using this protocol for a while as it is an @ss kicker. This was developed by Kenneth Jay Senior RKC at the University of Copenhagen in Denmark. It was compared to other methods of testing and increasing the VO2 Max such as cycling or running, and beat them. Why? What do cycling and running lack? Again, varying external load and virtually any upper body engagement. The kettlebell snatch works everything, making it more efficient.

Some do not like this protocol because it requires you to snatch much more in one cycle, and if you have any hand issues this can create a problem. I will explain more about hand care later in this article. My snatch record for 36/36 with a 16 kilo is 18 reps per cycle, so I am snatching like a bat out of hell for 20 sets.

As 36/36 does not split evenly into minutes it is best to use a timer such as the gymboss that you can use to set weird intervals.

If you are interested in pursuing this method check out this blog post from Mark Reifkind Senior RKC's blog on the 36/36 protocol.

Snatching a kettlebell causes friction in your hand. This in turn causes blisters, calluses and tears. We want to avoid this damage so that you can effectively snatch without worry.

First is caring for your calluses. The best method for doing this is shaving them down with a pumice stone or some other implement after you shower or bathe when they are soft, and then applying a hand lotion.

You want the calluses flush with the skin of the hand so that they do not catch on the kettlebell handle and get ripped off. Throughout the day I apply a hand lotion such as Corn Husker's lotion. Corn Husker's can be hard to find, but is well worth the effort.

Now, we also want to avoid that nasty friction. The best way I have found to do this is instead letting the handle rotate through your palm on the way down, you drop it away and re-catch it in the hook of your fingers. Check out this below video for a better explanation of this technique.

Just doing the Max VO2 snatch protocol is going to burn more fat than anything else I've found. However, why not maximize our benefits by locking in the nutritional component as well? This diet is used by Pavel Tsatsouline, Mark Reifkind Senior RKC, myself and many others.

Since I started the Warrior Diet I have dropped 10 pounds of toxins and fat and I have a high energy level all day long with no lows. I have been plagued by severe nasal allergies for 11 years and have to be on constant medication if I want to breathe, and now they are gone. I am much stronger.

After starting the warrior diet I was able to press the 32 kilo kettlebell, jerk the 40 kilo, do a rock bottom one legged squat, and burn through Max VO2 15/15 with a 20 kilo kettlebell for the first time. It is no coincidence.

You cannot achieve your athletic potential on a bad diet. Your body is like any other machine. If you pour sugar into the engine of your car, how well will it run? Why would you think you can eat processed sugars and refined flours, chemicals and all manner of other nonsense and operate at maximum (or even anywhere close) efficiency?

The warrior diet is nothing new, Ori has just done a great job of explaining it in his book. Throughout history soldiers on the march and other societies have eaten this way. They had virtually no food during the day, and a large overeating phase in the evening.

How this breaks down for me is that I start off the day with a vegetable juice composed of cucumber, spinach, carrots, chard, kale, etc.

Throughout the day I'll do some light protein (kefir, yogurt, etc.) and another veggie juice, then some fruit juice as well. Everything is organic and lacking any additives such as processed sugars. In the evening it's time to eat. My evening meal lasts 2-3 hours of on and off eating as this is where I get most of my calories.

One of the best parts about this for myself is that it's easy to plan just one meal a day. Due to a busy schedule it would be hard for me to plan 3-5 or more healthy meals a day.

If you like the sound of the results I got with this I encourage you to get the book and actually read it, don't try to wing it based upon what I have written here.

This is where the rubber meets the road. If your goal is to build giant biceps and a large chest, you don't really care about being as strong as you look and could give a crap about cardiovascular health and endurance, then go with God, this is not for you.

However. If you want truly elite-level cardio, low body fat, true functional strength and a mental and physical work capacity that put others to shame, this is your solution.

Jordan Vezina is a professional fitness trainer with a focus on combat conditioning and tactical fitness living. He will be covering fitness training.