Get Huge Hamstrings! Don't Ignore Them.

Let's be honest, any back pose isn't complete without having your hamstrings up to speed. Get some great ideas right here about building up your hamstrings.

We show you the exercises you need to do to build a pair of huge hamstrings.

Great hamstrings are something that every hardcore bodybuilder wants. Let's be honest, any back pose isn't complete without having your hamstrings up to speed. Have you ever been to a bodybuilding show where a competitor with no leg development has won? Didn't think so.

Want a dominating side chest pose? Have a look at Team MuscleTech star Branch Warren. Would Branch's side chest be as impressive if he didn't have those huge hams hanging down there? As Branch shows, hamstring development is a sign of a bodybuilder who has done his homework. 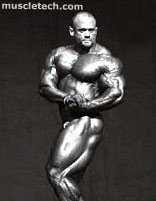 But having great hamstrings isn't just for looking pretty on stage. If you're looking to have any sort of athletic ability at all, having a dominating posterior chain, including strong hamstrings, will ensure that you're not simply "all show and no go" when it comes to running, deadlifting, and squatting.

Yet hamstrings are often neglected - paired unfairly on training days with quads and left to a few sparse sets of curls. This can lead to problems including muscular imbalances that lying leg curls alone will not address. So what's the solution? First, know your anatomy as it comes in handy when training hamstrings.

The hamstrings are actually comprised of three separate muscles: the biceps femoris, which combines with the semitendonosus and the semimembranosus to form your hamstrings. Why is this important? Because the hamstrings muscle are designed to peform two main tasks:

Surprisingly though, exercises for hamstrings are often limited to curls, which while they can be effective along with exercises training the hamstrings as a hip extensor, won't give you the results that you're after all on their own.

Grab a serving of Thermogain and let's hit the gym armed with these hamstrings exercises.

The classic Romanian deadlift should be the cornerstone of your hamstring routine. Master it and you'll be well on your way to mastering the size game. This is one hip-dominant exercise that gives you much of the same full-body benefits as squatting. Remember, there is a difference between Romanian deadlifts and full deadlifts. Romanian deadlifts do not require you to set the bar down on the floor between reps. Lower the bar to just below your knees.

Here we go with the curls! Okay, but these aren't the more commonly seen lying hamstring curls. The difference between these curls and your everyday garden variety lying hamstring curls is your ability to focus on each leg. Unilateral exercises allow you to prevent a dominant body side from leaving the weaker side behind in terms of gains and helps to reinforce neuromuscular coordination, which can help with balance and power.

Good mornings are an exercise that isn't seen as often as it should in the gym. Not only do these strengthen your hamstrings, but they're also great for the entire posterior chain, which includes your lower back, and glutes as well as your hamstrings.

Remember to keep your knees bent slightly to put more emphasis on your hamstrings and not your lower back.

Now this one is the toughest exercises you'll ever do, but does it ever work! Glute-ham raises can be performed on a glute-ham raise machine (as shown), or on the floor with the help of a partner who will hold your feet down.

Generally, if this is the first time you've done this exercise, ensure you have your training partner with you.

Putting It All Together

As is normal with a lagging bodypart, or a bodypart you'd like to specifically bring up, you have to give hams their own training day. Hamstrings are no different.

If you find you're unable to give hamstrings this sort of priority in your routine, you could also try hitting them before training quads on leg day.

Hamstrings consist mainly of fast-twitch muscle fibers. These types of fibers respond best to a lower rep range. This routine will have you doing 4 sets of exercises in a rep range of 6 to 8.

Perform the exercises with a weight that will allow you to keep your form strict (especially Romanian Deadlifts and Good Mornings), but will still be challenging enough so that you cannot do more than 8 without breaking form.

Hamstrings are not the most glamorous muscles in the bodybuilding world, however they're arguably some of the most important. Not only are a great set of wheels completed with a pair of humongous hamstrings, but sports that require running like football and baseball require superb hamstring strength and development for optimal performance.

Give hamstrings the attention they deserve and a well-balanced, strong, and functional body will be yours!