Fitness 911: 6 Super-Fit Men And Women Who Serve And Protect

For these six men and women, fitness is a calling, a lifestyle, a sport, and a survival strategy. Learn from people who risk their lives to protect ours.

As Officer Daniel Banks tells it, every bar in America is littered with guys who think they're MMA fighters because they watch it on TV while sucking down beers. But the police chief in Tripoli, Iowa, knows all too well that not every adversary is a big-talking wannabe. He takes no one for granted.

"Many prison inmates weight train two or three times per day, 365 days a year," says Banks. "When they're released back into society, I may encounter them in a criminal situation. So when I go to the gym, I train as though I'm fighting for my life."

The truth is that public servants like Banks are fighting for our lives, not just their own. They battle criminals, natural disasters, and manmade calamities so that we can sleep at night and work out when we please. They plan for the unplanned and think about the unthinkable. Police officers, SWAT members, federal agents, firefighters, and paramedics are the saviors we need most when we expect it least.

We've all heard about emergency moms who can lift a ton without training to save their babies. But the public servants who see tragedies frequently can't rely on such once-in-a-lifetime feats of strength. They need fitness that works around any excuse, overcomes any hurdle, and is every bit as strong as it looks.

Meet six everyday heroes who are up to the dual challenges of destroying workouts and preserving society. Ride along with them, and learn what "functional fitness" is all about.


A 10-year police veteran, Banks says he'll do whatever it takes to apprehend a suspect. He can back this attitude up with years of hard work pushing heavy iron in the gym. The results he's been able to achieve have been impressive enough that he placed fourth out of 60 competitors at the 2010 "Muscle & Fitness" Model Search, his first and only contest. The 34-year-old, who stands 6-foot-4 and weighs 275 pounds, now represents Optimum Nutrition as a sponsored athlete while continuing to fight the bad guys. 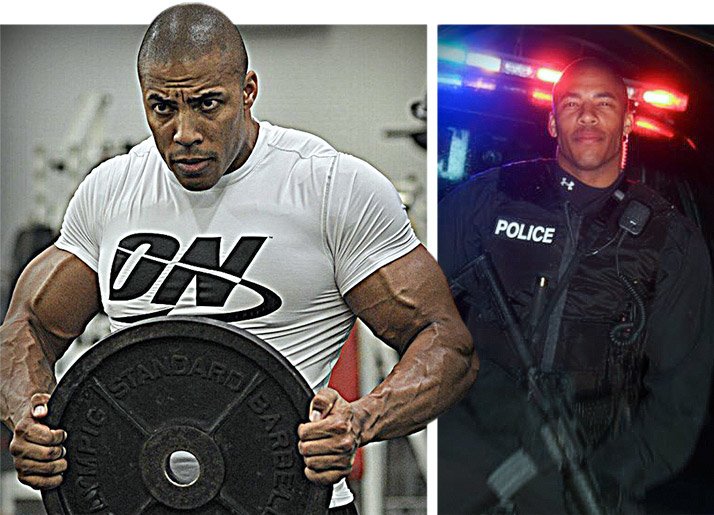 What's your biggest challenge as a public servant and athlete?

"Finding time to get to the gym, let alone get in a full workout. After a 40-hour workweek, it doesn't matter if you're at your daughter's first birthday party, church, on vacation, in the middle of a workout; you can be called away at a moment's notice, 24-7. Then there are court cases and appearances, interviews that may have to be scheduled around what works for the suspect or victim, community projects, and so on. I find that I'm often the last guy to leave the gym as a result of these demands, but I still love my job and I love working out."

Workout tip: "Make the most of the limited time you have by focusing on the quality of each repetition, not just how much weight you can move. In addition, slow down your movements to work on both the concentric and eccentric parts of the repetition."

Sandy Avelar has time for everything but excuses. She does great work, looks great doing it, and still makes time to volunteer. She's been doing police work for 15 years, including her current stint as a gang detective and riot squad member in Vancouver, British Columbia. The 5-foot-7, 130-pound stunner is also preparing to compete in several IFBB Pro Bikini contests this spring and summer. But even with these demands, she still finds time to sit on the board of directors of the Boys Club Network for at-risk youth. 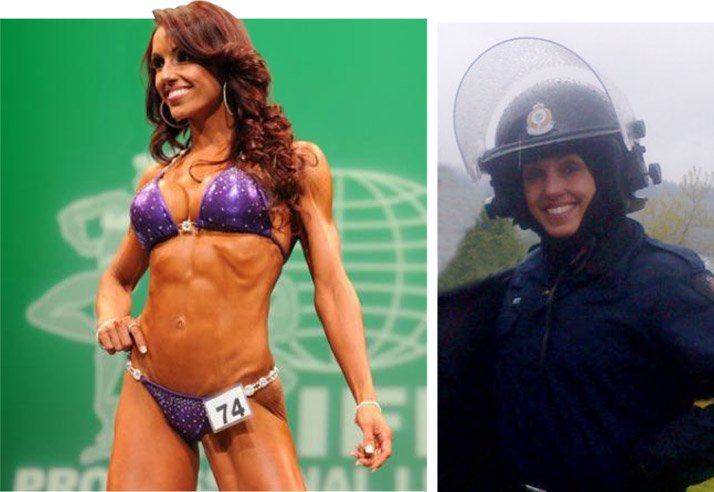 How has being a police officer made you better in the weight room?

"I've been a police officer for many years, so I've learned many lessons. Number one is that quitting is not an option. If I quit on the street, it could mean serious injury or death. I take the same approach in the gym. When I think I have nothing left, I push a little more. Even when it feels like I have nothing left to give, there's always more deep inside me."

Supplement tip: "Bring your protein shake to the gym and drink it before you leave. Your workout isn't done until you've had it. And don't be content with choking down a flavor you don't like. My favorite powder is I-PLX Protein by Precision. It mixes well and isn't gritty."


You're trapped in your car after an accident, badly injured, hoping someone can save you before your life goes up in flames. You need a strong, capable emergency worker like Tamika Webber, a paramedic and figure competitor from Melbourne, Australia. Webber teaches advanced life support to fellow paramedics, but is also a tireless competitor who most recently placed second in the tall class at the IFBB Nationals in 2012. 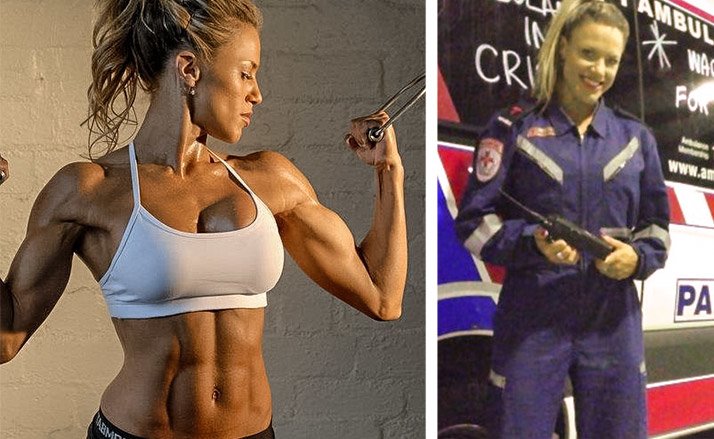 What has working in emergency services taught you?

"To never take my health for granted. You are never too young or too old to make changes to your health. I learned more from one day on the job as an emergency paramedic than in the seven years I spent at university studying anatomy and physiology. Today, I work with obese patients, cancer patients, partygoers who OD, the elderly, and I take away lessons from all of them. There's nothing like the seeing the effects of illness, much of it avoidable, to increase your own drive and determination in the gym to become fitter. Train hard!"

Motivation tip: "I follow the adage that reality is the mirror of your thoughts. The more you put in, the more you get out, and that includes fitness. There's no quick fix or magic potion to achieving your goals overnight. Rather, you must set small achievable goals and stay focused on them."

You're depositing your paycheck at the bank when suddenly you hear shouting and find yourself staring into the business end of a gun. You best hope may be SWAT team members like Joe Palumbo.

A 24-year police veteran, Palumbo is now a member of a SWAT team in New York. He's also been an IFBB professional bodybuilder since 2001, bringing his 5-foot-7 frame down from 250 pounds off-season to less than 220 for contests. For good measure, he's a certified Navy Seal fitness instructor and the director of physical performance for Infinite Labs. 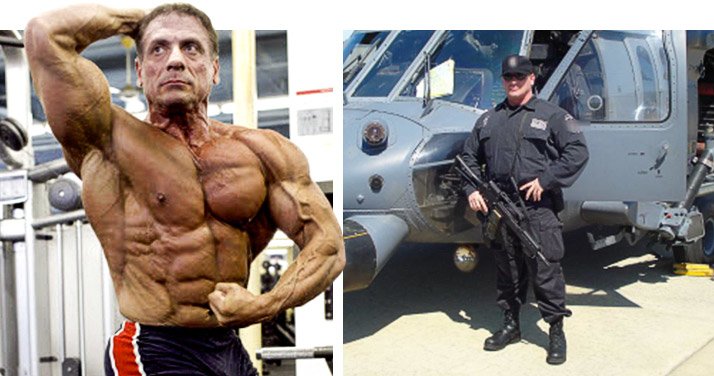 How do you balance SWAT obligations with your fitness goals?

"SWAT and fitness are both 24-7 pursuits. We are a group of dedicated, highly trained, highly motivated officers who are on call 24 hours a day, every day of the year. We must be ready and prepared for a call-out on a moment's notice.

To also be truly dedicated to fitness—and in my case, bodybuilding at a pro level—there is no room for, 'Oh, I'll just skip today.' Because of my tactical training mentality, I always plan ahead and have a backup plan for my training and nutritional needs. All my meals are prepared hours in advance, and I always have enough for a 24 hour-span. Honestly, I wouldn't have it any other way."

Workout tip: "When it comes to training, technique and approach are as important as exercise selection. Tearing down your muscles should only take a short time. One of the best ways to rip up your pecs quickly is to work to muscle failure."

Mike Kurzeja has an 18-year background in law enforcement and now works as a federal agent for the U.S. government, but his title might as well be "Certified Badass." The 5-10, 168-pounder has been boxing for 25 years. He went undefeated as a super-middleweight, but he has also weighed in as a light-heavy. This father of five boys and Optimum Nutrition-sponsored athlete is undoubtedly one of the toughest customers in the quiet town of Downers Grove, Illinois. 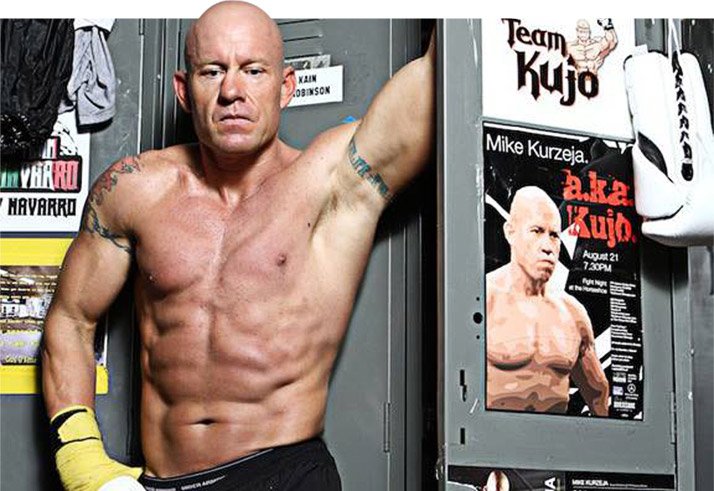 Agent, father, and fighter—how do you keep it all together?

"I have a schedule that can vary from day work to afternoon work to midnight shift work at a moment's notice. In addition, I sometimes travel, which means I can't always work out at the same place. As a result, I have to be flexible and adapt my workouts to different times and different places. Where there is a will there is a way, though. I don't miss workouts, and worst-case scenario, I can always do a core bodyweight workout in a hotel room or run outside if a gym isn't available."

You wake up at 2 a.m., choking on smoke because the wiring in your home has caught fire. The better conditioned the firefighters coming to your rescue are, the better your odds of survival. And few are better conditioned than Nadine Young, 33, who has been extinguishing flames for almost 10 years in Toronto, Ontario. The 5-foot-5 Young is a top Canadian figure competitor and fitness model, as well as a personal trainer, nutrition counselor, and the owner of a tiling business. 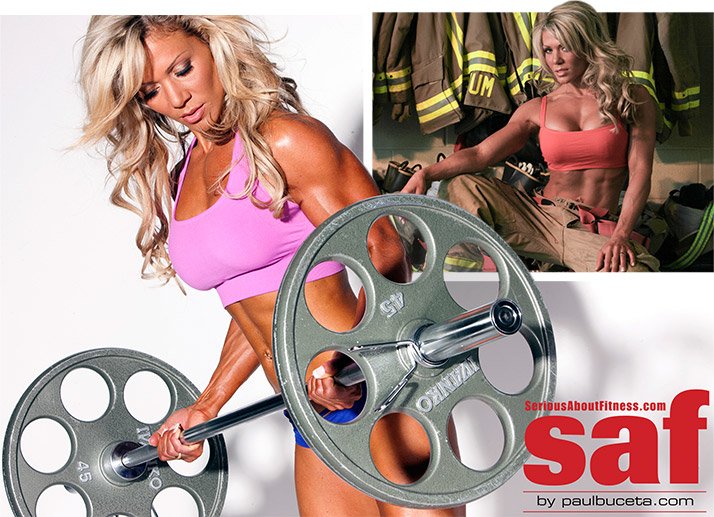 How do you juggle your public, private, and professional obligations?

"The never-ending rotating shifts take a physical toll, and the lack of normal schedule often makes it tough to do many of the things that non-shift workers consider to be normal. Much of the social aspect of on-duty crew life revolves around crew meals and, given that my lifestyle demands far different food choices than most people are interested in or prepared to make, I often find myself having to fend for myself during meals. But in the end, when you weigh all the plusses and minuses of working in the fire service, I wouldn't change a thing."

Workout tip: "To make the most of the limited time you have, get creative and use movements that really get the job done. I complete my biceps workout with a peaking movement, curling a bar attached to a cable on a preacher bench. The preacher bench forces the rest of my body out of the equation. This is one of my favorites, especially pre-contest."