There's no tougher foe than a raging wildfire. Load up your pack, gain some elevation, and try the workout favored by the ''Hotshots!''

In the wake of the tragedy in which 19 "hotshot" firefighters lost their lives fighting a wildfire in the hills of Arizona in June 2013, I, like many people, was left with questions. The first one, I'll admit, was: "What's a hotshot?" Perhaps because I've lived in Boston my entire life, I had never heard of this particular type of wildland firefighter. However, a little research showed me that these are tough men and women after my own heart.

Interagency Hotshot Crews, or IHC, are elite teams of firefighters who battle some of the most dangerous and remote wildfires in the country. While they generally start out on regular engine crews or hand crews, hotshots progress to the elite echelon of their field by showing a high level of ability and dependability. If I had to relate it to my own professional background, I'd say it's the difference between a squad of police officers and a SWAT team.

Hotshots put in long hours under hazardous conditions. The work is physically demanding and tedious, and the heat of the summer sun is only compounded by the fire threat. Dehydration is a constant combatant. Crews often spend weeks living out of tents or makeshift fire camps, all for about the same earnings of your local firefighter.

Hotshots aren't in it for the money, though. They do it for the challenge, the adventure, and the experience of a lifetime. They do it because they the love the hard work, they love the great outdoors, and they thrive on the feeling of camaraderie only felt on an elite team.

These are strong people, and they build that strength by hard work out in the real world. Read on to see if you have what it takes to carry their canteens. 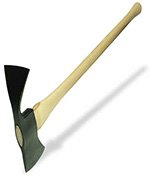 Q
What Do Hotshots Do?

A hotshot crew consists of 20-22 members, all of whom pass stringent physical and skill tests to earn their position. While their precise duties are unpredictable, the basic job of a hotshot crew is to cut a firebreak ahead of a wildfire to keep it from spreading.

Hotshot crews specialize in cutting firelines. To accomplish this, 1 or 2 "saw teams" will begin line construction by clearing a six-foot-wide fire break. These saw teams are led by a sawyer, who operates a chainsaw and cuts down everything in his path. His partner is the swamper, who picks up and throws everything the sawyer cuts down. The rest of the crew is made up of scrapers. They follow the leads with hand tools.

The hotshot's tool of choice is a pulaski, which is a combo of an axe and a heavy hoe blade. They use it to scrape a three-foot-wide path down to bare ground. This work is brutal on the forearms, delts, lower back, and core. It's not unusual for a crew to work non-stop for 12-16 hours, and they can work for 14 consecutive days before their mandated two-day break.

Chin-ups based on bodyweight

To qualify for a hotshot crew, you've got to be more than just a solid firefighter. You also have to pass a set of strict physical requirements set forth by the National Interagency Fire Center. Every hotshot is required to pass this test prior to becoming part of the crew, and then again at the start of each wildfire season.

The standards are a variation on the Cooper Standards for law enforcement, but I like the fact that unlike many other agencies, hotshots don't have different standards based on gender and age. The standards are the same for every hotshot across the country.

I've had to pass a segment of the Cooper Standards each summer for the past 15 years, so these types of numbers aren't new to me. I'm confident I'd meet the sit-up, push-up, running, and chin-up marks, but a 3-mile hike with a 45-pound pack was new to me. Always curious about how my police training compares with other disciplines, I recently threw two 25-pound plates in a backpack and gave it a try.

The first thing that hit me was that a 50-pound pack felt heavier than I anticipated. I hadn't walked far before that extra weight put a lot of pressure on my feet. I was trying to walk fast, but I hit the first mile mark just seconds under my target pace. I needed to pick up speed, but I was sweating, my breathing was labored, and I found myself leaning forward under the weight of the pack. I finished the walk at 43:59, walking as fast as I possibly could. This was not an easy event, although I suspect it would favor taller people with a longer stride. 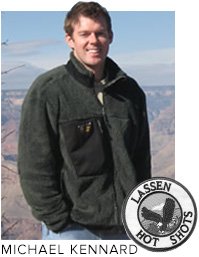 A View From the Fireline

Inspired to see how actual hotshots prepared for their work, I reached out to Michael Kennard, founder of Hotshot Fitness. Inspired by a craving for adventure and a desire to serve his nation, Kennard started his fire career with the Feather River Handcrew (now the Feather River Hotshots) in Northern California. After two tough and inspiring seasons, he accepted a position with a hotshot crew hosted by the Lassen National Forest.

The Lassen Hotshots are a highly skilled team available for emergency deployments nationwide. During Michael's time with the crew he fought fires throughout California, Utah, Nevada, Colorado, Idaho, and New Mexico. Once at the base camp, the crew would generally hike into the fire zone, but once in a while they would be airlifted, via helicopter, out to the front line. He let me know that the NIFC standards were just the start of what these beasts do to stay ready for action.

This is unique work. What sort of strength does it demand?

Unlike fighting structure fires, where brute strength is paramount, the physical demands of wildland firefighting are vastly different. You're not going to be carrying a 200-pound man down a flight of stairs and out of a burning building. No one on the crew gives a crap "How much ya bench?" All they care about is that you can swing a tool all day without bitching and moaning, and then get up the next day and do it again. If you look at most hotshot crews, you'll see a lot of slender builds. Excessive muscle mass doesn't get you anywhere. It just slows you down. 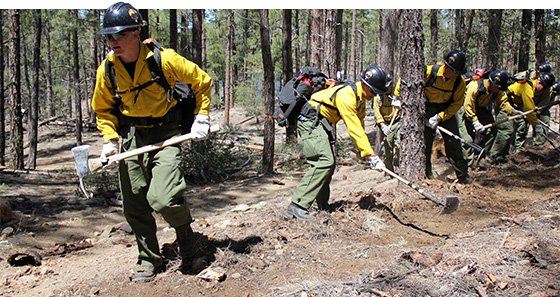 Unlike fighting structure fires, where brute strength is paramount, the physical demands of wildland firefighting are vastly different.

What does a hotshot crew do when not fighting fires?

We always start each day with 90 minutes of PT. While PT routines will vary from crew to crew, my experience was that we alternated hiking and running each day. Hikes weren't leisurely strolls through the woods; they were usually 1-2 hour rucks straight up the side of a mountain. On days that we ran it was usually 4-6 miles. Most days that we weren't on active wildfires were spent performing various projects around the forest or doing general maintenance work around the station.

What is the toughest part of the job?

When you're actually fighting a fire, the almost unbearable conditions seem to have no end. After a few hours of working in 110-degree heat with no shade, you may start to think that there's no way you can finish the day, but you know that everyone else on your crew is suffering too. You just push through it for the guys on either side of you. If you go down, they'll have to pick up your slack. When you're in the middle of nowhere punching in line, you can't just jump in your car and go home. You take another big swig of hot water, you deal with it, and you keep going.

What type of training would prepare someone to work as a Hotshot?

In the hotshot world it's all about endurance and stamina. Your program should be built around running, hiking, and circuit training. All crew members need to train to a high standard, because failure to do so could endanger the entire crew. On a big campaign fire, the crew might work an initial 24-hour attack, rest for a short time, and then continue on with 16-hour shifts. Some days the crew may need to "ruck it" for more than an hour just to reach our work location.

You carry in everything you may need for that day, including up to 2 gallons of water. On any given day you may be battling fire down in a heat-scorched valley or gasping for air on a fire 6,000 or 7,000 feet above sea level. These factors take their toll on your aerobic capacity, and you don't want to be the guy who can't hang with the rest of the crew. 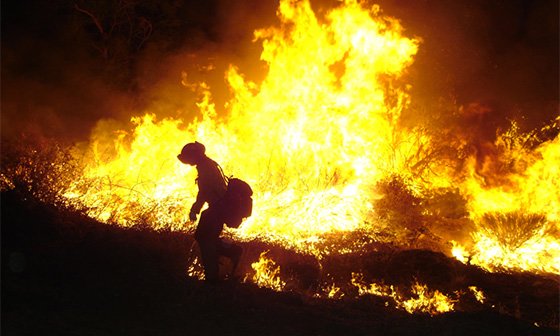 You need to move fast across real-world terrain and combine that with resistance work.

Can this type of training be done in a gym?

It could, but I wouldn't recommend it. Most hotshots agree you need to be climbing mountains and running trails. You just can't replicate that indoors. You need to move fast across real-world terrain and combine that with resistance work. For example, one of my favorite workouts is called the "Hotshot 500."

Load a backpack with as much weight as you think you can handle. Map out a 1-2 mile trail that peaks at about 1,000 feet of elevation gain. Start your ascent, and at various locations, stop and perform your exercises, using your pack as the weight. Without resting, continue on with your hike until you stop again for more reps.

You can decide which exercises and how many reps you will do at each location, but complete all the prescribed reps for each exercise by the end of the hike. See how much time it takes you to complete the entire routine, and then challenge yourself to complete it faster the next time or add more weight to the pack.