Nutrition/Training expert & bodybuilder Clarence Bass has, for almost 30 years, made it his job to inform and educate... In the following interview he discusses his long career, how we can improve our health through bodybuilding and more.

As a nutrition and training expert, bodybuilder Clarence Bass has, for almost 30 years, made it his job to inform and educate all who seek optimal health and a magnificent physique.

A prolific author and designer of the unique Ripped system of training and nutrition, Clarence is one man who truly practices what he preaches, as exemplified by height class wins at both the 1978 past-40 Mr. America and 1979 past-40 Mr U.S.A. and the ripped-to-the-bone appearance he maintains year in and out.

While many argue that optimal conditioning and adherence to the kinds of training and nutrition strategies that create such a state are next to impossible to maintain, Clarence shows that this path is not only achievable but also desirable.

Born in Albuquerque, New Mexico, Clarence, a trained lawyer who retired from legal practice in 1994, has for the past 13 years devoted his life to studying and writing about the fitness lifestyle, an interest he has had since he began lifting weights at age 13. Clarence first gained notoriety as an athlete after winning his first athletic award in 1954, when as a junior he won the State High School Pentathlon Championship.

As a high school senior he excelled in wrestling, placing second in the State Championship. As he developed physically, Clarence decided to push his muscular capabilities to the limit so beginning his foray into Olympic lifting. Here he excelled also: for over 20 years he would win numerous state, regional and national trophies in this sport; his best Olympic lifts being 275 pounds in the Standing Press a 245 pound Snatch and a 325 pound Clean & Jerk.

He then turned his attention to bodybuilding and the rest, so they say, is history. Over subsequent years Clarence would feature regularly in Joe Weider's Muscle and Fitness magazine, where he would also have his own column. As well he would write his successful, widely read, series of Ripped books and inspire a nation to devote their lives to health and fitness.

An articulate and intelligent spokesman for the sport of bodybuilding, Clarence, as one of us, has redefined the iron game as a health pursuit. As one of the first men ever to attain a sub-three percent body fat measurement Clarence, today at 69, and as Ripped as ever, still trains regularly and with great intensity.

In the following interview he discusses his long career and gives valuable insights into how we can all improve our health and fitness through bodybuilding.

[ Q ] You have been described as the most articulate and well-read spokesman in America for an all-round fitness lifestyle. What would you say your biggest contribution to health and fitness has been since you began in the industry?

[ A ] Probably showing that you can stay lean and fit for years on end-and still live a normal and productive life.

[ Q ] Your many books have inspired people of all ages to reach their physical potential. What are some of the main messages you try to get across?

[ A ] That enjoyment is the key to staying motivated. No one will train or eat for long in a way they don't enjoy-and it's not necessary. Sensible exercise and healthy eating can and should be a joy.

Making progress toward a meaningful goal is the most rewarding and enjoyable thing you can do. You can always find ways to improve; use your imagination. Once you stop challenging yourself, it's over; you're toast.

[ Q ] What projects are you involved in these days?

[ A ] I'm working on a new book; I just finished chapter five. I've already written eight books, so it's hard to find meaningful new things to write about. My last book, Challenge Yourself, was published in 1999; and it's taken a while to accumulate enough material for a new book.

Each book has been different; I try never to cover the same ground again. (Some repetition is inevitable, of course.) Fortunately, as I get older and continue to train I find new challenges and learn new things, most of which apply to young and old. That's what the new book will be about. 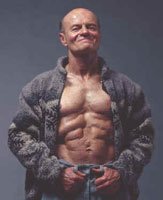 [ A ] I learned a lot preparing for those contests; I tell about what I did right--and wrong--in my first book, Ripped. My basic diet principle was (and is) to avoid concentrated calories; eat foods that fill you up without giving you too many calories. Whole foods with nothing added or subtracted do that best. My training philosophy, then and now, is that "less is more." I believe in hard, infrequent, and progressive training-weights and aerobics. It's better to do too little than too much. I also walk on off days, then and now, to burn calories and speed recovery; but I don't approach walking as a workout.

[ Q ] So you find a less-is-more approach suitable as you age, as your metabolism slows? Is your diet the same also?

[ A ] Yes. I eat a balanced diet of whole foods. My training is an equal balance of weights and aerobics. I always challenge myself to improve and avoid over-training. I enjoy my training and never miss a scheduled workout.

[ Q ] As we become more knowledgeable about health and fitness, how we view diet and training tends to change. How has your approach to diet and exercise evolved over the years?

[ A ] I've gotten a little smarter and wiser, but the basic principles haven't changed. I had my right hip replaced a little more than a year ago, which required some adjustments.

I've written an article about it on our website (www.cbass.com) called "Miracle in Houston " (#161 in our Fitness & Health category). It's a long story, with a happy ending. Compare my old and new photos on our "training pictorial" page; you won't see any change in my right leg.

[ Q ] Of the many articles found on your website, highlight the benefits of aerobic exercise. In your view what are the primary benefits of cardiovascular training?

[ A ] Some say that weight training is all you need. I don't agree. Total fitness requires balanced training, strength and endurance. Experts used to tell us that aerobic exercise is all you need for health. That's changed; almost everyone now agrees that we need both resistance training and aerobics to stay healthy.

Simply put, strength training builds and maintains the muscles and bones, while aerobic exercise does the same for the heart, lungs and circulatory system.

In addition, aerobic exercise trains the body to burn fat and conserves glycogen (carbohydrate stored in the muscles and liver). A combination of weights and aerobics does a far better job of keeping us fit, lean and healthy than either one alone.

[ Q ] You have discussed the importance of aerobic exercise for improving brain function. How does it do this?

[ Q ] What are some of the best foods available for maintaining health and wellbeing? Why are they beneficial?

[ A ] Vegetables, fruits, whole grains, lean protein and "good" fat. Basically, that combination supplies the nutrients we need to stay happy and healthy. The details are summed up nicely in article #153, Diet & Nutrition category, on our website (www.cbass.com); the title is "Simple Diet Patterns for Good Health."

[ Q ] In your view, how closely linked are our emotions to what we eat and the effect food has on the way we look and feel?

[ A ] The food we eat does affect our emotions. One key is to keep blood sugar on an even keel; that makes you feel good and helps to avoid eating binges. The best way to do that is to eat regular, balanced meals (I try never to miss a meal) and stay ahead of the hunger curve. Again, eat mainly whole foods and avoid processed foods. 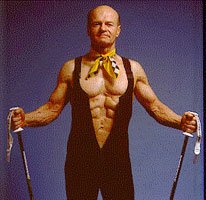 [ Q ] What advice would you give someone who wants to lose weight and feel good?

[ A ] Take your time; it took a while to put weight on and it takes time to get it off. Don't make yourself miserable by biting off more than you are willing and able to chew-diet or exercise. Don't starve yourself or allow cravings to develop. Eat mainly whole foods and exercise, weights and aerobics. Do that consistently over time and you'll lose weight and keep it off-and feel good doing it.

[ A ] One might say that I did it backwards. My body fat was 2.4% the first time my body composition was measured. Lovelace Medical Foundation in Albuquerque (where we live) was doing research to determine the best form of exercise to allow the astronauts to tolerate weightlessness in space.

They were looking for a weight trained athlete and invited me to come for testing. As part of the testing, they weighed me underwater; it's called hydrostatic weighing, and it's the gold standard for measuring body composition. They determined that my body fat was 2.4%, and explained that the average college student is about 15% and men approaching 40, my age, are usually 25% or more.

When I heard that I knew that many people would be interested in how I became so lean; I wanted to know more about it myself. I'd been watching my diet and exercising (first weights, and then weights and aerobics) all my life. In fact, I was planning to enter the Past 40 Mr. America contest when I met the age requirement.

That started me on a decade's long study of the best way to become lean and healthy-and stay that way. You'll find many more details about my diet and training, and what I learned, in Ripped: The Sensible Way to Achieve Ultimate Muscularity (which will enter its 11th printing later this year).

[ Q ] Thank you for you time Clarence. It is good hearing from someone with your level of experience. How would you summarize your career as a health and fitness educator to date?

[ A ] My career as an educator is based on my personal experience as an athlete and the additional knowledge gained from reading widely in the fields of nutrition, fitness and psychology. I started training with weights at about 13, which helped in my athletic endeavors in high school.

I also had an early interest in nutrition (high school) and psychology (college). I have tried to convey what I've learned in the articles and books I've written, in lectures I've given, and in many personal consultations.

Publication of Ripped, the first book, opened the door for me to write a column in Muscle & Fitness magazine called The Ripped Department. It ran for 16 years and became the longest continuing column in the history of the magazine.

We started our website in 1996 and will be posting my 185th online article with our April 1 update. I hope through all of this that people understand that having vibrant health and fitness is an achievable goal for nearly anyone.

My education, beginning with my early training and athletic competitions, and vastly accelerated by my first underwater weighing at Lovelace, has been a long and fascinating journey of discovery. I hope the learning never stops.

Thanks for the interview and all my best to your many readers.