Measuring Fat: The "Skinny" On Techniques

Body fat testing has many implications, associations, and undertones. The following will be a brief overview of the more common fat measuring techniques with advantages and disadvantages, risks vs. benefits, and costs reviewed. Learn more...

Body fat testing has many implications, associations, and undertones. Utilization can be for medical purposes—by a physician monitoring progress of a rigorous weight loss program, or inquiry by an athlete to help direct performance or appearance enhancing efforts. There are many options available for the inquisitive mind and body in the determination of body composition.

The following will be a brief overview of the more common fat measuring techniques with advantages and disadvantages, risks vs. benefits, and costs reviewed.

The evaluation of body composition permits quantification of the major structural components of the body—muscle, bone, and fat. Body fat testing not only determines what (approximate) percentage of total mass is fat, but also gives the amount of lean mass available. Since muscle makes the greatest percentage of lean mass—it is a good indication of how much muscle comprises a body.

Height-weight tables have been used in the past to determine if a person is "overweight", however such tables do not provide any information about the relative composition or quality of an individuals body. The term "overweight" only refers to body mass in excess of some standard, usually the average body mass for a given stature.

Being "above average" or "not ideal" by height-weight charts does not dictate whether or not you need to go on a weight loss program. Determination of body composition by one of the techniques listed and reviewed below is a much better determinant of what your body consists of.

Composition Of The Human Body

The total amount of body fat exists in two storage sites. The first site, called essential fat, is the fat stored in the marrow of bones, and in the heart, lungs, liver, spleen, kidney, intestines, muscles, brain, and spinal cord. This fat is required for normal physiological functioning (i.e. life).

In the female, this fat includes sex specific fat or sex characteristic fat. It is not known if this particular fat is expendable or serves as reserve storage. The second storage site is termed, storage fat. This is the popular fat that accumulates in adipose (fatty) tissue.

This "nutritional reserve" includes fatty tissue that protects organs and the stuff located directly under the skin. The proportion of storage fat is very similar in males and females (average 12% in men and 15% in women), the amount of essential fat is approximately four times higher in women. This is likely needed for child-bearing and hormone related functions.

For purpose of this article, lean body mass will be viewed as muscle and bone. Lean body mass does not necessarily indicate fat free mass. Lean body mass contains a small percentage of fat (roughly 3%) within the central nervous system (brain and spinal cord), marrow of bones, and internal organs. Lean body mass is measured in terms of density.

Body composition measurement can be assessed by either a direct technique with chemical analysis of your dead body (not a suggested way to test your fat... Has proven itself successful in the weight loss realm however...) or indirect technique, which includes all the forms mentioned here.

Avoiding technical jargon, the above-mentioned tests are very accurate at predicting body composition utilizing cross sectional pictures of the body that are then measured and transformed into a value for body fat utilizing mathematical equations. The measured fat thickness is similar to the fat folds measured in skin fold testing. Though very accurate, these tests are expensive, expose you to irradiation, and difficult to come by.

Underwater weighing is one of the best-known forms of body composition measurement. It utilizes Archimedes principle, which states that the volume of an object is equal to the objects loss of weight in water (assuming the density of water is equal to one).

Simply put, underwater weighing determines your body's volume and then your lean mass and fat mass (which have known densities) are calculated. Underwater weighing is probably the most validated indirect technique. It is fairly accurate and an excellent way to determine body composition.

The procedure involves putting on a swimsuit, obtaining a dry land weight, and then sitting in a plastic tubular chair suspended from a scale and submerged under water. The subject then makes a forced maximal exhalation (blows all the air out of the lungs) and lowers his or her head underwater for 5 to 10 seconds while the scale tells of your mass under water.

This is repeated a number of times to get a more accurate reading. When done correctly, the amount of air left in your lungs once you have completely exhaled (called the residual volume) should be recorded. It can be estimated, but this can cause significant errors in the test.

Underwater weighing has the advantage of being very well studied and tested and can be accurate in determination of body composition. It, like most things, is not perfect.

A number of variables are involved with the procedure including, but not limited to; the amount of air left in your lungs when submerged, differences in individual bone density, menstrual cycles, and others. It is also time consuming, as you must get wet for the procedure, it can be difficult to blow out all your air and hold your breath.

It is not suited for certain populations such as cardiac patients, the elderly, or extremely obese. Cost is variable depending on where you have it done and whether or not residual lung volume is measured or predicted.

The Bod Pod is one of the newest techniques for measuring body composition. Like underwater weighing it too determines body volume. It however utilizes air displacement instead of water. It is based on Boyle's Law (for you physics lovers out there) which states volume and pressure are inversely related. 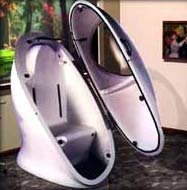 The volume of air is calibrated or measured in both chambers. Following, a person sits in the front chamber, which causes a change in volume and therefore pressure. This change is measured and, utilizing Boyles Law, the volume of the person is obtained. The Bod Pod can directly measure lung volume or utilize standard predictions based on gender, age, and height.

This procedure consists of putting on spandex like shorts and shirt as well as a swim cap to compress the hair (between the hair there is air therefore it will increase volume). The test subject is then weighed and data such as age, height, etc. is entered into the computer.

Following, the subject sits in the front chamber and breaths normally in a relaxed manor. The test takes approximately 60 seconds and a reading of fat and lean mass is printed out.

The Bod Pod has the advantage of being simple to use, quick, accessible to special populations, and very accurate.

The rationale for fat-fold testing is that there is a relationship between the fat located in the depots directly beneath the skin and that of internal fat and body density. A special caliber is utilized to measure the fat-fold thickness in millimeters as specific sites on the body.

The most common sites include the triceps, chest, subscapular area (back), suprailiac (hip region), abdomen, and upper thigh. Fat-fold measurement can be used two ways.

The first is to take the sum of all the measurements as a relative degree of fatness among individuals. The second way to use fat-folds is in conjunction with mathematical equations to predict percentage body fat. These equations are population specific and accurate when similar populations are tested.

Advantages to fat-fold testing are simplicity, accuracy when done by experienced persons, and excellent in detecting change when done by the same technician in the same sites, under similar circumstances.

Disadvantages include not being a part of a population utilized to determine values (i.e. a female being compared to a all male standard), variability in procedure, body proportions to large for caliber testing, inexperienced person taking measurements, etc.

Girth measurements are a simple procedure in which a tape measure is utilized to measure different areas of the body. Sites include the abdomen, buttocks, thigh, upper arm, forearm, and calf. Different prediction equations have been developed for different genders and age groups.

Advantages include ease of use and fairly good accuracy when equations utilized fit population specifics. Disadvantages consist of inaccuracy in the very thin or very fat and large error in muscular or resistance trained individuals.

The principle of body impedance is based on the concept that electric flow is facilitated through hydrated fat-free tissue and extra cellular water. Fat, due to its lower electrolyte content (therefore greater electrical resistance), will impede or prevent the flow of electricity from on electrode to the other.

Hence, the more the fat, the greater the impedance. With bioelectrical impedance, electrodes are placed on the hands and feet and a painless electrical signal is introduced and the impedance (resistance) to the electrical flow is determined.

In other words, if you are even the slight bit dehydrated, the values (percentage fat) will be lower. Over hydration will have the opposite effect and cause an increase in percentage fat. Skin temperature and ambient (room) temperature affect accuracy as well, with a warm environment causing a significantly lower reading than a cold one.

Advantages include ease of use and is excellent for the very obese for whom the compression of sub-cutaneous body fat is the greatest. Accurately detecting changes in different areas of the body is another advantage of ultrasound technique. Disadvantages include availability, and standardization.

There are many different ways to determine body composition no matter what your reason or goal. Many techniques come down to user preference, as all have their advantages and disadvantages.

In this authors opinion, fat, and all its connotations, need less emphasis. We should rephrase "What was your fat percentage?" to "How much lean mass do you have?" Whatever technique you utilize learn to focus on change, not numbers.

Be sure to monitor your (preferable) increase in lean mass with your (defiantly preferable) decrease in fat mass. If this is not taking place - time to reevaluate your dietary intake, your training, and possibly your goals. If numbers are important to you, be realistic with your target.

Talk to a health professional about a 'good' amount of lean vs. fat tissue with your body type, lifestyle, family and work schedule, medical history, etc. Reality has its basis in perception; sometimes perception needs to be changed to make a reality more 'real'.