Brian Used Bodybuilding To Help Rise Above His Cerebral Palsy!

After being told what he couldn't do for most of his young life Brian chose to take his destiny into his own hands and decide for himself what he could do. Read his amazing transformation story!

Things all started when my twin brother Adam and I were born premature in November of 1982. After a short time my parents noticed I wasn't progressing normally when it came to walking. Shortly thereafter I was diagnosed with a condition called Cerebral Palsy (CP) which is a movement disorder that can affect different parts of the body and the way they move. The type I have is known as Spastic Diplegia, which affects only the lower extremities (legs). For me, it turned out to be minor, but this was not known at the time and a doctor told my parents I would likely never walk and he would be surprised if I did. My parents could've just accepted the doctor's prognosis, but thankfully they did not. My work ethic stems from them and they put forth a tremendous effort in order to get me to walk. On the day of my 2nd birthday exactly, I did just that. 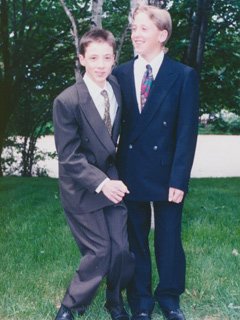 Click To Enlarge.
Bryan With His Twin Brother Adam.

Growing up I had many friends, but, I had two things working against me that caused those around me to doubt my capabilities; I was small and I had CP. I was apparently an easy target, but was determined to not accept this as my role. During my childhood and into adolescence I always had to prove myself. At first I was referred to as too small and weak. Some even assumed that because I had a physical hindrance I was also unintelligent and that it affected me mentally; on the contrary, intelligence and mental toughness is what aided in my success. I never let anyone discourage me from doing what I wanted to do and I used the words of those who doubted me as fuel to prove them wrong. In school, I had some minor issues but thanks to my friends around me and my attitude I was able to stand up to anything and anyone who saw me as someone they could push around.

When I started to play sports at 9, I was thought of as too slow. I knew that truthfully I wasn't the fastest and I wasn't the biggest but what I did have was determination, tenacity and intelligence. While others could rely on athletic ability alone, I had to rely on my will to compete, my attitude and my mental awareness; they are what made me better. Admittedly, I was never the best, but after a short time I gained the respect of my colleagues both in school and in sports. For a long time after this, things were going well for me until my freshman year of high school when my physical health took a turn for the worse.

Like any normal teenager I was growing (though still small at this time), this combined with the fact that I had CP seemed to take a toll on my body and joints. After an appointment I had with my doctor in Toronto it was determined that the following October, October of 1997, I would have to have major surgery. At the time I was not happy about this, but knew it had to be done because my ability to move and do things the way I wanted to do them was becoming harder and harder. The surgery was not guaranteed to be a success, but I didn't really have a choice. Fortunately my family and friends were always there to keep me motivated and positive. It was not a simple operation as they had to lengthen both my hamstrings and re-construct my right hip in an attempt to give me more flexibility and less joint pain.

The day came and the procedure was an apparent success although the rehabilitation I had ahead of me would not be easy. The whole process had taken its toll on me and I had lost a bit of weight during the initial days of recovery. I was down to about 85 pounds at my lowest point. I knew that something had to be done to get my strength up. At the time I had an excellent physiotherapist who helped me a lot but when I returned to school still in a wheelchair, I was not happy with the way things were going. 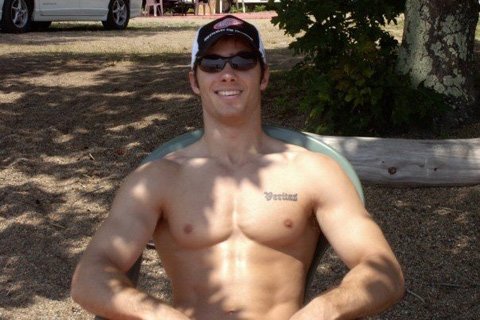 Click To Enlarge.
I Never Let Anyone Discourage Me From Doing What I Wanted To Do And I Used The Words Of Those That Doubted Me As Fuel To Prove Them Wrong.

My Phys Ed. teacher, Mr. Jim Pedatella, and another teacher, Mr. Mike Yanni, had created a workout program for me and from here my passion for the gym was born. At first, I started training out of necessity; to gain some weight back as well as learn to walk and gain strength in my legs once again. The process was slow but after a short time I felt at home in the gym and was motivated to make a fast and complete recovery.

As time passed I became more fit and stronger than ever before. Another year had passed, it was 1998 and I was in grade 11(my junior year of high school). I was feeling better than ever and people were now even referring to me as a jock. I am not one to stereotype, but this implied that I was strong and athletic, something I didn't mind embracing.

During this time, I had one more meeting with my doctor from Toronto and after a short check-up he came to the conclusion that at some point shortly after high school my body would likely begin to deteriorate and I would be forced to either use crutches or a walker, and eventually be confined to a wheelchair. I remember thinking to myself, 'this guy has no idea what he's talking about,' but, he just didn't know WHO he was talking about.

Roughly 12 years have passed since that last meeting and I am now a 27-year-old man living in Sault Ste. Marie, Ontario, Canada in the best shape of my life. I feel great and am able to do more now than I ever have. I have a consistent workout routine that works for me; I eat good foods that promote energy, strength and overall health. I surrounded myself with good people over the years who have enriched my positive attitude; many of whom I owe much of my success in the health and fitness world.

Thank you to Jim Pedatella and Mike Yanni; without them I would not be the man I am today. Thank you to my friends in high school (Cougar and company) and beyond; my friend and mentor G.B.K. who would've been a Canadian Olympian at the Beijing Olympics had he not passed away in 2005; and to John Perron and Rob Calvano who have helped me with my recent training goals. My success and overall health would not have been possible without their support or the support of my family. For their efforts I am forever grateful. 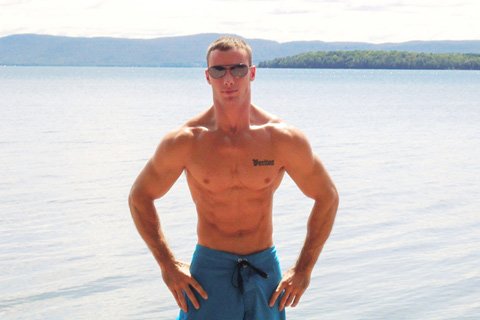 Click To Enlarge.
I Have A Consistent Workout Routine That Works For Me; I Eat Good
Foods That Promote Energy, Strength, And Overall Health.

Note: Supplement dosages and schedule listed below in Diet section.

Overall I like to keep myself lean and attempt to consume at least 150 grams of protein per day (my weight in grams) but you should find a diet that works for you and keeps you energetic and healthy depending on your personal needs/goals.

Often I train for explosive speed and power (not strength or mass) with my goal being to stay lean and ripped. I normally do 3 exercises per body part, 8 sets per exercise, and 10 reps each set (with 1 minute of rest in-between sets). Currently I am training with my goal being to obtain some extra mass and strength. That is the program I will show you. It's called a 5x5 program in which I do 3 exercises per body part for 5 sets of 5 reps per exercise with 2-3 minute breaks between sets. When I am attempting to stay lean I apply many of the same exercises but just change the reps and sets from the 5x5 to what I mentioned before when staying lean. When doing the 5x5 I increase the weight the next week for any exercise that I was able to do 5 sets of 5 reps without failing. Increments are slow; usually 5 to 10 pounds at a time depending on the exercise. I am doing 5 sets of 5 reps for each exercise with 2-3 minute breaks unless otherwise mentioned

Note: I keep all exercises moderately slow on the way down and medium pace on the way up for maximum control. Your grip has to feel good for you as it depends somewhat on arm length. Just remember not to move your hands too far in as the focus will then be on triceps; If you move them too far out you will lose any good range of motion and risk shoulder damage) It is okay to not always touch your chest when going heavy but remember that touching the chest and then pressing helps in promoting good range of motion and overall true bench press strength. The further out the hands the more you are working outer chest. I always try and keep my chest out but my core tight. I avoid arching my back to much because it can lead to injury.

Note: My leg workouts are different than most. I keep my legs active throughout the week when doing cardio and plyometrics but I would recommend that if possible you should include power exercises like squats as well as hamstring and calf exercises. 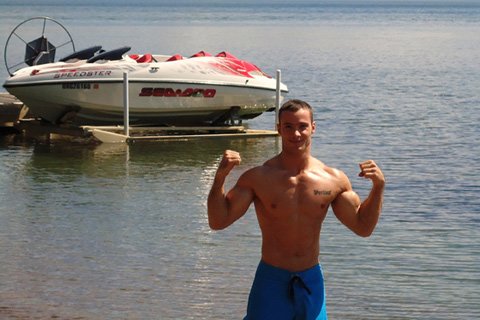 Click To Enlarge.
Often I Train For Explosive Speed And Power (Not Strength
Or Mass) With My Goal Being To Stay Lean And Ripped.

My message to everyone is to never underestimate where determination, the desire to compete, or the want and need to be better will get you. You have the ability to transform yourself into whatever is desired as long as you're willing to put in the effort.