When life just won't spare you an hour to go to the gym, this supercharged, Tabata-based, full-body workout will leave you gassed in less than 20 minutes!

I'm a busy mom with three little boys running around the house, so I can't always block out time to go to the gym for an hour. What I can do, however, is bust out a short workout while the kids are napping or watching television. A short home routine with minimal equipment doesn't need to be low intensity, though. My rest-less workout uses dumbbells, a kettlebell, and Tabata intervals, which will have your heart racing and your muscles screaming!

If you've never tried Tabata, it's about to become your new best friend—well, one of those best friends with whom you have a love/hate relationship, anyway. Tabata normally consists of 20 seconds of work followed by 10 seconds of rest, repeated for a total of eight times, which allows for an intense workout in only four minutes. This workout kicks it up another notch, though. Instead of resting, you'll use those 10-second intervals to squeeze in yet another exercise. Some work your core, while others are straight-up lung burners.

Timing yourself is important; the 10- and 20-second intervals are what set the furious pace and keep the intensity elevated. You can use the stopwatch feature on your phone; however, I like apps designed for HIIT and Tabata, such as Tabata Stopwatch Pro, because they let you program the intervals in ahead of time. Pausing to reset the stopwatch on your phone just brings down the intensity of the workout, lessening the impact of these fast-paced intervals.

In fact, I strongly encourage you to complete the entire 20 minutes without taking a break, if possible; it's called the "rest-less" workout for a reason! If you absolutely do need to rest, keep it to a minimum, and jump back in as soon as possible.


I love this exercise because it really works your upper body and chest, and elevates your heart rate. You'll feel what I mean when you're busting out those pull-ups between rows!

Set your dumbbells in front of you, and stretch out into a plank position, as if you're about to do a push-up. You can do a straight-arm plank or a plank on your forearms. Choose whichever is more challenging for you; you're only holding it for 10 seconds, and the point is to push yourself hard here. Don't allow your back to sag, and don't push your butt into the air. If you're new to planks, try practicing in front of a mirror to check your form. Your body should be straight like, well, a plank. 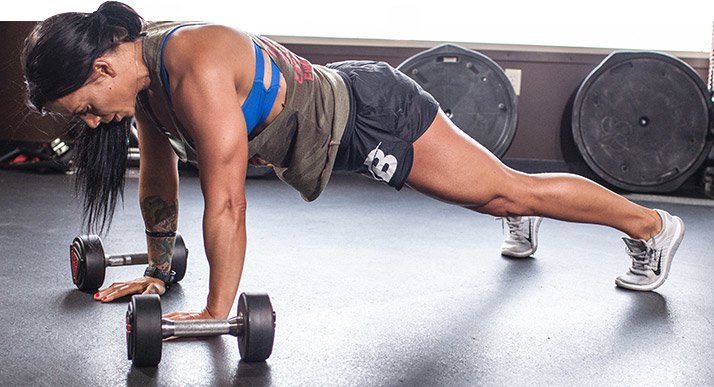 Hold a dumbbell in each hand, and sit in a full-squat position with a dumbbell at each shoulder and an elbow at each knee. Your feet should be slightly wider than shoulder width. Extend straight up to a full standing position and press your hands overhead. Then bring your arms back down as you return to the squat position. Try to come all the way back down to where you began. 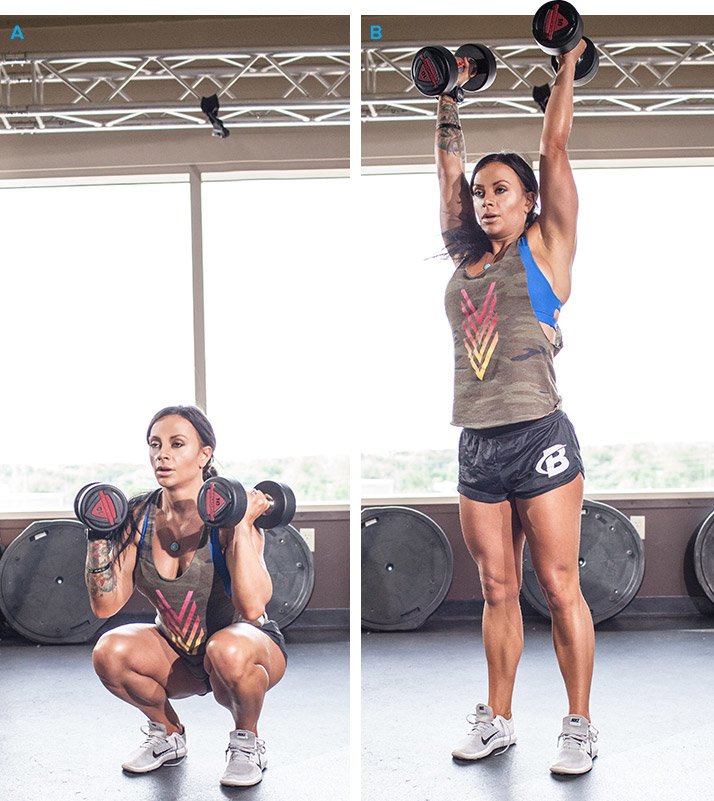 Set the dumbbells down in front of you, and assume the plank position again, feet slightly wider than shoulder-width apart. Bring your right hand up to touch your left shoulder and set it back down. Repeat with the other arm. Don't rock from side to side when performing the shoulder taps, and keep your core, legs, and glutes engaged for the entire 10-second interval. 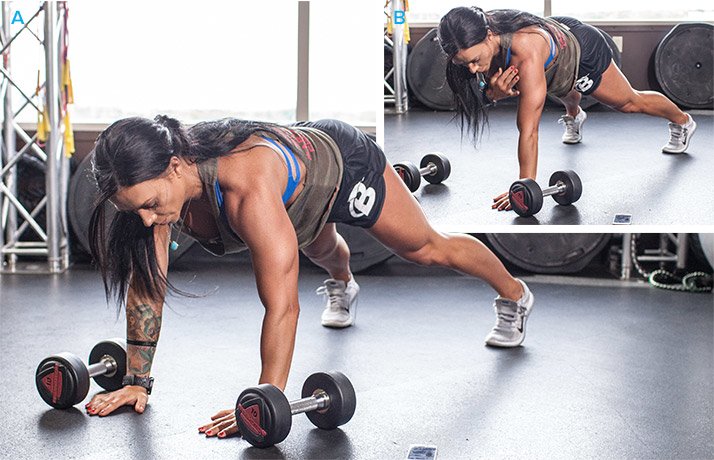 I refer to these as "eight-count bodybuilders" in the video because there are eight—yes, eight—motions in each one. First, drop down to a straight-arm plank position. Next, jump your feet apart, then back together into a narrow stance. Perform a single push-up, hop your feet up by your hands, and jump straight up into the air with your arms extended above you. It's a lot like a burpee, with a few extra steps.


If you absolutely feel you need a break at this point, pause your timer, take as short a break as possible, and get right back to the workout.

Begin with your feet shoulder-width apart. Make sure your feet are in line with your shoulders, and your knees are not travelling over your toes. Keep your core engaged and your chest and shoulders up and back. Perform full, deep squats for 10 seconds. 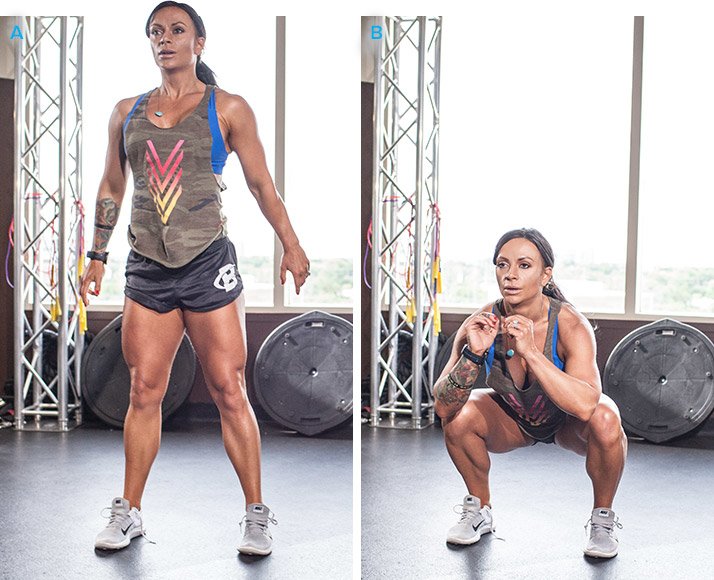 If you don't have a kettlebell, just use one of the dumbbells. Stand with your feet shoulder-width apart, grasp the end of a kettlebell or dumbbell with both hands, and swing it upward from between your knees. The key to kettlebell swings is to engage your glutes, quads, hamstrings, and hips. Keep your core nice and tight, and let the momentum of your squat bring the weight up. 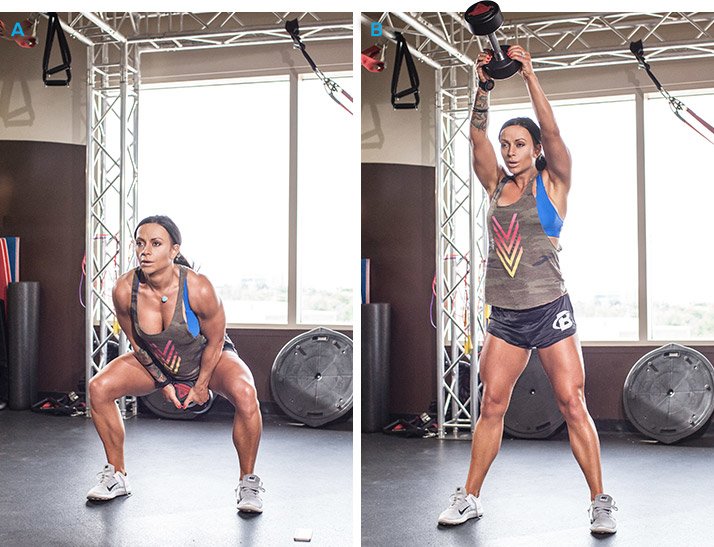 
Some of people think this is an upper-body exercise, and that you're just trying to lift the weight, but the momentum and power actually comes from your hips.

BAssume a lunge position. Explode upward as high as you can while reversing your foot placement. Land on your toes, rather than flat on the balls of your feet, and roll your foot down into a proper lunge, making sure the knee of your front leg does not travel out over your toes.

The rest-less workout is a great option for those days when you need to push yourself hard in a short amount of time. However, it also makes a great finisher for the end of your existing workout. You can even use it as a warm-up to get your blood pumping and energy surging before you hit the heavier weights. However you choose to use it, make sure you keep the pace fast and furious!