From Attitude To Timing, Learn The Secrets To Get F@#cking HUGE!

Right now, you're reading this because you want the answer. You want to know the "secret", the final word on gaining real weight. Well listen up, cause I'm only going to say it once: there is no secret. There is no magic pill that's going to put real meat on your bones. Like everything else in life worth having, it takes good old-fashioned hard work and dedication. Yeah, I know you didn't want to hear that, but it's the truth. So if you're looking for a quick fix answer, just pickup muscle magazines. But if you're tired of the bullshit and want the straight facts, keep reading.

If you want to gain weight, you have to approach meals with the same intensity as you approach training. Just how important are your meals during a gain? Let me put it to you this way. I'd rather miss a day of training, than miss a single meal. You got to get in this frame of mind. You also have to realize that when it comes to bodybuilding nutrition, there are no one-size fits all approach. In fact, there are no hard and fast rules. Yeah, I'm going to give you a guideline complete with numbers, but as a serious bodybuilder, you need to apply them to your own situation. Listen, I'm not going to lie to you. Gaining weight is work, just like dieting is. It's hard. It takes discipline, just like training. But don't get discouraged. Keep at it and at the end of the tunnel, you'll have a massive physique.

First things first. Sit down with pad and pen, and write down a schedule for a meal plan that you will never deviate from. Be sure to write it down. If you do, you'll be less likely to fall off the wagon. Aim for about six meals every single day. This works out to a meal every 2-3 hours apart. Let's say you sleep 9 hours every day, like me. This means you got 15 waking hours to squeeze in 6 meals. This means you got to eat every 2 1/2 hours from the moment you get up in the morning.

Like I said before, once you write your schedule down, never deviate. Why? Because your body is begging for regimentation. It needs it. When you're training hard, you're body will come to depend on the nutrients at that same time every day. For example, if you eat everyday at 11am, but you miss that meal, you're body will start to cannibalize your hard-earned muscles.

So your first meal should come right when you wake up. Your last meal can come right before you go to bed. Now some so-called "experts" will tell you not to eat before you go to bed. I say screw them. As long as you don't eat pasta or candy before bedtime, you'll be fine. Remember, during the time you sleep, your body is essentially starving. So feed it. Oatmeal with protein is what I eat. More specifically, I take in 10 egg whites, a cup of whole oats, and a piece of fruit.

"People always ask me, "How do you get 22" guns?" Take your Flintstone vitamins. For most of these guys, if I told them the truth, they wouldn't want big arms anymore."

In my experience most people don't have any common sense. The "more is better" mentality runs rampant. People want shortcuts, immediate results. Not in this sport. You need time to succeed, to find out what works and what doesn't. People always ask me, "How do you get 22" guns?" Take your Flintstone vitamins. For most of these guys, if I told them the truth, they wouldn't want big arms anymore.

So if you're that 200 lb. guy, you have to resist the urge to start with 4000 calories all at once. Whether you're gaining or cutting, don't use shock tactics. Never blast your body with huge calorie increases or decreases. It's so hard to earn just 1 pound of quality muscle, why screw around with a shock diet that will make you lose half of that 1 pound? Let's say you go from eating 200g a protein per day to 400g. How is your body going to be able to metabolize it? It'll probably crap half of it out. Plus, it'll be so hard eating so much so soon, you'll probably quit after two weeks. Remember, take your time. It's all about increments. Start slow, and build on it gradually.

Let's talk about ratios of protein, carbs and fat for a gainer's diet. Here it is: 50% protein, 35-40% carbs, and 10-15% fat. Another way to think about this is 2g protein per pound of bodyweight and 1.5g carbs per pound of bodyweight. As for fat, I don't specifically add it to my diet. The fat comes naturally in the foods I eat like eggs, chicken, and beef. As protein is the most important element here, be sure to take in protein with every meal. So if we're talking about that 200 lb. Guy, he should start with 400g protein and 300g carbs every single day. Divide this by 6 meals, and you get 67g protein, 50g carbs, and about 20g fat for every meal. This is a guideline for a basic gainer's diet.

As for foods, there are a lot of good choices. My preference for protein is lean beef (sirloin, ribeye) and chicken. But I also eat a ton of eggs, turkey and fish. I'll eat 5-6 dozen whole eggs per day. Look for your best deals and your best cuts. My meat bill alone is over $150 per week. I also happen to depend a lot on protein powders. Get most of your protein from whole foods first and use supplements only when necessary.

As for carbs, I'm different than most other bodybuilders. I pick one carb source and stick with it. I've learned that my body doesn't well on pasta, rice, bread and other starches. Over 90% of my carbs come from oatmeal. Not instant oatmeal, but plain, old-fashioned whole oats. Oatmeal works for me. My body processes it well. It's also a good source of fiber. I eat at least 500g of oatmeal every day. That's 2000 calories right there. Like I said before, I don't add fats like olive oil to my diet. If I eat natural peanut butter or salmon, I add the fat that's in there. Every week my grocery bill totals more than $500. When it comes to bodybuilding, you can't afford to eat junk. A bodybuilder's diet is expensive. But this is another sacrifice.

Remember to treat everything I said as a guideline. Why? Because there are other factors which will affect weight gain, like genetics, training frequency and intensity, and other things. For example, you could be a hardgainer and need an extra 500 calories. Maybe it will be 1000 calories. But at some point, the weight will stick. You'll reach that number. So this is the most important piece of advice I'm going to give you. It's common sense, but most people forget it. Experiment. Examine yourself. Rip things apart until you start seeing results. Bodybuilding is about constant analysis. This is why it's important to log everything down-how many calories, how many grams of protein, what kinds of carbs.

This is how bodybuilding is like a science. You change one thing, and you watch for results. You change another, and see what happens. Sooner or later, you'll find what works for you. Eating is work. For Joe Average, you don't need to do this. But if you're looking to take your physique to the next level, you have no choice. Let's say 15 calories didn't work after 4 weeks. You feel strong in the gym, but you haven't gain any real weight. Go to 17 calories per pound of bodyweight. Do this for another 4 weeks and gauge your results again. Keep going. Analyze. Reanalyze. You can do this, or just play guessing games like most people do. I can't afford to guess. I don't have the time or the luxury to guess.

I got lucky. I've got good genetics. I also got hooked up with a bunch of powerlifters who showed me core exercises and outlined a rough diet. It was ugly, but it worked. Sure, I had a big belly. I weighed 342 pounds at 5'11". I could deadlift and squat over 700 pounds and bench 500. I had 26" arms. Then a friend talked me into doing a bodybuilding show. I researched everything I could about bodybuilding. I cleaned up my diet. In the first two weeks, I dropped 30 pounds. I started with the cardio. I threw in the thermogenics like Animal Cuts. Gradually, I increased my cardio. By the end, I was damn near doing 2 hours of cardio per day, training, plus posing. When it came to the day of the show, I had dropped 90 pounds to 252. I won the super-heavyweight class at my first show after only 3 months of dieting and training. Today, I'm still huge, but I've got abs too. 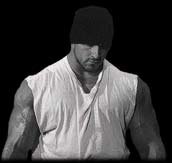 When it comes to nutrition, the east coast is ignorant. The west coast has been doing it right for years. But, the west coast doesn't train as hard. You combine proper training and nutrition, and you'll get somewhere. Most people are looking for an easy answer. For them, it's about combining drugs, training and nutrition, in that order. Sorry, but these people are sadly misinformed. Anyone can use gear, eat like a slob, and put on weight. But they'll be another juicehead.

"In my book, what matters is attitude... As my father used to say, if you're involved in something, take pride in it, or get out."

My priorities are guts, balls and heart. What separates first place from third place is discipline, dedication, and hard work. Too many bodybuilders wander this earth wearing sunglasses and acting like rock stars. There are too many rock stars in this world. How can you expect people to respect bodybuilders when we act like celebrities? In my book, what matters is attitude. I don't want to be involved in this sport if I don't have any dignity or respect. And respect comes from training your ass off, and doing things right. Not taking the easy way out. As my father used to say, if you're involved in something, take pride in it, or get out.